Conor McGregor has become a polarizing figure, straddling the line between sports and cultural icon. But his meteoric rise also tips the scales between love and hate.

What is it about “The Notorious" that provokes such strong emotion?

His intention was clear. McGregor had come to the UFC not to take part, but to take over. From the beginning, it was hard to ignore his presence.

Soon, McGregor became the symbol of a patriot for many in his native Ireland, representing the pride of thousands of Irishmen who followed him across the globe to witness every possible scenario. For others, he was simply the villain who insulted their countries with inflammatory comments about their native fighters.

McGregor can be refined and serious, wearing custom clothing made to measure and the dark glasses of celebrity. Without uttering a word, he can be an imposing fashion figure, one whose contemptuous glance is sufficient to diminish his rivals.

Other times, McGregor is the contrary. He extols his street experiences, forgetting that the elegance of his dress is in sharp contrast with often-vulgar words, insults and grotesque gestures. The end result remains the same: Break your opponents.

Today, McGregor has transformed into a Midas King who cashes in gold and knocks out everyone and everything he 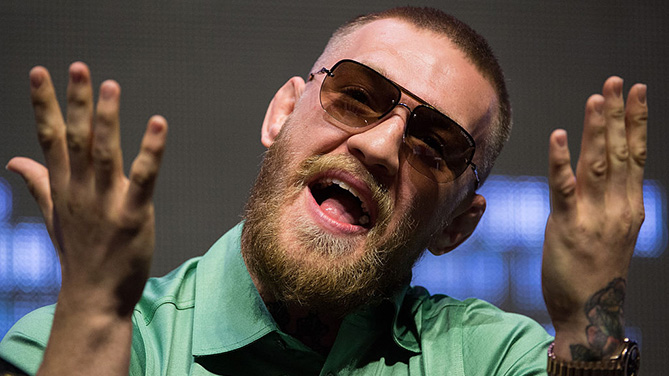 touches. He is the role model for so many, regardless of age, who see in McGregor what they wish they could be – wealthy, successful, invincible and called out by the multitudes.

However, for many others, McGregor has blurred the image they have of what it means to be a gentleman. Has he forgotten about humility, contradicted what we think is right and wrong?

In the end, there is something binding all – a desire to see McGregor compete, to watch his fights and judge for yourself.

Cristian Villegas is a digital producer for UFCEspanol.com