Carlos Condit: The Killer Rocks On

"We are both hungry, fiery fighters who always come to fight and the
combination of all those things I believe is going to make for a really
exciting fight." - Carlos Condit 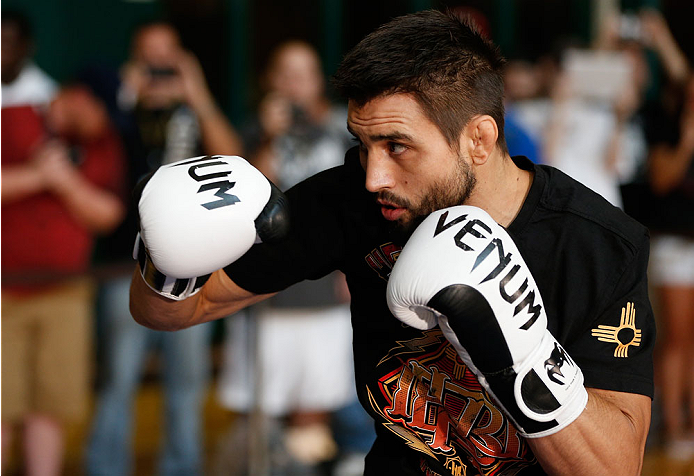 There is little doubt lingering around someone’s intensity when their nickname is “The Natural Born Killer”.

For top UFC welterweight Carlos Condit - one of the fight game’s most decorated finishers -that moniker is well suited and it’s one he’s backed up time and time again.

But where the name in full refers to an Oliver Stone film masterpiece, it’s the “killer” part which can take on multiple meanings for Condit. The rangy Albuquerque native’s full tilt performances inside the cage have built the reputation and expectation that when his name is on the card, he’s bringing gasoline and fireworks, and it is that particular brand of showmanship which bears to mind another man with “killer” in his nickname.

When Jerry Lee Lewis was slated behind fellow rock n’ roll icon Chuck Berry at “Alan Freed’s Big Beat Show” in 1958, the mercurial Lewis poured a bottle of gasoline on his piano and set it aflame while he ripped through his Great Balls of Fire finale. While Condit may not have been picked up at the gates of Graceland calling out Elvis with a shotgun in hand, he has absolutely brought his brand to fight to the royalty of the welterweight division.

The 29-year-old Jackson’s MMA fighter has won multiple championships throughout his career, including the WEC welterweight strap and the interim UFC title, but it has been his time competing on the sport’s biggest stage that has put who Condit is as a fighter into focus.

After being edged out by Martin Kampmann in his promotional debut back in 2009, Condit went on to win his next five outings in impressive fashion.

He rebounded from rough starts to defeat Jake Ellenberger and Rory MacDonald, knocked Dan Hardy into a different time zone at UFC 120 in “The Outlaw’s” home country, and blistered Dong Hyun Kim with a flying knee at UFC 132 in Las Vegas.

That run of success - and a few crazy twists of fate in the title realm - had Condit standing across from Nick Diaz at UFC 143, where he went on to become the interim welterweight champion.

Nevertheless, where Condit once sat atop the 170-pound division, his current situation has a different point of view. He has dropped a pair of hard-fought decisions to welterweight king Georges St-Pierre and current No. 1 contender Johny Hendricks that have pushed him to the edge of the title radar in a weight class packed with potential contenders. If he has any hopes of regaining his footing in the title conversation, the backslide has to stop in his next outing.

That opportunity will come when he faces Martin Kampmann tonight at UFC on Fight Night 27. Not only will Condit have the chance to put the brakes on his recent rough patch, but he’ll also have the rare opportunity to avenge a past defeat when he squares off with “The Hitman” in Indianapolis.

“I’m absolutely ready,” Condit said. “I’ve been working really hard for this fight and I’ve had an amazing camp. I can’t wait to go in there and show what I’ve been working on and just throw down. I want to show the fans what a fight is - what an exciting fight is - like I always do, and ultimately walk away with the win.

“Our history is definitely motivation going into this fight. He put a halt to an eight fight winning streak I had going on. It was my UFC debut and I lost a really close split decision. It hasn’t haunted me, but it has definitely been in the back of my mind as something I want to rectify and I want to get my vengeance against him.”

Throughout his career, Condit has been heralded for his striking prowess. Working behind a diverse attack of unorthodox combinations and his ability to capitalize on the smallest windows of opportunity, the New Mexico-based fighter has doled out punishment in a variety of fashions.

That being said, in the bouts where he’s found himself on the opposite side of the action, the holes in his wrestling game have been where the opposition has gained the upper-hand. In order to shore up that aspect of his skill set, the former title challenger enlisted the services of former Olympian Jake Herbert and grappling specialist Ricky Lundell to assist in his preparation for Kampmann.

While the wrestling exchanges may have tipped the balance in their first scuffle, Condit has worked diligently to make sure that won’t be the case in Indianapolis.

“In my last couple of fights, the wrestling is really what made the difference and I’ve made it a point to really work on my wrestling,” he said. “In my first fight with Martin Kampmann wrestling was a big part of the reason I lost that fight as well. I made sure I was working on that and my wrestling has really improved since my last fight. It has been amazing working with those guys.”

While both Condit and Kampmann have been fixtures in the upper-tier of the welterweight division for the past several years, when they meet in Indianapolis, each fighter will arrive having traveled an unfamiliar course. The former interim champion will enter the Octagon having lost his two most recent appearances, while Kampmann found himself in the loss column after his last showing as well.

Condit recognizes the weight of the situation at hand and also acknowledges the improvements his opponent has made in his game since their last go around. He understands the consequences on the line at UFC Fight Night, and with this tilt being scheduled as a five round affair, he believes they will have all the time necessary to settle things once and for all.

“Martin and myself are both on shaky ground,” Condit said. “We’re both exciting fighters, and we are both staples of the welterweight division, but it’s a crazy game and you never know. We are all one or two fights away from getting a pink slip. It could go really well for the winner and kind of bad for the loser. I’m ready to get in there and get it finished, but I’m ready to earn my money that night. I’m ready to go all 25 minutes if need be.

“He’s definitely improved. I see massive improvements he’s made when I watch his fights and watch tape on him. I know that I’ve improved on a lot of different levels. There is the back story of the close split decision fight. There is the fact we are both coming off losses and this could be a do-or-die fight for either of us. But put that aside, and we are both hungry, fiery fighters who always come to fight and the combination of all those things I believe is going to make for a really exciting fight.”