Carlos Condit and The Fight For Everything

"Georges is an incredible fighter, one of the best that’s ever graced the
sport, but he is a man, he does have weaknesses, and he can be beaten." - Carlos Condit 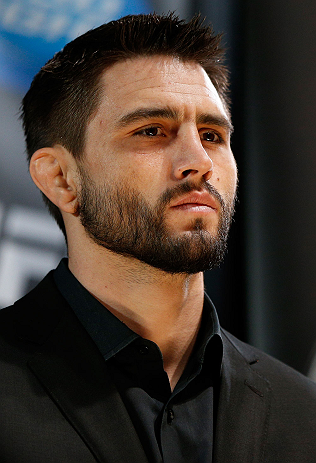 You could say that Carlos Condit used to be a little reckless when it came to his fighting career, especially in the rings and cages where he built his reputation, and where he could have easily switched out “Killer” for “Fighter” in his “Natural Born” nickname.

In 2004, he fought six times. He “slacked off” in 2005 to five trips into sanctioned battle. But then in 2006 he fought a remarkable seven times, remarkable by the fact that his dance card was filled with names like Jake Shields, Pat Healy, Frank Trigg, and Renato Verissimo.

It was after this year of punches, kicks, takedowns, and submissions that Condit signed with the WEC and truly kicked off his trip to the next level of his career. In his second WEC fight he won the organization’s welterweight title, successfully defending it three times before moving to the UFC, where he has gone 5-1 while earning the interim 170-pound crown that he will attempt to unify with Georges St-Pierre on Saturday night in Montreal.

That’s a lot of fighting, a lot of movement, and a lot of success. Does he ever long for those “old days” when he was fighting five to seven times a year?

“You gotta remember that it’s just not the punishment that you’re taking in the cage while you’re fighting; it’s the training camps,” said Condit. “And a lot of times the training camps are more brutal than the fight is, or hopefully it is. So since you’re taking your body to training camp after training camp after training camp, it can take a toll on you mentally, physically, and emotionally. And I’m at a different point in my life now. In 2006, I was a bachelor, and I didn’t have much going on as far as my personal life. Now, I have a wife and a kid and I try to dedicate as much time as I can and give a hundred percent in the gym, but I also give a hundred percent at home and be the best dad I can be.”

In other words, Carlos Condit saves his reckless for the Octagon these days, and it’s that maturity in his approach to the sport and his career that makes him more dangerous than ever heading into the most important fight of his life. And after beating Nick Diaz in February for the interim belt, Condit wasn’t going to jinx that fight by defending his belt before St-Pierre was cleared to return from an ACL injury. Not to say that it was an easy choice though.

“I was very conflicted,” he said. “I would have liked to have fought. There were some guys that were definitely right there in the contender’s spot, but after consulting with my management and my family, we decided that the fight with Georges made the most sense. I’m trying to make big steps forward in my career, fight the biggest fights I can, make the biggest rewards for the risks that I’m taking, and the fight with Georges St-Pierre fit the bill.”

So after coming to peace with that decision, Condit’s waiting game began, as he hoped that St-Pierre would be back in action on schedule. And while he laughs when asked if kept hitting the refresh button on Twitter for updates during GSP’s recovery, he did keep a close eye on the situation.

“They were posting videos periodically about his recovery and everything, so I was watching those,” he said, “and the whole time, the word coming out of his camp was that he’s looking good, his recovery’s right on track and he’s looking better than ever, so that was always encouraging, so I didn’t have too much worry that he’d be ready to fight this year.”

Now the waiting’s almost over, and Condit’s chance to rule the welterweight world is just a day away. It’s a lot different atmosphere for the Albuquerque native than it was at UFC 143, when you could cut the tension with a knife not just on fight night, but in the weeks leading up to the bout, as camera crews followed Condit and the enigmatic Diaz around for the UFC Primetime show. It’s the same scenario for him now, but as he points out, “I’m just more comfortable with it this time around. I’m more accustomed to it, having more of a smile on my face, and kind of able to be myself a little more, which is cool.”

As for his time around Diaz, which was probably a complete 180 from what he is experiencing with St-Pierre, Condit admits that “Diaz actually was pretty respectful. He was uncharacteristically cordial to me for whatever reason, so there wasn’t that animosity between us. But I’m not one to play into the hype and the beef before a fight. I have respect for anybody who is at this level in this organization. I know what they go through to get here and especially a guy like Georges. He’s respectful, I have a lot of admiration for him, but ultimately that all goes out the window when the cage door closes.”

That’s as expected, and no one is wondering what Condit will bring to the table on Saturday. He’s an open book: well-rounded, fight-stopping power, good submissions, tenacity, and all the intangibles you expect from an elite fighter. It’s GSP who is the wild card this time, coming off the knee injury and a nearly 19-month layoff. The champion from Montreal says he is as good as he’s ever been, and if every fighter says they are preparing to face the best version of their opponent, what does Condit see as the premier representation of St-Pierre?

“I would probably say the Jon Fitch fight,” he said. “Jon Fitch is an incredible fighter and Georges just absolutely dominated him. Fitch wouldn’t go down, but Georges used a lot of different aspects of his game to just basically shut Fitch down.”

So how does one prepare to beat the best GSP?

“For starters, I have to look at myself,” said Condit. “I have to see where I need improvement in my game, and really work hard to make those gains. Next, it’s watching a lot of video, talking to my coaches, gameplanning, and also just realizing that Georges is an incredible fighter, one of the best that’s ever graced the sport, but he is a man, he does have weaknesses, and he can be beaten. So I try not to build him up so much in my head.”

And some say that for Condit to win, he needs to put doubt in St-Pierre’s head immediately, push the pace, and make GSP feel every second of that 19 month layoff. With an almost sinister chuckle, “The Natural Born Killer” agrees – sort of.

“I think I would do that whether he was coming off an injury or he wasn’t, whether it was a title fight or just a regular fight,” he said. “That’s my approach anyway. Right off the bat, just go out there and try to punch him in the face and try to get this guy before he gets me.”

That sounds like a reckless fighter right there, but it’s also what got Carlos Condit to the main event of UFC 154 and one win away from being the undisputed welterweight champion of the world. This time, he doesn’t really agree when it comes to what his best attribute is. He thinks his greatest gifts lie elsewhere, so after asking the earlier question about the fight where GSP was at his best, I posed the same query to Condit about himself. He paused, but only briefly.

“At this point, maybe the fight against Rory MacDonald,” he said. “There were times in that fight where I was facing some adversity and I was down on the cards, and I was able to turn it around and dig deep and pull off the win. It’s great to exhibit your skills and abilities and everything, but what’s really cool about the sport is showing heart, showing determination, showing tenacity, and showing these aspects of a person and of human nature that you can’t really out your finger on.”