LAS VEGAS, July 5 – The streak continues. Bantamweight contender Urijah Faber, the man who has never lost a non-title fight in a career that spans 38 fights and nearly 11 years, walked away a victor once again Saturday, turning back a tough challenge from Alex Caceres to submit the Ultimate Fighter 12 alum in the third round of their UFC 175 prelim bout at the Mandalay Bay Events Center.

An entertaining scramble in the clinch kicked off the bout, with a stalemate against the fence being the result until the two frantically fought for position once again, this time with Faber getting the takedown in the second minute. Faber kept Caceres on the mat for the remainder of the round, though a late scramble at the end of the frame did get the crowd back into it.

A right-left by Faber jarred Caceres early in round two, allowing “The California Kid” to get his opponent to the canvas again. This time, Caceres was able to get out of trouble and back to his feet, and a lead right uppercut got Faber’s attention. The former WEC champion was able to dominate at close range, but while at long range, the lanky Caceres had some success. Unfortunately for “Bruce Leeroy,” the majority of the fight took place at close quarters.

Caceres came out fast for the final round, but Faber met him in intensity, and when the two hit the canvas, Faber took the Floridian’s back, and from there it was academic, with a rear naked choke forcing Caceres to tap out at 1:09 of the frame. 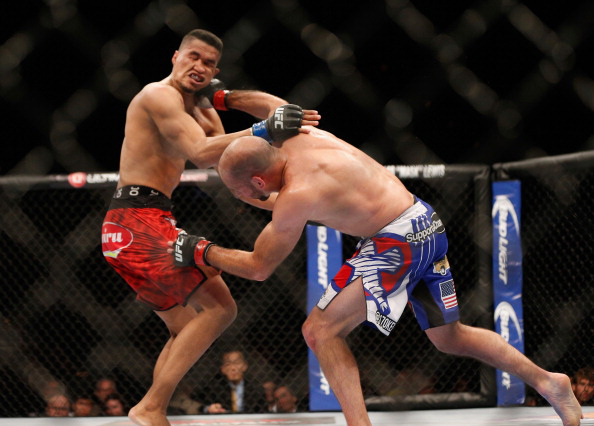 Robertson took over from the start, getting Alcantara to the mat and keeping him there for the entire frame, letting loose with enough strikes to avoid a restart by referee Chris Tognoni.

Alcantara was able to stay upright for two minutes in the second frame, but soon he was back on the mat, with Robertson continuing to get his strikes off with little resistance. With under two minutes left, he took the mount position and looked for a submission in the midst of his striking assault, but Alcantara made it out of the round.

Two accidental low kicks by Robertson didn’t make matters any better in the final round, and when it came to everything within the rule book, the Illinois product didn’t slow down either, controlling the bout on the feet and on the mat to sail to the victory. 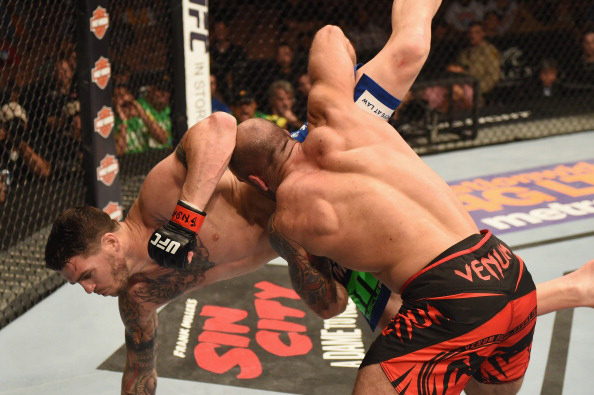 minutes of the fight, but in the final two, it was the Brazilian locking him up against the fence for the remainder of the round.

In the second, Santos landed some hard shots before taking Camozzi down in the midst of a standup exchange, and from there it turned into a typical Santos fight, as he dominated the action on the mat, with only a brief respite for Camozzi in the final minute when he stood for a second, only to be taken down once again.

Working his jab effectively for the opening two minutes of the final round, Camozzi unfortunately found himself grounded with three minutes remaining. The Coloradan tried to work for a kimura as Santos bulled him against the fence, and while that didn’t work, it did allow him to get to his feet. But when Camozzi got a little too aggressive with his striking, he got dumped to the mat by his opponent, who kept him there until the final horn.

Octagon newcomer Rob Font had a debut to remember, as he knocked out veteran George Roop in the first round of their bantamweight contest.

The first round had settled into a tactical rhythm, with Roop the more active of the two, but just when the fans were starting to get restless, Font exploded with an overhand right that caught Roop flush. The Arizona product stumbled and then fell to the mat face first, with referee Chris Tognoni stepping in at the 2:19 mark. 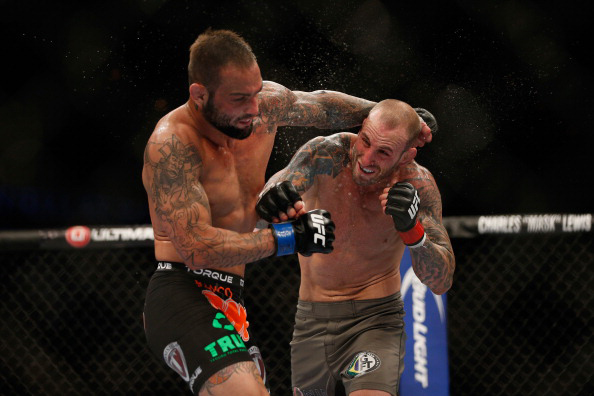 Zachrich took advantage of Vasconcelos’ sporadic offensive output in the opening round with a busy stand-up attack that kept the Brazilian from getting untracked.

Both fighters fought on even terms for much of the second frame, but a late surge by Zachrich might have earned the Ohio native another round.

Vasconcelos had a solid third round, but his lack of urgency in the all-striking contest wound up costing him in the end.

Former TUF 17 competitor Kevin Casey made a triumphant return to the Octagon, stopping Bubba Bush in the first round of the middleweight opener.

Casey got the fight where he wanted it to go almost immediately. But the fight’s move to the ground wasn’t due to a takedown, but courtesy of a short left to the jaw. From there, Casey calmly moved in for the finish, with a series of unanswered elbows knocking Bush out at 1:01 of the opening stanza.

With the win, Casey, who had won three straight after losing his UFC debut to Josh Samman in April of 2013, improves to 9-3; Bush falls to 8-3.