“The reason why I train and why I make sacrifices every day is to be the best in the world, and if I have this opportunity I would never miss it." - Georges St-Pierre 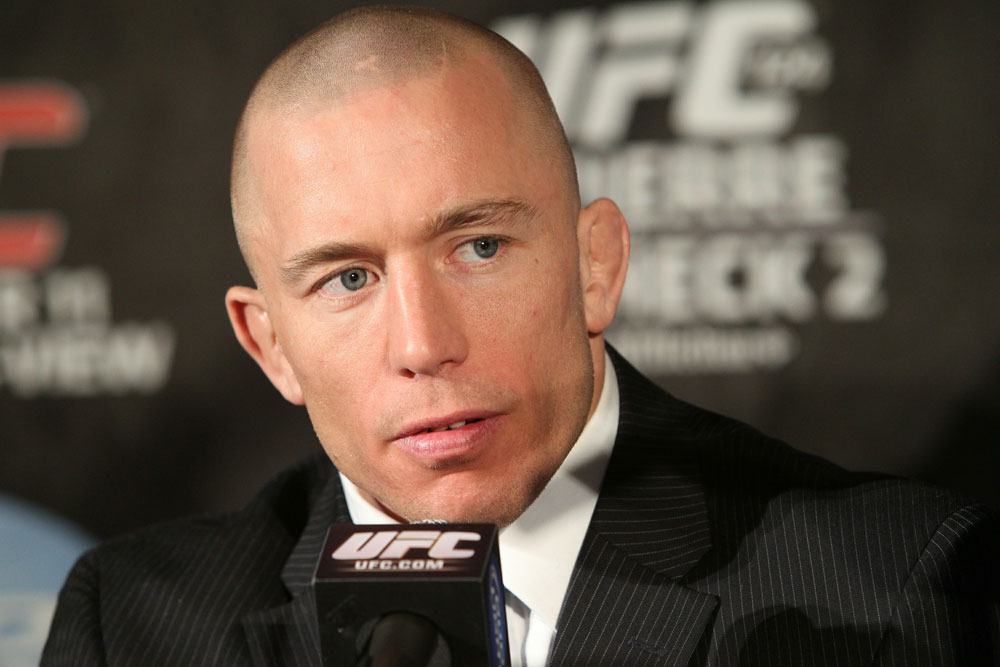 Always a master of the understatement, the unfailingly polite Georges St-Pierre one-upped himself when he summed up his Wednesday in Las Vegas with a simple “It’s been a very interesting day.”

The UFC welterweight champion chuckled when he said it, knowing that there were really no words to describe a day that began with him getting ready for a press conference to talk about his October 29th bout with Strikeforce welterweight champion Nick Diaz and ended with him now fighting Carlos Condit in the UFC 137 main event.

“I found out just before the press conference,” said St-Pierre of the switch in opponents. “Lorenzo (Fertitta) and Dana (White) said that to me and it was crazy. It sucked, but it is what it is. I’m a professional. For me, I don’t understand.”

What he (and the majority of the mixed martial arts world) didn’t understand was why Diaz would no-show press conferences in Toronto (Tuesday) and Las Vegas (Wednesday), miss three flights in the process, and then be unreachable by the UFC and even his own manager / trainer Cesar Gracie. Finally, White had enough and he pulled the plug on the bout, awarding the title shot to Condit.

“It surprised me a lot,” said St-Pierre of Diaz’ behavior. “The reason why I train and why I make sacrifices every day is to be the best in the world, and if I have this opportunity I would never miss it. I just don’t understand why he missed an opportunity like this.”

Condit, winner of four in a row, with his last three victories all earning post-fight bonuses, won’t let this chance pass him by though, and St-Pierre is no stranger to the former WEC champion known as “The Natural Born Killer.”

“All the time I kept my eyes on Carlos a little bit,” said the two-time welterweight champ from Montreal. “He’s a very good fighter, and now that it’s official that I’m gonna fight him, it’s gonna be a tough fight.”

The two also have a connection due to their work with trainer Greg Jackson and his Jackson’s MMA camp in Albuquerque. St-Pierre says the two never trained together in the gym, but that Jackson is opting to sit this October fight out.

“We never did work together, but we had the same training partners,” said St-Pierre. “Greg is gonna step away and he’s not gonna coach Carlos and he’s not going to coach me. But I’m not mad at Carlos – I think it’s the opportunity of a lifetime for him and I’m grateful that he took the opportunity and gave me a fight because I need the fight too. We’re both gonna go there and the best man will win.”

It’s the usual class you expect from St-Pierre, and he always delivers. Even in the midst of Wednesday’s crazy storm, he didn’t lose his cool. That’s what has kept him unbeaten since 2007 and what has made him the top welterweight in the world. But the 30-year old champion won’t take all the credit for it.

“It comes from the way I’ve been raised by my parents and years of training in traditional martial arts,” he said. That’s why my mentality is like that. It’s who I am, I’m a real guy, I don’t lie, and I do my thing. I’m surprised and I’m taken off-guard, but stuff like that happens in the business.”

And now it’s time for St-Pierre to get back to business, breaking down Condit and preparing for another big fight on the biggest stage in the sport. October 29th. That’s going to be the kind of interesting day GSP will look forward to.