Brown waiting until after Norfolk to figure out the future 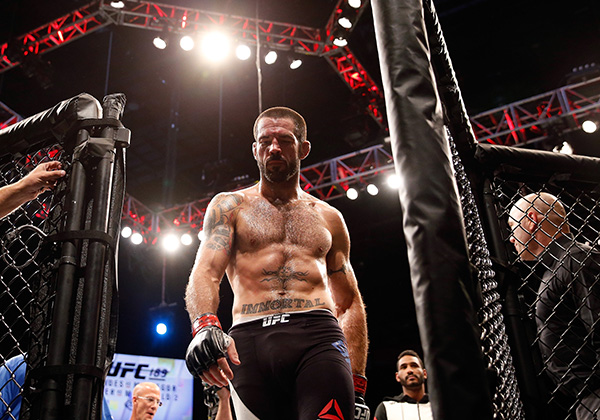 Matt Brown walks out of the Octagon after his welterweight fight during the UFC 189 event inside MGM Grand Garden Arena on July 11, 2015 in Las Vegas, NV. (Photo by Christian Petersen/Zuffa LLC)" align="center" /> As soon as Matt Brown announced in September that his Saturday bout with Diego Sanchez would be his last one, the tributes and kind words came pouring in for the veteran welterweight, an honest fighter who always showed up to scrap, win or lose. And he appreciated every tweet, message or story sent in his direction.

“It might have brought a little tear to my eye,” he said. “It might have watered me up a little bit, which is hard to do. It was a little bit emotional, but that’s why I disconnected myself away from that whole thought process. I’ve got a job to do on November 11th. And what happens after that is pretty much irrelevant right now. My life right now is about November 11th.” 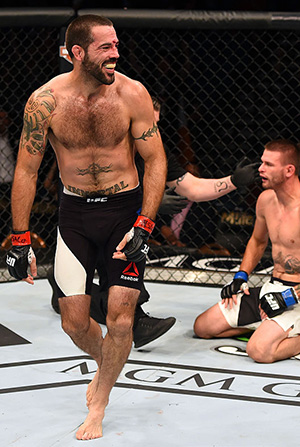 Tim Means in their welterweight fight during the UFC 189 event inside MGM Grand Garden Arena on July 11, 2015 in Las Vegas, Nevada. (Photo by Josh Hedges/Zuffa LLC)" align="left" />It’s the attitude the 36-year-old needed to have to prepare for Sanchez, because “The Immortal” has always been about taking care of business. But at the same time, he had to know that once the fight drew closer, the questions about retirement would be coming.

“I expected the question, but I can’t necessarily say I have a solid answer at this point,” he chuckled, clearly wanting those questions to go away because at this point, he has gone from full-on retirement to taking a wait and see approach. And in the meantime, a veteran fighter from Albuquerque is going to be trying to punch him in the face in a couple days. So for now, he’s holding off any concrete decisions until after the fight.

“To be honest, I’m not even thinking about it,” he said. “I’m thinking about November 11th right now and we’ll figure all that stuff out on November 12th and 13th and so on. For now, I got a hundred percent focus on the fight and we’ll worry about everything else later.”

I tell him I have one more question about it before we move on, and he graciously takes it. Like all fighters, you’re only as good as your last fight. Yes, Brown is coming off a loss to Donald Cerrone that puts him at 1-5 in his last six, but if he wins in spectacular fashion against Sanchez, won’t that entice him to stick around?

“You go in there and have a great performance and I know that’s the way I’m gonna feel,” he admits. “But feelings can lead to bad choices also. Right now, I feel amazing and I’m in the best place I’ve been in for a long time, mentally, physically and injury wise. I feel great, so I fully expect to go in there and put on an amazing performance and feel like I still have another 20 fights in me. That’s what I’m expecting to happen and that’s why I said I’ll think about what move is right logically, rather than based off the emotion of winning a fight. Because I’m gonna go win this fight and I’m gonna feel like fighting again. I know that for sure.”

Brown does sound fired up for this one, which may have to do with the style matchup or it could just be that he’s brought his old buddy – and fellow TUF veteran – Dorian Price into camp to work on his Muay Thai game, and it’s just like old times again.

“I love having him around,” Brown said. “Great guy, great energy and he’s a great coach with so much knowledge. That’s my theme for this camp, getting back to doing what I do. I feel like I kind of lost myself in the past few fights. I explored a lot of things and maybe altered the winning formula when I should have just stuck to what the winning formula was. So I’m going to get back to the basics, do what I do and go in there and have a great night.”

For over two years from 2012 to 2014, Brown was unstoppable, going 7-0 with six knockouts. Then things got shaky record wise. It’s key to point out that he was fighting killers like Robbie Lawler, Johny Hendricks, Demian Maia, Jake Ellenberger and Cerrone, but losses are losses, a harsh reality of the fight game. Looking back, Ohio’s Brown takes a more cerebral approach, realizing that there can be a silver lining in every setback, particularly in last December’s bout with “Cowboy.”

“I think there’s something good you can take from every fight, and every day in training and any time you challenge yourself, I think there’s good things you can take out of it and I think there’s a lot of good I can take out of that fight,” he said. “I’m really not even that disappointed in the fight. I knew I was good enough to win. I can look at the reality and I made one big mistake and that’s just the level that I’m fighting at. I understand that when I’m dealing with these guys that I’m fighting, all it takes is one mistake, especially when you make a big mistake like that. It’s the same when they’re fighting me. A guy makes one mistake, I capitalize on it and put him out right away. That’s the game we’re playing. So I don’t focus on the bad things that happened; I’m trying to pull all the positives from that fight and I’m not gonna let it happen again. That’s all I can do.”

And though the “R” word is hanging over Saturday’s bout, don’t think Brown has lost his love of the sport, or any combat sport for that matter. 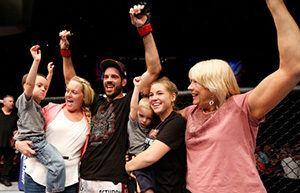 Erick Silva in their welterweight fight during the UFC Fight Night event at the U.S. Bank Arena on May 10, 2014 in Cincinnati, OH. (Photo by Josh Hedges/Zuffa LLC)" align="right" /> “I’m a combat sports fan,” he said. “Wrestling matches, jiu-jitsu matches, boxing matches, MMA, everything. I still get excited about it all the time. And if I were to pursue another combat sport, it would probably be Muay Thai before anything else. That was my real first love.”

Now it all comes clear. Brown fights Sanchez on Saturday, retires, and heads over to Thailand with Price to compete in Muay Thai and film their own reality show. Sound like a plan?