Brimage Bringing The Intensity to Atlanta Next Month

"Any time you see Marcus Brimage fight, you are going to see a high-intensity fight and, hopefully, it will end with a knockout." - Marcus Brimage 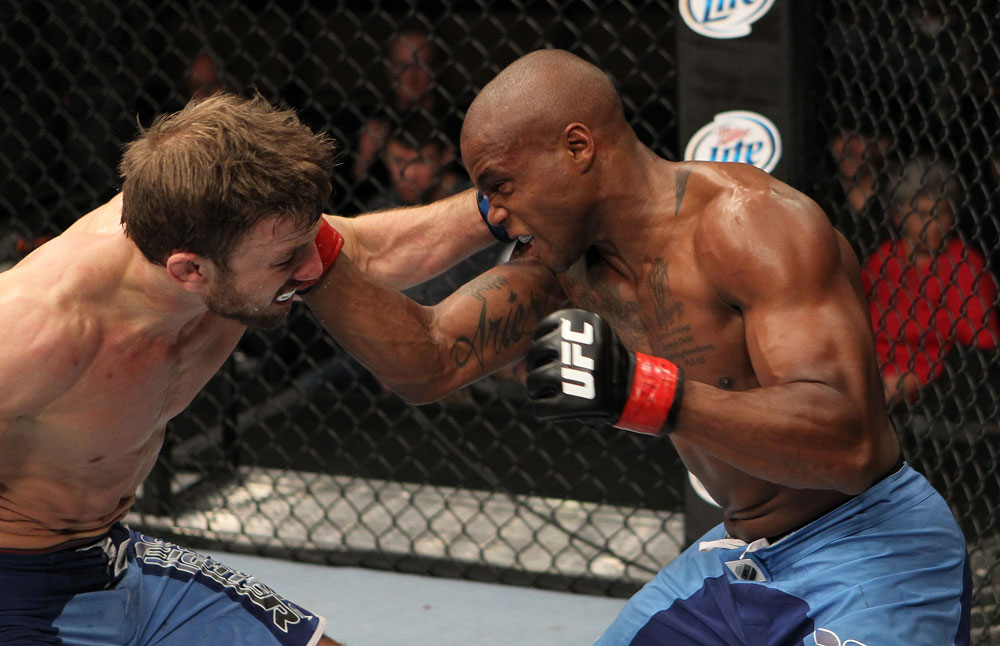 For the UFC Featherweights who will soon find themselves on the bad end of a continuous barrage of punches, kicks, and knees from Marcus “The Bama Beast” Brimage, please address all complaint letters to The Cartoon Network and show creator Akira Toriyama. Some credit should go to UFC light heavyweight Quinton “Rampage” Jackson for also inspiring him to start fighting and his first MMA coach, Chris Connelly, for teaching him how to fight. But still to this day, Brimage is picturing Piccolo tearing into Android 17 when he is throwing body blows inside the Octagon, which does little to comfort the opponents receiving them.

The 26-year old came to prominence last year over the course of three televised bouts inside a UFC cage. It all started with a second round TKO over Bryson Wailehua-Hansen, which gained Brimage entry into The Ultimate Fighter 14 house and, eventually, onto Team Bisping. The next was a disappointing second round sub loss to WEC veteran Bryan Caraway in the first fight of the show. Lastly, Brimage won when it mattered most in his UFC debut against castmate Stephen Bass at the TUF 14 Finale in December.

“It was my UFC debut, so my nerves were a little on edge,” reveals Brimage. “When I was on The Ultimate Fighter, I didn't get the chance to perform like I wanted to, so this was another opportunity to perform the way I should have performed. I didn't know about Stephen Bass' hands that much. I knew that he was an excellent jiu-jitsu practitioner. His wrestling takedowns weren't so good, but I was so surprised to hear that he was a Golden Gloves champion. I was like, 'Oh, it's going to be one of those fights.' I had my old coach Chris Connelly from Alabama in my corner as well as my brother and my strength and conditioning coach Tommy Elliot. It felt like home because I had them all behind me. Having them and their positivity around me helped my nerves before that fight.”

The battle with Bass was a whirlwind of fists, feet, and flying knees until the final bell, mostly highlighted by Brimage’s dynamic striking and Bass’ granite chin. “The whole gameplan was to stay in his face, hit him, work the body, work his head, and he just would not go down - he was like 'Rocky',” says Brimage, who earned a hard fought unanimous decision to improve his overall record to 4-1. “Also, I wanted to avoid his takedowns, so every time he pressed me I was ripping and moving. After that first round, I knew it wasn’t going to be one of those quick knockouts, collect your check, and go party. It's going to be one of those where I'm going to have to earn this one.”

At points, the action was almost anime-like, with the muscular Brimage tattooing Bass with a knee to Bass’ response of gritting his teeth and readying for another. “Actually, after that fight, I was thinking I'm not hitting hard enough,” tells Brimage, who looked to be hitting plenty hard, but nevertheless sought out a hyperbolic time chamber to reach that next level of power punching. “I found a boxing coach down here in South Florida at a gym called Riskus Boxing Club and I'm hitting about 35% harder. The next person I'm fighting against, Maximo Blanco, I hope his chin isn't as strong as Stephen Bass', but it doesn't matter because I'm now hitting harder than my last fight. Somebody's about to go to sleep.”

Brimage’s next 145-pound challenge will be on April 21st at UFC 145 in Atlanta, Georgia against Maximo Blanco. The well-traveled Venezuelan striker will be making his UFC debut in what should be a fan-friendly, frenzied, fist-fracas. At 8-3-1, 1 NC, Blanco was enjoying a six fight win streak running through competition in Japan until suffering a second round submission loss to Pat Healy in Strikeforce last September. Blanco should be a great test for Brimage, as he loves to trade, with seven of his eight wins coming by knockout. Plus, he’s never been knocked out.

“The way I was always brought up to fight, you fight anybody that they put in front of you - there’s no draft dodging here,” asserts the nine year member of the US Air National Guard. “After I said yes, I researched him and I was like, 'Wow, this dude is kind of a badass.' After watching his highlight reels, his Sengoku campaign, his fight with Pat Healy in Strikeforce, I was able to get me a game plan and I'm going to use that game plan when I fight. Maximo Blanco is a bad boy. Don't get that twisted. It is going to be a nice little fight. It's also the first fight. My fight is going to start off everything. I'm already saying that this fight is going to be 'Fight/Knockout of the Night'.”

Brimage has been busy training with his plethora of coaches from American Top Team in Florida, Chris Connelly from Spartan Fitness in Alabama, his strength & conditioning coach Tommy Elliott, and he has also been focusing on turning a weakness of his into a strength.

“I've been making sure that my wrestling defense is off the chain,” says Brimage, who has been getting a lot of ground game advice from a UFC vet because he believes Blanco and future opponents will shoot for a takedown after eating a few of his revamped punches. “Charles McCarthy has taken me under his wing and has been making sure my jiu-jitsu has gotten a lot better. It's pretty cool because I never thought I could be a jiu-jitsu guy, but now I've got a gi and I’m working hard on that.”

In 2011, Brimage made it into the TUF house, debuted with a win the UFC, and met his cagefighting hero “Rampage”, but there is something that eluded him last year, which he hopes to rectify in this one. “My second UFC pro fight and no sponsors yet,” remarks Brimage, who is specifically looking at the US military considering he’s enlisted, his brother is a graduate of the Naval Academy and being cross-trained to the Army, and his dad has been in the Army for almost three decades. “I saw the Air Force Reserve on Ryan Bader's butt when he was fighting Quinton Jackson. Who has been in the Air National Guard for nine years? This guy right here. Throw some of that sponsorship money this way.”

On April 21st at the Philips Arena in the ATL for UFC 145, “The Bama Beast” will be revved up on Senzu beans and looking to unload a kamehameha on Blanco.

“Any time you see Marcus Brimage fight, you are going to see a high-intensity fight and, hopefully, it will end with a knockout,” states Brimage, who is hitting harder and has more confidence in ground game that ever before, which should enable him to really lay into his strikes. If he KOs Blanco then he might go Super Saiyan from sheer excitement over the win and seeing a bonus check with his name on it.