Borg Returns To Reclaim His Place

“I’m considering this a fresh start and I’m personally okay starting from scratch,” Borg explained. “I think skill-wise, I’m a top 15 bantamweight. I’ve fought the best in the world."
By Damon Martin • Mar. 26, 2019

It has been 17 long months since Ray Borg last stepped foot inside the UFC Octagon, but that all changes on Saturday night in Philadelphia.

Borg makes his long-awaited return at UFC Fight Night: Barboza vs. Gaethje while also making a move to the bantamweight division after a long career spent competing at 125 pounds, where he was a former title challenger.

The last year and a half has been filled with a lot of turmoil in Borg’s life, primarily as he cared for his son Anthony, who underwent several surgeries to deal with a condition called hydrocephalus, which is an abnormal amount of fluid buildup in the brain.

Sometimes spending days or even weeks at the hospital made it nearly impossible for Borg to even contemplate fighting. Thankfully, his son battled through each and every surgery and Borg is happy to report that his little man is back to being a kid again.

“He’s doing fantastic,” Borg revealed. “He’s a wild little boy. He smiles and laughs all the time. It’s been very, very nice to see his condition really level out and really mellow out. With his condition, it’s all about meeting milestones and he’s met really close to all his milestones that he needs to meet to be on the safe route to not having any surgeries anymore.”

Borg always knew he was going to love being a father, but nothing could have prepared him for the kind of joy he felt seeing his son laughing, smiling and just playing with toys following his most recent brain surgery.

“Sometimes when you get advice, you take it but you don’t really know how good that advice is until you realize it and Demetrious Johnson told me after our fight ‘congratulations on being a father, it’s the best thing in the world’ and I’ll never forget that,” Borg said.

“He was not lying because it is the coolest thing in the world to see him playing with toys and not be in a hospital bed. Seeing him interact with little kids, it’s really been a blessing with his progress lately.”

With his son doing much better, Borg was able to turn his attention back to fighting, but with that also came several changes in his career.

When he was competing at 125 pounds, Borg endured a grueling process to make weight for every fight because he felt that was necessary to stay competitive with the best fighters in the world in the UFC.

It wasn’t until recently when Borg decided to test the waters at bantamweight instead, and he says the differences in his training camp have been nothing short of dramatic.

“Honestly, it’s been the least stressed I’ve been in a fight camp in a long time,” Borg said. “I’ve literally been able to just train and that’s it. At 125, I’d train all day, three or four sessions a day, and at the end of the day, I’d still have to sit in the sauna or go on a run just to shed those extra pounds.

“As far as training goes, it’s the least stressed I’ve been in my entire life.”

One of the fears that Borg initially had about moving up to a new weight class was giving up size and strength to bigger opponents, but at last one of those potential problems have been solved in his most recent training camp.

While he can’t do anything about being shorter than some of his future opponents, Borg has never felt more powerful than he has during preparation for his showdown against two-fight Contender Series veteran Casey Kenney this weekend.

Not only does Borg feel stronger than ever, but he’s absolutely convinced that this new-found power - combined with a serious gas tank at 135 pounds - should have every top-ranked bantamweight looking over their shoulder.

“I don’t want to get too high on myself, but I even told my coaches I think I’m going to like fighting at bantamweight because I am strong. I am very strong right now,” Borg stated. “Not just that, but I have the energy to maintain my strength.

If there was one hindrance to Borg moving up to a new division it would be his current standing at flyweight, where he’s still ranked as the No. 3 fighter in the world with a win over No. 1 ranked contender Jussier Formiga. 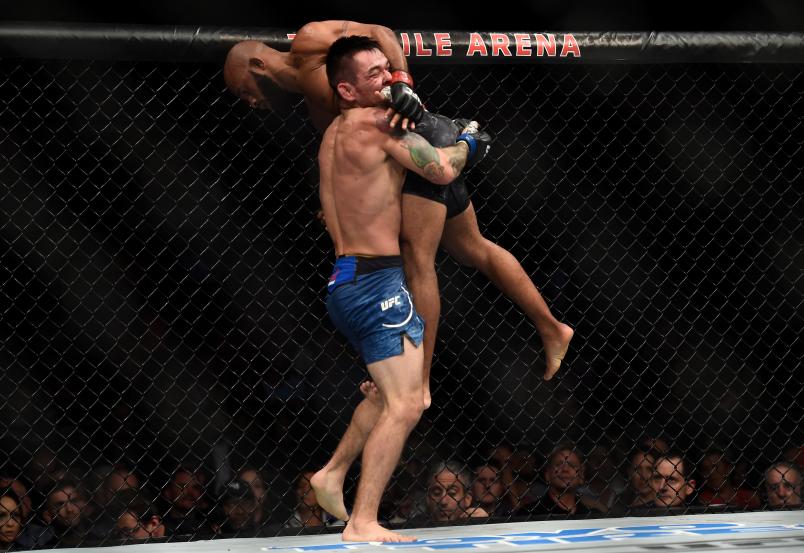 As proud as he’s been to earn his spot amongst the best fighters in the world at 125 pounds, Borg is more than confident that he can recreate that same kind of success in his new division.

In fact, Borg says the move to bantamweight has rejuvenated his enthusiasm because he’s really excited to work his way back up the ranks to prove himself again.

“I’m considering this a fresh start and I’m personally okay starting from scratch,” Borg explained. “I think skill-wise, I’m a top 15 bantamweight. I’ve fought the best in the world.

“I’m okay with the fresh start, climbing the rankings and being in the top 15 at the end of the year or early next year.”

Borg knows that nothing is gifted in the UFC just because he fought for a title in his last fight, which is exactly why he didn’t register a single complaint about facing an unranked opponent this weekend.

It didn’t really matter to Borg who stood across the Octagon from him because he plans on knocking them all down one by one until he’s secured his spot as one of the best bantamweights in the world.

“Just because I fought at 125 and my last fight was for the world title, I’m not one of these guys that feels entitled,” Borg said. “I’m not on Twitter arguing about fighting for the vacant title. I realize that with the shakiness I’ve had over the past year and a half that I have to earn my place again and I’m okay with that. I’ve had to earn everything my entire life.

“So if I have to earn my place again at 135 pounds, even if it’s as little as something getting on that scale and weighing in successfully, I’m more than happy to do that and reclaim my place in the UFC.”