Bonnar Rediscovers the Joy in Fighting

"The way to beat Anderson isn’t to be boring, it’s to get after it." - Stephan Bonnar 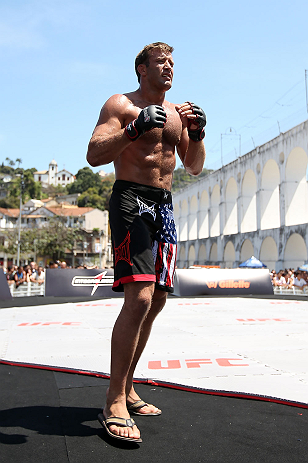 When Stephan Bonnar began his UFC career back in 2005, he was more incredulous than ambitious.

“I really didn’t think about going for a title, it was more like, ‘wow, I’m actually doing this for a living now? Are you kidding me? I get to quit my day job and just train and fight now? Oh well, I’ll give it a try,’” he chuckles as he remembers.

Bonnar’s mindset and gratitude didn’t change as he built a successful career. This past year he was able to end his career on his terms, with a win streak and having fought the best fighters in the world time and time again.

“I should have probably lied and said that I wanted the belt, but I never cared too much about it the way some guys do, like Chael Sonnen, where they feel they are failures unless they become champion,” he says.

Bonnar continues to take it one fight at a time as steps out of retirement and into the Octagon Saturday with the world’s best fighter, Anderson Silva, in the Brazilian’s home country at UFC 153. When the event was thrown into disarray after injuries to fighters canceled the main and co-main events, Silva offered himself up to save the event.

“The Spider” was not in fighting shape and so would fight at a weight class higher than he usually does. Fight fans and fighters alike know that a light heavyweight Silva may be just as dangerous as the middleweight one, considering that his two forays into the 205-pound division resulted in two quick and brutal knockouts.

Silva needed someone to step up to fight him in order for UFC 153 to be saved, however. Bonnar answered the call with three weeks of actual training time left before the October 13th event.

Facing Anderson with full camp is daunting enough; doing so effectively on short notice seems almost insurmountable. Bonnar compares the work he’s done with conditioning, skill sharpening and strategy to prepare for Silva to studying for a big exam.

“You try to do a little bit of everything,” he explains. “It’s like cramming for a final in college. You’ve just got to hammer it home as much as you can. I train in the mornings and evenings, nap in between, and at night I ice everything, put his fights in and watch them to find weaknesses and holes. It is not easy with a guy like Anderson. He’s a complete fighter.”

There are positives to fighting the best fighter in the world for Bonnar, though. As a huge underdog (some betting lines opened with Silva as a 13:1 favorite) Stephan says he feels liberated. “It takes a lot of the pressure off. People don’t expect you to win,” he explains.
“I love being the underdog. I’m eating it up.”

Bonnar knows perfectly well what a win over Silva could mean. He could either go back into an official retirement, having earned perhaps the biggest upset in MMA history and become a legend, or he could parlay that win into even bigger paydays and matchups.

He says that only this type of opportunity could have lured him out of retirement, where he was happy doing television broadcasting, partnering in businesses and spending time with his expecting wife. “I was pretty fine with having hung it up,” the light heavyweight admits.

“I tried to get the big fights. I lobbied to get a job coaching The Ultimate Fighter with Forrest [Griffin]. I thought that would be a great final hurrah – bringing it full circle to the show and get a win over him. Dana [White] didn’t go for it, so I took it as God’s way of telling me to move on.

“I didn’t just want to continue to fight the best guys in the world before they had the recognition of being the best guys. I’d done that too much. So I was done. It was no big deal, I was cool with that. After eleven years fighting I had a lot of miles on my body and it needed a break from it anyway.”

When he got the offer to fight Silva, Bonnar was happy that his body had, in fact, healed up a great deal since fighting last November. As far as his Zen mindset in retirement, Bonnar says that fans shouldn’t worry about him not snapping back into fight mode at UFC 153.

“When you are fighting the best pound for pound guy on the planet with three weeks of training it lights a hell of a big fire under your ass,” he assures.

That fire has been driving Bonnar in training, but he admits that he won’t know for certain if he’s been able to get himself in good enough shape to fight at the type of pace he always has. “I don’t even know if I can be in good enough shape to fight the way I normally do – being an aggressive fighter who doesn’t waste time in there. We’ll find out on fight night,” he says.

Despite that uncertainty, “The American Psycho” does not plan on biding his time and taking it slow against Anderson. “I’ve never really gone in there and stalled, looked for stand ups, held on. I go in there to fight. I don’t know if I can go in there and slow it down,” he says.

“Especially with a guy like Anderson who is so fast. What, am I going to let him get into a rhythm and pick me apart from the outside? Not a good idea.”

Make no mistake though, Bonnar’s number one goal is shocking the world and beating Silva on Saturday. He just believes that the winning strategy will also be an exciting one.

“I’ve got to take some of that power away [from him]. I can’t let him get his rhythm and confidence by picking me apart and countering me. I’ve got to mix it up and pressure him. Yeah, the way to beat Anderson isn’t to be boring, it’s to get after it.”