With blueprint in hand, Sterling ready to perform

“I look at it as performance,” he said. “I study how guys before me succeeded and how guys are currently succeeding and I use that as a blueprint for how I can succeed, whether that’s in the ring or on the microphone or on social media. Ultimately, I know that if I go in there against Bryan Caraway and crush him in a way no one else has before me and then dazzle the post-fight interview, I’ll end up with the next title shot.”

He’s called the “Funk Master” for a reason, and he will put all his skills to the test against Caraway this Sunday in the featured bout on the UFC FIGHT PASS early prelims in Las Vegas.

“I’ve been training since January, and I thought I would be fighting a lot sooner so I had to taper it off a little bit and then pick it back up to make sure I peak at the right time,” he said. “There are multiple factors and reasons why I wanted this fight with Caraway, mainly because of the stylistic matchup and the challenges he poses to me. It’s that grappler vs grappler thing. He has gone on the record saying he’s the best grappler in the division. I like to differ on that. He does have name recognition because he’s Miesha Tate’s boyfriend, but he’s also done a lot of stupid things in the past and people want to see him get punched in the face. I will be the guy to do it.”

Caraway has perhaps been the butt of too many jokes, and no matter how easy it is for Sterling to take those pot shots, he chooses to tone it down a bit. He’s far too original to continue a mantra that’s been going on since the Tate-Ronda Rousey rivalry that started in 2012 when Rousey beat Tate to take the Strikeforce belt.

“He’s whatever, it’s really about competition,” Sterling says. “I can’t look past this guy. He’s won twenty fights for a reason. He’s ranked in the top 10 in the world for a reason and I definitely have to respect that. That being said, I don’t know how as a man - after being called out so many times – doesn’t give a response or a rebuttal. He’s made a good career out of riding on his girlfriend’s coattails and hiding behind her at the same time. Fighters fight. If someone calls you out, show who you are. Let’s fight. Don’t hide.”

And while it sounds like Sterling is out to pick a fight, don’t think he’s one iota emotional about this one.

“I like to feel out my opponent, so I usually get off to a slow start. That’s just the way I approach the game,” he said. “It’s hard to judge a fighter on just their last fight. That has nothing to do with how they’re coming in to this fight. I like to get an idea of what they might do. Some people stick to what they normally do, but others work their whole camp on just one technique that’s new. I will just take this fight wherever it goes and win the exchanges.” 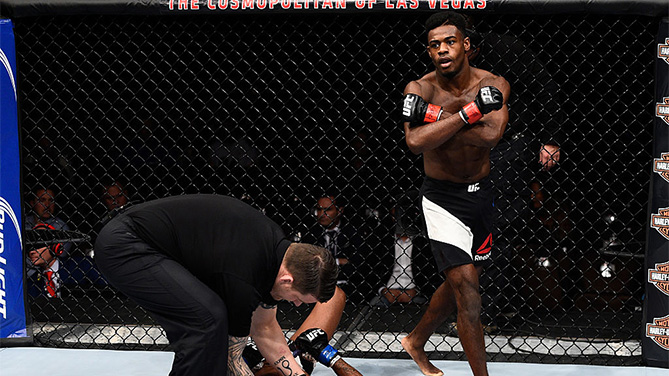 It is a grappler’s dream fight. Caraway is, in fact, one of the best grapplers in the division, even if he says so, with slick transitions and 16 submission wins. Sterling has six submissions and 12 UFC takedowns to Caraway’s 15, but fight math is not anything Sterling puts too much weight in.

“This fight will end up on the ground when I say so and I think it will make the difference in the fight,” he said. “I think he’s going to come in here thinking that I’m going to grapple with him. I’m here for an MMA fight. I’m going to win those grappling exchanges and I will show why I feel I’m one of the elite grapplers in the division.”

Sterling -- one of the more entertaining personalities in the UFC -- didn’t have any role models growing up. There weren’t many teachers or coaches in his life who encouraged him to take the path in life that has led him to a career with the biggest fight promoters in the world, fighting on a national stage. For him, it was organic. Some say mixed martial arts is the first sport to grow out of the Internet age, and for Sterling, he said his personality and his confidence grew out of an MMA age.

“It wasn’t until I was an adult and I started doing MMA and people started to say I was a good fighter and I started to believe in myself,” he says. “You could say my personality comes out of MMA and being a fighter. I like to have fun and I like to perform, whether I’m fighting or rapping or goofing around on the microphone. My motivation is thinking of my future. The best way to put it is I used to be like ‘They don’t want to see us win.’ But now that I’m more mature and having gone through college and my amateur career and now as a professional fighter, I see now that the route I was going in my life was not the right one. Luckily, I was able to turn my attitude around and not take anything for granted. That’s my motivation. I want to make something great out of my life.”