The Blueprint - Bisping vs. Miller 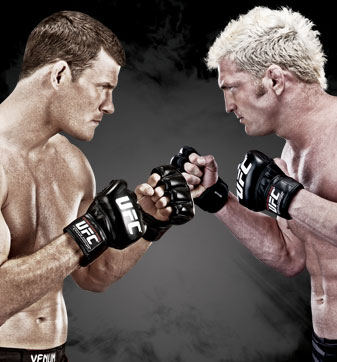 Not to beat a dead horse, but this Saturday’s Ultimate Fighter 14 finale main event between coaches Michael Bisping and Jason “Mayhem” Miller, just like many others, is about one man keeping it on the feet and the other taking it to the ground.  Brilliant, I know.  But that is the reality for most fights, particularly when one man has a significant edge on the feet and the other on the ground.

That is absolutely the case with Bisping versus Miller.  Bisping is in a different league on the feet. “The Count” is a skilled kickboxer, though certainly not an overly heavy-handed one. He isn’t going to knock out Miller with a single strike thrown early in the bout, principally because he is a stick-and-move combatant, rather than one who sits down and swings for the fences.

Miller is a decent striker for mixed martial arts, but the reality is that Bisping defeats him in a kickboxing bout 19 out of 20 times. Miller’s only chance on the feet is pull out a winning lottery ticket with a punch, elbow, kick or knee that opens a fight-ending cut or that is a perfectly executed one that Bisping doesn’t see and lands in just the right spot. I’m not saying that it is impossible for Miller to score a knockout on the feet.  If I’ve learned anything over the last 18 years of watching the UFC, it is that anything can happen in any fight.  It is just highly unlikely, and he would not be well served trying to prove me wrong.

“Mayhem” instead wants to get the fight to the ground immediately and keep it there. The submission game and general grappling is where Miller is at his best. The majority of his finishes are by submission, and a good chunk of his technical knockouts came by way of ground and pound. But that doesn’t tell the whole story. Talk to anyone who has rolled with Miller at some point in the last decade. Odds are even better that those who have rolled with him will rave about his ground prowess.

Of course, Bisping is no slouch on the ground, not by a long shot. In fact, he enjoyed some success in UK grappling tournaments, and I think it is fair to say that he has one of the more underrated guards in division. But he is no “Mayhem” Miller. Again, not by a long shot.

All that raises two obvious questions. Let’s deal with the tougher one first. How does Miller get the fight to the ground?

Honestly, I’m not sure. Conventional wisdom suggests that he should come out swinging in an attempt to convince Bisping to forget his sprawl and focus on dropping bombs.  At that point, he can change levels and explode for a takedown.

I’m not sure that will work for a couple of reasons. First and foremost, Miller doesn’t have great takedowns, and Bisping has excellent takedown defense. That isn’t such a big deal, if he can really get “The Count” to throw his weight down and forward in order to truly load up on his shots. If that happens and Miller dips under a big right hand, then even first-grade wrestling is probably enough to score a takedown.

The problem, however, is that Miller will have to stand and trade with Bisping for quite awhile in order to convince him that the game plan is to brawl.  During that time, Bisping will score a lot of points with his excellent jab and crisp one-twos. When Miller leads with shots of his own, Bisping will slice through his standup attack with precise counters.

Thus, Miller should really try to avoid exchanges altogether. The better approach is to attack aggressively with his hands up and look to initiate a clinch, rather than punching away.

Bisping is excellent at defending takedowns, but I think that he is more exposed to takedowns from the clinch because he tries to pull straight out, which opens the door for trips and Greco-Roman throws.  That isn’t necessarily Miller’s forte for taking the fight to the ground, but he is a strong, athletic middleweight who has always had a knack for getting opponents to the mat, often with unconventional methods. Big shock for a guy called “Mayhem.”

If the fight goes to the floor, my guess is that Miller will really focus on softening up Bisping with ground and pound, rather than quickly working for slick submissions.  He will want to sap some of his strength and cardio with heavy hips, forcing Bisping to really carry his weight and defend on the ground, which will start to take away from the Brit’s standup later in the fight. Whatever the case, as soon as Bisping finds himself on the ground, he should quickly get his heels on Miller’s hips and explode to create room to pop back up on his feet.

Miller, of course, will want to prevent that from happening by keeping his hips down with a wide base.  That will help him control his opponent on the canvas.  He should slowly work his ground and pound while forcing Bisping to the cage, where he can smother him against the fence, effectively stifling Bisping's jiu-jitsu.  The downside is that Bisping will be able to use the fence to stand up if Miller gives him any room to breathe whatsoever.

If Bisping makes any mistakes trying to work to his feet or if he allows Miller to pass into side control and tries to roll out, Miller will not hesitate to snake around to his back and look for a fight-ending rear naked choke.  I think that is a very real possibility.

Another very real possibility is that Bisping leaves an arm unattended while defending Miller’s surprisingly effective ground and pound. That can easily lead to an armbar or arm triangle. I think one of those three submissions—rear naked choke, armbar or arm triangle – are the most likely methods of victory for Miller.

Of course, all that assumes that Miller is successful taking down Bisping.  I’m not certain that will happen.  As mentioned, the Brit has excellent takedown defense.  That was obvious in his fights with Rashad Evans and Matt Hamill, both of whom are far better wrestlers than Miller.  Bisping is good at sprawling, and he is excellent at avoiding clinches along the fence.  More importantly, though, he typically employs a stick-and-move strategy against ground fighters, rather than stalking like an apex predator.

Bisping is very skilled at fighting behind an active jab while circling to his left.  In my opinion, that is when he is the most effective, despite the fact that it was his major mistake in his first knockout loss.  In that fight, he was facing Dan Henderson, who happens to have a dynamite-filled right hand, so circling to his left meant that he was walking right into the weapon he so desperately wanted to avoid.

Miller doesn’t have a dynamite-filled right hand, so Bisping shouldn’t worry about jabbing and circling to his left.  Circling will make it difficult for Miller to square up to Bisping and either shoot for a takedown or lockup a clinch.

Keep in mind that sticking and moving doesn’t mean pity pat strikes.  Bisping throws most of his shots, including his jab, with conviction.  That is obvious by the fact that 14 of his 22 wins came by way of knockout or technical knockout.  Nevertheless, he is not a come-forward-at-all-costs apex predator with a granite chin and bazookas for fists, ala Hendo.  He instead needs to set up his strikes with angles and chip away at his opponent until his foe is dazed, at which point Bisping can throw caution to the wind and open up full throttle.

All that is a long way of saying that if the fight remains on the feet, Bisping will be the one leaving with his hand raised.  If Miller is able to score multiple takedowns and keep the fight on the ground for any period of time, he will likely pull off what most will view as a significant upset.

Either way, this should be a very entertaining fight.