Nobody who has ever fought in the UFC can claim the accolades BJ Penn can.

Penn shot immediately to the top of the pile when he took on Jens Pulver for the lightweight strap at UFC 35. After losing a close decision, Penn hung around until he grew bored of the lightweight division. Despite having success in the division, still with only one loss on his record, Penn threw himself into the welterweight shark tank and beat Matt Hughes for the 170-pound belt.

Anybody who knows anything about aging and cutting weight knows, once you go up a weight class, you’re probably not coming back down. 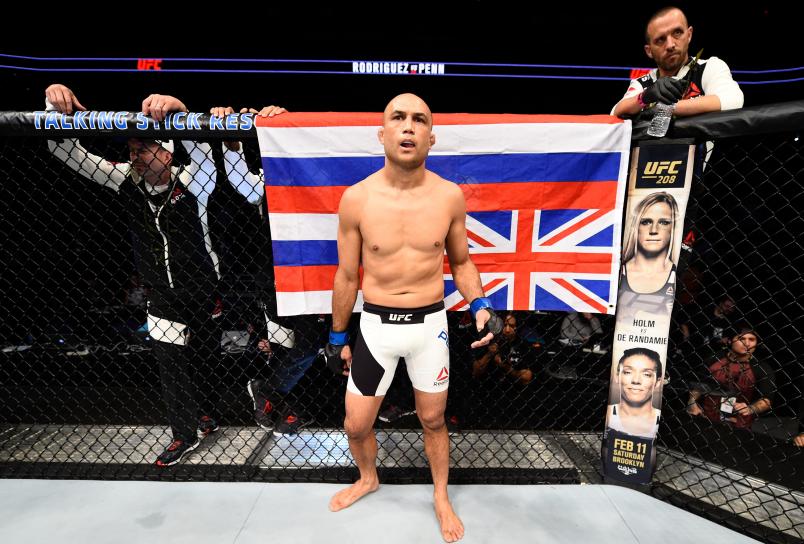 BJ Penn enters the Octagon before facing Yair Rodriguez of Mexico in their featherweight bout during the UFC Fight Night event inside Talking Stick Resort Arena on January 15, 2017 in Phoenix, Arizona. (Photo by Jeff Bottari/Zuffa LLC/Zuffa LLC via Getty

Penn immediately stepped up to middleweight after a subsequent departure from the UFC. Still not satisfied, for Penn’s next fight against the 225-pound Lyoto Machida, he weighed in at 191 pounds.

The man who fought for the lightweight title only three years prior was now flirting with the heavyweight division. Coming back down would be nearly impossible at this point, right?

It was only two years later that BJ Penn was fighting Jens Pulver again.

Every fight fan under the sun was ready to tell each other they weren’t surprised he couldn’t come back down to 155, but “The Prodigy” made it happen. Penn would go on to defeat Pulver and put himself in a title fight against Joe “Daddy” Stevenson and would walk away the 155-pound champ.

He didn’t make it easy on himself with previous weight fluctuations but that didn’t stop him from going up to welterweight again almost immediately. Attempting to become the first simultaneous champ-champ, Penn took on Georges St-Pierre at 170 pounds and fell short. When he returned to lightweight, Penn defended his title twice before involving himself in one of the greatest rivalries in MMA history against Frankie Edgar.

Edgar ended Penn’s title run and put it to bed for good in the rematch. Frustrated with the lightweight division and the losses adding up, BJ Penn AGAIN moved up to welterweight. By the time he was 31 years old, he had already fought in four different weight classes. 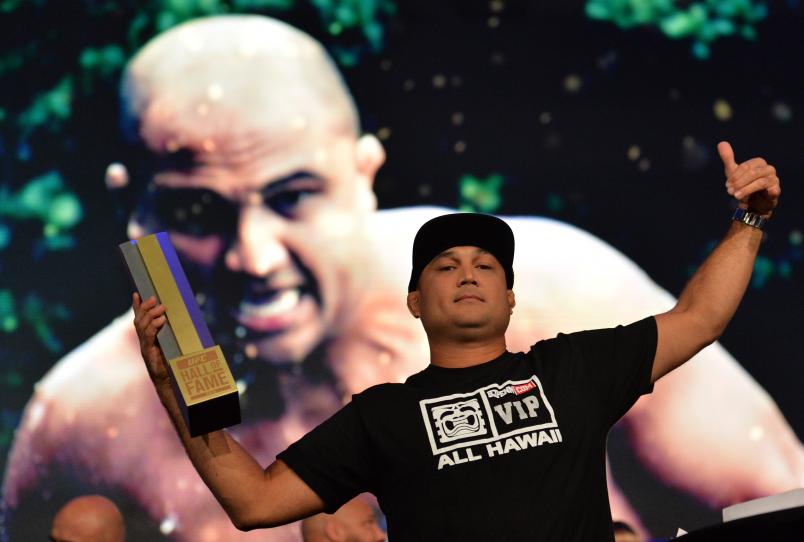 BJ Penn receives his award as he is inducted into the UFC Hall of Fame at the UFC Fan Expo in the Sands Expo and Convention Center on July 11, 2015 in Las Vegas Nevada. (Photo by Brandon Magnus/Zuffa LLC/Zuffa LLC via Getty Images)

Penn knocked out Matt Hughes, winning their classic trilogy, and fought at 170 three more times. The story should have ended here, but this is BJ Penn we’re talking about.

After spending his whole career fighting between 155-191 pounds, 35-year-old BJ Penn announced he was moving down to featherweight to fight Frankie Edgar. Not only did Penn make weight, he weighed in a half a pound less than Edgar. Penn would stick around for two fights following his trilogy bout with Edgar before finishing his career out at lightweight.

For the fans who came in during the McGregor era it’s truly unfortunate that one of MMA’s most fascinating careers was missed. It’s nothing to see that a fighter going against Frankie Edgar weighs 145 pounds, but for a man who fought in the light heavyweight division and had some of the most decorated runs in much higher weight classes, the only thing they can do is take our word for it.

BJ Penn fought 27 times in the UFC Octagon, won titles in two different weight classes, created some of the greatest rivalries and Octagon moments in the history of the UFC and never once missed weight.