The Best Mouthpiece in the HW Division 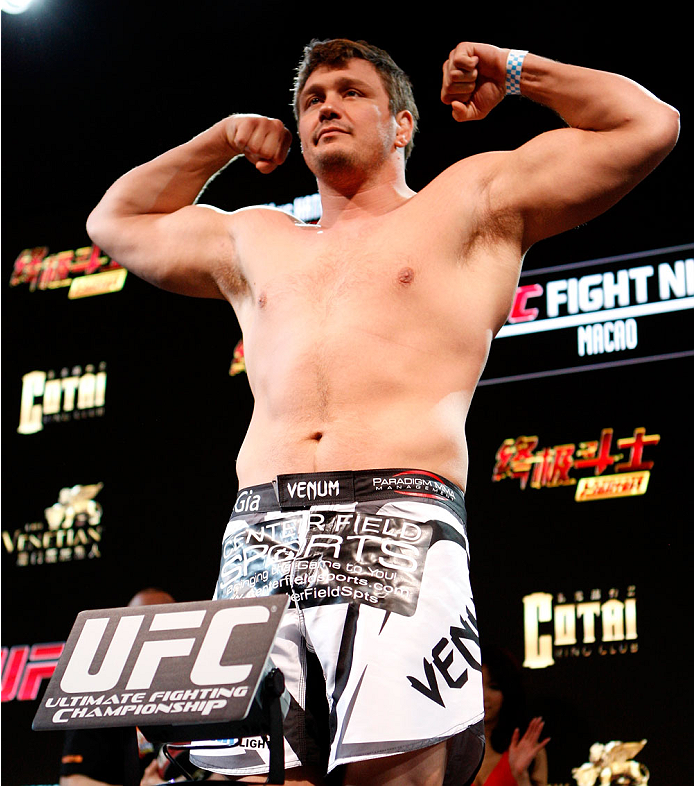 After some high profile wins in the UFC, 35-year-old Matt Mitrione faces one of the biggest fights of his career against Stefan Struve, who is making his Octagon return after a heart condition sidelined the Netherlands native for nearly a year.

The two heavyweights will collide at UFC 175: Weidman vs Machida at the Mandalay Bay Events Center in Las Vegas, Nevada on Saturday, July 5th.

“July 4th weekend is always a great fight card, like New Year’s Eve,” says Mitrione. “I’m excited for a lot of reasons. It’s the first time I’m going to be fighting on the same card as Urijah Faber, and I’m cool with all of the Alpha Male guys. Plus, there are two title fights after my fight with Stefan so this could be one of the best cards ever, and then you’ve got the Frankie Edgar and BJ Penn card on Sunday and my teammate Guto Inocente is fighting on that card so I am looking forward to that as well.”

Mitrione’s career in the UFC has been impressive, particularly for someone who came late to MMA and has spent his entire professional fighting career in the world’s most prestigious and most competitive promotion since competing on the tenth season of The Ultimate Fighter television show five years ago.

“I have a pretty good mouthpiece and I caused a stir on TUF,” he said, “And I think people are curious to see how I turn out as a fighter, and also, the UFC gave me fights that I could handle for someone who started their professional career and has fought exclusively in the UFC. I wasn’t ready for any mid-tier guys when I got off the show and I was lucky enough that I didn’t get thrown in there with someone who had way much more experience than me.”

The former NFL lineman and Purdue University All-American broke a three fight losing streak with a TKO victory against Shawn Jordan earlier this year, which earned him his first Performance of the Night bonus. It’s also the first fight that “Meathead” says he realized he’s turned a corner in terms of state of mind once the cage door is closed.

“My fight against Shawn Jordan was the tenth fight I’ve had in the UFC, but it’s the first time that during a fight, I didn’t get a dreamy, surreal feeling,” he said. “I feel like that was a turning point for me where I didn’t have a moment where I thought to myself, ‘Wow I’m really in a fight right now.’ It’s hard for me to explain the feeling. I wouldn’t call it daydreaming because I’m coherent, and it doesn’t happen from any punch or anything like that. It’s just a surreal feeling where I can almost see myself in the fight. All I do know is that it didn’t happen in my last fight and I think that means I am finally used to fights. I was in control the entire time and I’m excited to get in there and see what happens against Struve.”

Stefan “Skyscraper” Struve has been battle-tested more than anyone in the heavyweight division except for perhaps Roy Nelson and Junior Dos Santos. His last fight saw his jaw grotesquely out of place after a Mark Hunt right, and some months later a leaking valve in his heart put his UFC career in jeopardy.

But don’t tell Mitrione he’s facing a fighter who might be a little lesser of the man he usually is inside the Octagon.

“I like Struve,” he said. “He’s a good dude and I’ve hung out with him on a social level. I feel for his health for what the situation was, but he’s got a clean bill of health. His jaw is healed, his heart is healed, he’s gone through a full camp and I’m sure the doctors gave him many stress tests, so I have no problems punching him in the face and dropping hands on him. I’m glad he’s 100 percent because I don’t want to fight a piece of Stefan Struve; I want to fight all of Stefan Struve. If he didn’t feel he could do that he wouldn’t have signed back up.”

And while Struve may be at 100 percent again, the wily veteran will most likely opt to take this fight to the ground, where his 7-foot frame and long limbs make him a dangerous submission artist.

“I think we know what Struve can do,” he said. “I got caught in a D’Arce against Brendan Schaub, and it’s the first time I got caught in an arm choke, and unfortunately I didn’t prepare enough for that kind of move, so in this fight I’m prepared for it. We feel that we know what Struve will do. We saw him go for a D’Arce off the wall when someone shot for a double on him, so he’s pretty unique and his length provides a couple of new challenges and that’s exciting for us. I am fortunate enough to have a couple of training partners who are 6’8” and 6’9” that are very legitimate grapplers down here in Florida and they specialize in triangles, armbars and arm-in chokes so I’ve been facing it quite a bit, and I’ve been seeing what I expect to see.”

Matt will turn 36 in mid-July, and as most fighters his age will tell you, that’s the age when athletes begin feeling the wear and tear they’ve put their bodies through since adolescence.

“You have to listen to your body when you get older as an athlete,” he said. “You cannot train like you’re 22 anymore, so when your body says it’s tired you have to be tired, even if your head is saying you’re not. The pains become more and more and they take longer to go away, so when you get older you have to be smarter about training than you were when you were younger. In football they say ten-thousand mental reps make a habit and one-thousand physical reps make a habit, so by the time you’re my age you better have your reps in because you’re going to need those habits when the time comes to perform. You really have to be a student again to let your body rest, and let your mind study techniques so that it can help your body along when the time comes to do it.”

Another aspect of age is the balancing act between training, business opportunities and being a family man.

“It’s hard, to be honest, he says thoughtfully. “I get torn in a lot of directions and I was raised Catholic so I have a constant guilty conscience. I feel that everything I do, I do for my babies to give them a better life, and they’re growing up with me having to leave for camp, but it is like a ‘woe is me’ type thing. My wife Tina and the kids handle it well. We bought the house next to her father’s and we cut a hole in the fence so the kids can run back and forth all day and their cousins live two minutes away but it is more stressful on me. It’s hard living vicariously through a camera.”

For someone called “Meathead,” Mitrione is anything but the stereotypical dumb jock. He’s cerebral when he speaks, he’s the CEO of a clothing company, and he gets the media game better than most, as proven by his post-fight interviews with Joe Rogan and the time he spent on TUF.

But the big man says don’t let the nickname fool you.

“I don’t go by Meathead, I just get called Meathead,” he said. “I’ve been called Meat forever, since I’ve been 13 years old. It’s not my name of choice, but it’s who I am now. I’m not dumb, I’m probably too intelligent for my own good, but I still do the same dumb things 15 times and I never learn. I’m not special because I happen to have a job that has a lot of attention on it. I’m just a regular person like anyone else.”