Behind The Night: Diaz vs Cyborg

You don’t exactly have to squint with one eye and close the other to see the Diaz Brothers pushing the limits but don’t always believe the hype.

After fighting for close to every major promotion under the sun, Nick Diaz came to Strikeforce and did what he does best. Talk trash, win fights, put on a show. In January of 2010 Diaz won the Strikeforce welterweight title against Marius Zaromskis. In under a round, Nick Diaz proved he was the gold standard in the division and went on to defend the title and then meeting Evangelista “Cyborg” Santos for the title.

Santos was hungry to establish himself as the top of the division and also become the most dangerous couple in MMA with then wife, Cristiane Justino, better known as Cris Cyborg. Cris was currently 10-1 (1) with the Strikeforce women’s featherweight title. 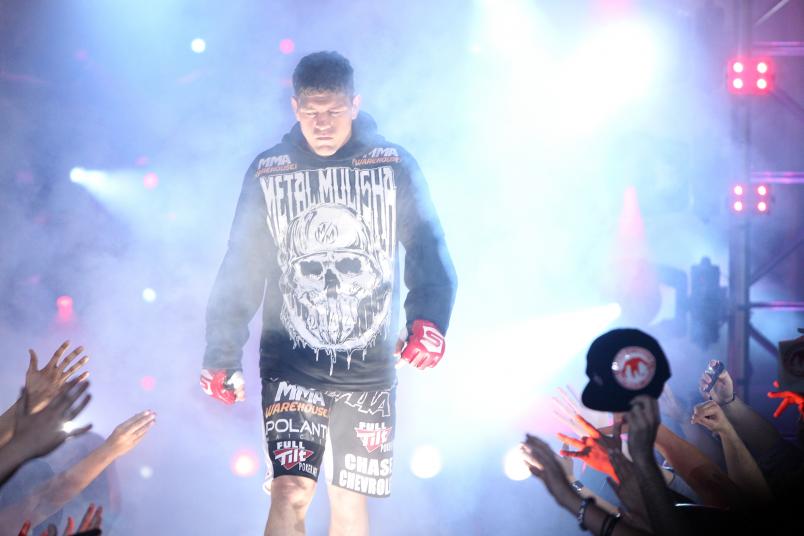 Cris sat cage side as Santos put on a “Stopping A Diaz For Dummies” clinic with repeated, heavy shots to the front leg that went completely unanswered in the beginning of the first round. Wear down the lead leg, nullify the boxing and avoid the ground game. Easy enough, right?

Just when Diaz’s poker face could no longer cover the pain of the flush leg kicks, Diaz opened fire. Making contact and backing Santos up, Diaz landed a flush left hand that rocked Santos against the cage. Diaz blew the doors off with an almost endless combo and continued connecting until the first round came to a close. Santos likely took the first round, but the tide had shifted dramatically.

Between rounds, the camera showed a concerned Cris Cyborg outside of the cage. The face that was once intense was now looking on cautiously optimistic.

Round two opened up with Diaz eating more leg damage before quickly turning back into the slugfest the fans paid to see. The needle was tipping Diaz’s way when Santos made the mistake of taking Diaz down with thirty seconds left in the round. The takedown would be the beginning of the end as Diaz went from flat on his back to winning by armbar in under 20 seconds.

After the fight, the broadcast shows Diaz walk over to the cage climb up and lay down some of his patented trash talk on somebody outside of the cage. The verbal action heated up when Diaz threw his mouthpiece at the person, visibly yelled “F*** you!” and had to be restrained by his coach before getting showered with a drink thrown from outside the cage. 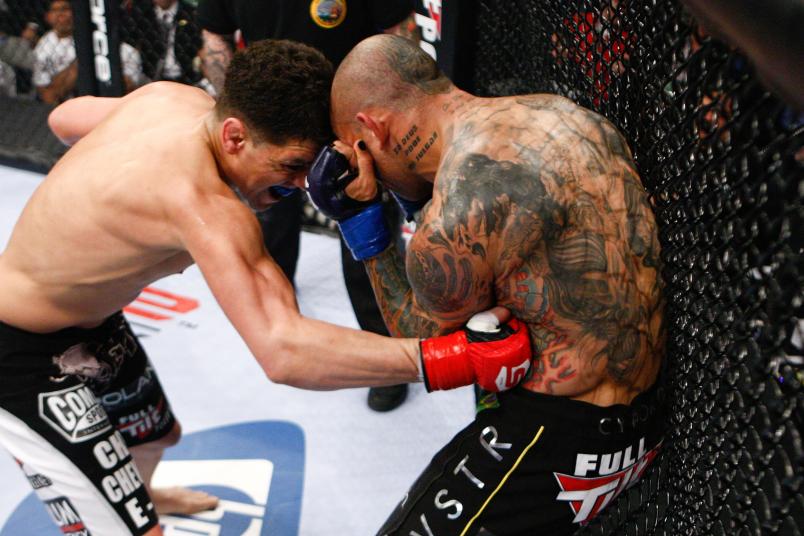 One of the next shots was of Cris Cyborg in tears, being consoled and calmed down and the camera being shooed away by her entourage.

The camera returned to Diaz who returned to offer piece of his mind. The cameras caught a very indisputable, “f*** you, b****!”

Diaz submitted a man who had only been submitted once before and defended his title for a third time but the message boards buzz was all focused on Nick Diaz clearly cursing out Cris Cyborg after defeating her husband.

Former Strikeforce matchmaker and current Invicta FC President, Shannon Knapp says that while it’s not hard to portray Nick Diaz as a man who would disrespect a crying wife after putting a beating on her husband, it’s a narrative that needs revisions.

“I can sort of set the story straight,” Knapp said. “I didn’t realize at the time that it was being portrayed in a different way. I guess when you go back and look at the highlights and stuff and when they would show him talking and stuff they would also show female Cyborg so it looked like he was talking to her but that was not true.”

Diaz never said a word to Cris Cyborg or any other Strikeforce fighter that night. The truth is that there were a group of spectators having a field day heckling Diaz throughout the length of the fight. Diaz would make comments back to them mid-fight even while taking shots from Santos. When he won, Knapp and the others enjoyed Diaz getting his revenge on the fans who now had to watch him wear the belt yet again. 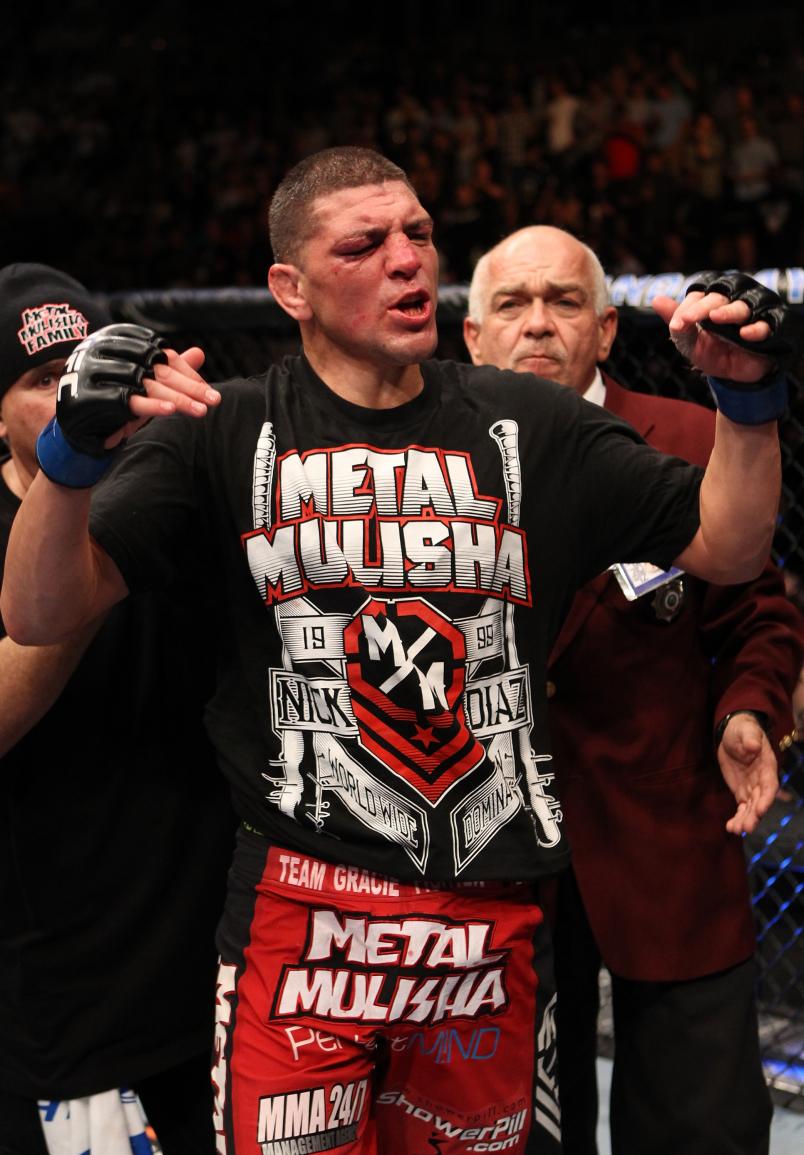 “I never knew that was the way they made it appear,” Knapp said. “That was not it on any level. I was there. I had never seen anything like that. Somebody yelling at the crowd while they were fighting.”

When Knapp’s favorite Diaz moment of her career was spun into him attacking Cris Cyborg, she wasn’t the only one upset by the spin being put on the story. As classless as the broadcast wanted to make Nick Diaz look, it wasn’t a Nick Diaz move.

“It kind of upset [Diaz] because the broadcast was portraying it that he’s talking [smack] to Cris Cyborg,” Knapp said. “If that would have been some female out there it wouldn’t have been like that. Could he have leaned over and said, ‘can you keep your bitch quiet?’ or something, could that have happened? Sure.”

Knapp explained that while it was happening, she was watching her favorite Diaz moment of all time unfold. Winning a fight while also verbally lighting somebody up in the crowd. It came as nothing but disappointment to find out that the moment was spoiled and twisted. Instead of standing up for himself, it transformed to him kicking Cris Cyborg while she was down.

While it’s always fun to make the bad guy look worse, a look inside one of Strikeforce’s most memorable moments without using forum posters as sources only further proves one thing, Nick Diaz doesn’t back down from any man. To the men who got away with throwing drinks and running their mouths to the leader of the Nick Diaz Army, stay away from the 209!

Diaz would successfully defend his Strikeforce title yet again against Paul Daley before returning to the Octagon.

To revisit the night marred by illusion watch the full Strikeforce: Diaz vs. Cyborg event replay ONLY on UFC FIGHT PASS!