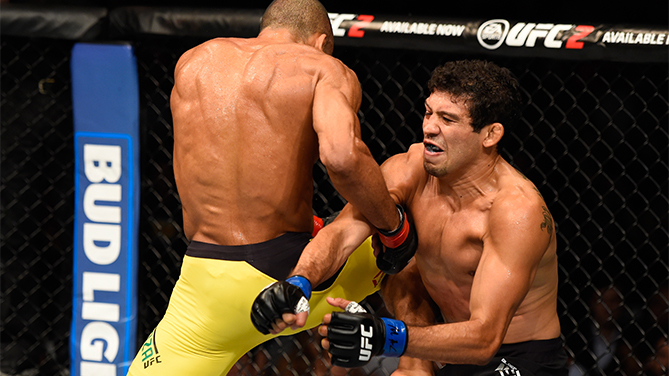 Melendez didn’t shy away from standup exchanges with Barboza in the first round, though two missed takedown attempts played into that reality. “El Nino” did hold his own with the Brazilian for the most part, but Barboza’s kicks did mark up his opponent’s stomach, and he won the punching exchanges late in the round as well.

The kicks began taking their toll on Melendez in the first half of round two as his body and legs were marked up, but a hard right hand from the Californian momentarily shook Barboza up, putting the bout on a level playing field again, forcing the Brazilian to be a little more cautious until he tripped Melendez to the mat in the closing seconds, allowing him to fire off a series of hammerfists before the end of the frame.

The left leg of Melendez took three hard kicks to begin round three, and Melendez was visibly hurt. The former Strikeforce champion refused to stop moving forward, but he was unable to get his offense in gear under the pain and the threat of more kicks. Staying patient, Barboza employed a stick and move strategy, content with peppering his foe and piling up the points. Melendez made a final charge in the last minute, but he was unable to pull off the comeback.

With the win, Rio de Janeiro’s Barboza moves to 18-4; Melendez, who has now lost three straight, falls to 22-6. 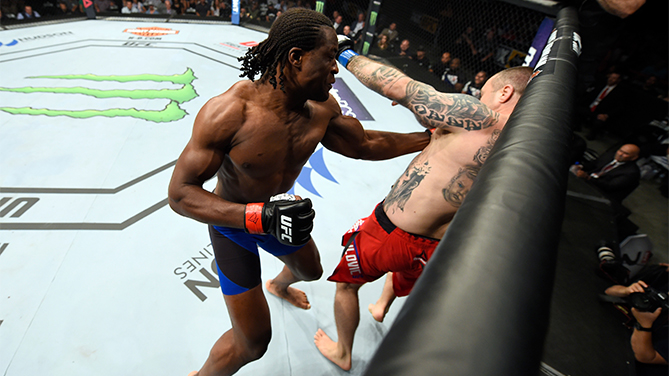 Heavyweight up and comer Francis Ngannou continued to impress in his bout against Bojan Mihajlovic, stopping the Serbian newcomer in the first round.

The 5-foot-11 Mihajlovic seemed perplexed as he tried to figure out how to fight his 6-foot-4 opponent, and when he did engage, that train of thought was appropriate, as a left hand from Ngannou immediately dropped him to the mat. A series of unanswered strikes followed, and that was it, as referee Herb Dean stepped in at 1:34 of the opening round.

With the win, Paris’ Ngannou improves to 8-1; Serbia’s Mihajlovic, who protested the stoppage, falls to 10-4. 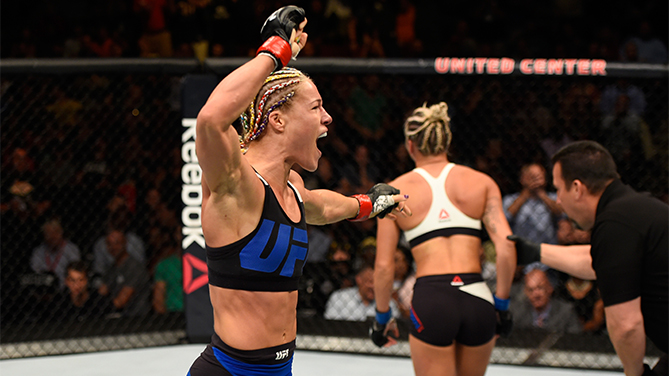 Felice Herrig’s first fight since April of 2015 was a triumphant one, as she submitted Kailin Curran in the first round of their strawweight bout.

Herrrig’s body kicks were on target at the start, but after getting tagged in return, the Illinois native took the bout to the mat. That was no issue for the “Lil’ Bulldog” though, as she quickly took Curran’s back. Herrig sunk in a rear naked choke, and while Curran resisted, eventually she had no choice but to tap out. The official time of the finish was 1:59.