"A hard leg kick put on the right spot causes a lot pain, I mean a lot." - Edson Barboza 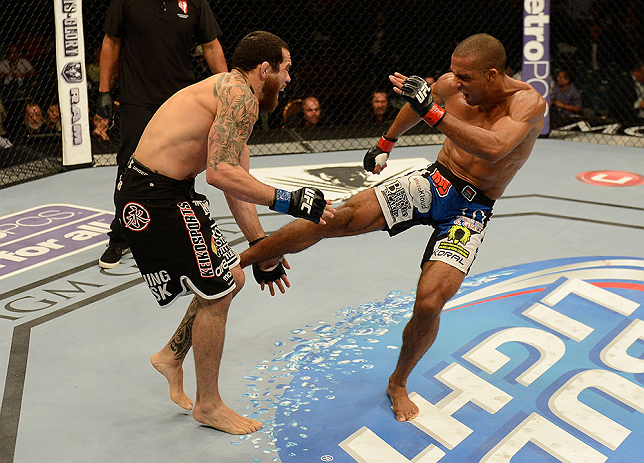 There’s been a lot of talk about Duane Ludwig’s unbeaten run as the head coach of Sacramento’s Team Alpha Male, and it’s an impressive feat for sure. But given the success he’s had and the knockouts his fighters have been producing, will “Bang” send Danny Castillo in to strike with one of the best in the lightweight division, Edson Barboza, when they meet on December 14th?

“Why not?” said Barboza. “It's an MMA Fight. Anything can happen. Some people think that because I am a striker I'll fight standup, and my opponents might do the same thing. But when we talk about an MMA fight, a lot of different things can happen.”

Barboza’s not lying or just being modest. In MMA, you’ve got to be prepared for everything. It’s why he trains with the likes of Frankie Edgar, Ricardo Almeida, and Renzo Gracie, in order to keep all his tools sharpened.

“I love being surrounded by these guys, and I learn a lot from them,” he said. “Every time that I go to the gym I'm able to learn something new and I am very blessed to be part of this team. Frankie is truly an inspiration for everyone; he is a type of guy who is always pushing hard during training. Ricardo and Renzo Gracie are such good people, and they are awesome coaches and friends. I am very happy to have them and also Mark Henry, Marlon Moraes and Anderson Franca as part of my team.”

With such a group behind him, Barboza gets quality work in each aspect of the sport, just like Castillo is getting out on the west coast. So what does the 27-year-old see in “Last Call”?

“He is truly a good athlete,” said Barboza of his foe. “I know he will come prepared for this fight in all areas, so I am also working hard in everything: wrestling, jiu-jitsu, boxing, Muay Thai. Let's see how this fight develops.”

Well, on paper, Barboza is a striker who expects to be able to handle himself if the fight hits the mat. As for Castillo, he’s primarily a wrestler, but his work with Ludwig as well as with Jeff Mayweather in the past puts him in good stead if forced to stand. Looks like a stalemate.

So what’s the wild card?

You know what the wild card is…the leg kicks of Barboza, the ones that have ended two of his UFC bouts, first against Mike Lullo in his 2010 debut, and most recently against Rafaello Oliveira in July. In short, if he can kick you consistently to your legs, he may just knock you out.

“This is a type of a technique that I train a lot and it has been efficient during my fights,” said Barboza. “If my opponent gives me an opportunity, I may say that more leg kick knockouts are coming.”

That’s an ominous statement, especially if you’re fighting him, but you have to wonder, given his success with shots to the legs, why don’t more mixed martial artists use them more than just sporadically?

“I am from Muay Thai,” he said. “I have doing it my entire life. I’ve done this since I was eight years old, and it has always been efficient. Since my first MMA fight I figured out that this technique could be also efficient for MMA fights. It is a simple technique but very aggressive. Three or four leg kicks can change the whole game during a fight.”

How bad is it eating one of those?

“A hard leg kick put on the right spot causes a lot pain, I mean a lot,” said Barboza. “I know because I come from Muay Thai. I used to hit a lot of leg kicks, but I was also hit by them. So I know the damage that it causes.”

Okay, so Barboza has ended two UFC fights with leg kicks, and he owns one of the great head kick knockouts of all-time when he finished off Terry Etim in 2012. Are you starting to wonder what a fight against newly-crowned UFC lightweight champion Anthony Pettis would look like? Barboza has.

“It would be a great fight, because he is a great striker and if the fight would stay on the feet I think it would be an exciting fight,” he said. “I think someone could fall down, and this someone would not be me.”

There is business to be taken care of first though, and Castillo is no joke. Add in that Barboza will be fighting in his opponent’s hometown and likely hearing boos all night, and that’s just another layer to an intriguing matchup. But it’s one he’s not concerned with.

“No, on the contrary,” he said. “I love to be fighting with the pressure on. I hope that everybody goes there and cheers for him because it motivates me much more.”

A motivated Edson Barboza is a scary fighter, and if you think that he’s looking past Castillo, think again.

“I am not worried about this right now,” he said when asked about moving into the title picture with a win. “I am focused on my next fight. I am sure that if I win my next fight I will get closer to the title.”