On the eve of his 20th appearance in the Octagon and nearly eight years after winning the light heavyweight competition on season eight of The Ultimate Fighter, Ryan Bader is approaching things with a much different mindset than he did in the past.

For some time, Bader – like the majority of his contemporaries – was fixated on closing the distance between himself and UFC gold, approaching each bout as either a chase to earn another victory that brings him closer to fighting for the championship or an opportunity to rebound from a setback and restart his climb up the divisional rankings.

He’d gotten close to the top a couple times in the past, famously squaring off with fellow rising star Jon Jones at UFC 126 in what many viewed as a matchup of the two best young talents in the division. Jones got the victory and a chance to fight for the title; Bader returned five months later and lost to Tito Ortiz, marking the first and only time he’s suffered consecutive defeats in his professional career.

Last year, Bader once again seemed to be closing in on a title shot, paired off with fellow contender Daniel Cormier in the main event of a Fight Night show in Cormier’s home state of Louisiana before things at the top of the light heavyweight division went sideways.

Jones was stripped of his title and suspended indefinitely and Cormier was tabbed to face Anthony Johnson for the vacant title. Sitting behind the dais at the post-event press conference, the new champion Cormier and Bader got into a heated shouting match that seemed destined to result in their once-scheduled scrap to be re-booked, but it was Alexander Gustafsson who was tabbed to challenge Cormier instead.

One bout before “DC” successfully defended his title for the first time, Bader pushed his winning streak to five with a unanimous decision win over Rashad Evans.

His reward? A date with Anthony Johnson that brought his run of success to a screeching halt and prompted the 33-year-old perennial contender to alter the way he approaches his career in the cage.

“When I was in that five-fight winning streak, I was worrying about every single outcome,” offered Bader, who returns to action Saturday in a rematch with Rogerio Nogueira that serves as the main event for the second half of this weekend’s twin bill. “I had to go in there to win because I won three fights in a row; I won four fights in a row; I won five fights in a row and if I was ever going to get a shot, it would be off those fights, so I was fighting to win.

“I can’t dictate outcomes – there are too many variables at play – so why not go out there, have fun and fight the way that I know best, which is to let loose and not worry about the outcome so much.” 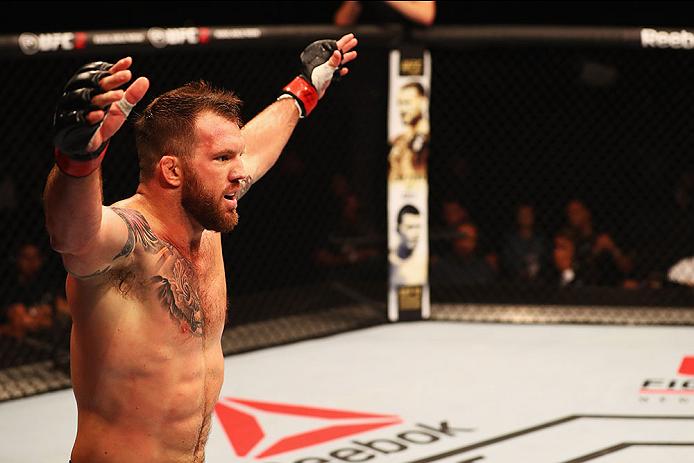 That’s the approach he carried into the Octagon in September when he faced cult favorite Ilir Latifi in Hamburg, Germany and it produced a terrific result.

After surviving a couple dangerous spots against the Swedish powerhouse in the first, Bader caught Latifi with a knee to the head that brought that fight to a sudden stop and returned the Power MMA product to the win column, bolstering his confidence and his new “roll with the punches” approach to his assignments.

“It was great, momentum-wise,” said Bader, who has posted a 14-5 mark in the UFC, with wins over Quinton Jackson and Phil Davis highlighting his resume alongside his prior victory over the man he’ll once again share the cage with this weekend. “To come back and win in devastating fashion like that was awesome.

“It was a great feeling: good for the confidence and good for momentum, knowing that I can knock people out again.”

At first blush, a second go-round with Nogueira doesn’t seem to make sense for Bader from a rankings perspective – he already holds a win over the Brazilian legend, is five places ahead of him in the divisional rankings and doesn’t stand to gain much by going to Sao Paulo and rolling the dice against the man everyone simply refers to as “Little Nog.”

A year ago, Bader might have seen things that way as well, but brandishing a new approach and buoyed by a his second-round stoppage win over Latifi two months ago, the former Arizona State wrestling standout jumped at the opportunity to face Nogueira for a second time with his eye on adding another victory to his record and another solid payday prior to the holidays.

“Right after that fight in September, I took a week off, not doing anything, to let my body get back to normal and heal up, and I started training again because there was talk of a potential fight with Shogun (Rua) on this card, so we were staying in shape, wondering if that was going to happen,” explained Bader, who replaces Alexander Gustafsson in the last of Saturday’s 25 fights split between Belfast and Sao Paulo. “We got the call saying that Gustafsson got hurt and (asking) did I want to step in and fight Little Nog, so we said, ‘Yeah’ because we were ready, it was seven weeks out and why not? Get another fight in, get another paycheck.

“And Little Nog is no slouch,” he added. “He won by knockout in his last fight against Pat Cummins and he’s always – always – a tough guy. He’s one of those guys that is crafty, he’s a veteran, but I just feel that I’ve grown a lot more than he has since our last fight.”