Back to the Wall, Matt Brown Won't Stop Swinging

“I’m not looking at this as I lost three in a row and I have to win this
one. I’m looking at it like I’m walking into the UFC for the first time
on June 26th and this is my chance to do something in the UFC." - Matt Brown 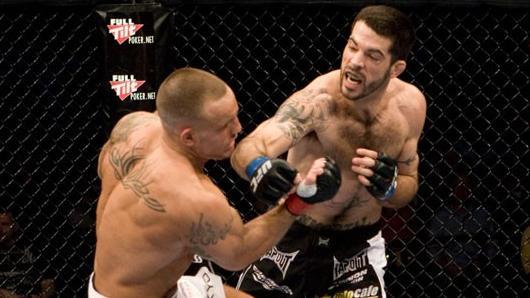 Matt Brown is a helluva nice guy, but for some reason, people want to lie to him. Inexplicably, opponents promise standup wars for the ages with “The Immortal,” and we all buy in, including Brown, but then the night ends, not with a toe-to-toe slugfest, but with a submission win for the other guy.

First it was Chris Lytle, then Brian Foster. But who could blame them? If the Ultimate Fighter alum has an Achilles heel, it’s his ground game. And with eight of his ten losses coming via tap out, it’s no surprise that noted sluggers Lytle and Foster did the smart thing.

So while the fight world is expecting World War III between Brown and John “Doomsday” Howard this Sunday, Brown is well aware that the best intentions go out the window sometimes after a few well-placed shots to the face.

“Why wouldn’t he (Howard) come in and try to shoot a takedown?” asks Brown. “That’s where I’ve lost all my fights. So maybe he’s gonna look for an easy night. But I’ve been working tons on my ground and wrestling, so I think it will be harder than maybe he thinks it would be. But it (the fight) could go a million different ways.”

If the 30-year old Ohio native has his wish, he would love to keep it standing, and Howard’s history and his attitude dictate that there’s a good chance of living up to those expectations. But as Brown is quick to point out, even if Howard stands and trades with him, that doesn’t mean it’s an easy night for him.

“A fight’s a fight,” he said. “I’m pretty used to having different challenges every time, and even if he will stand with me like he says he will, and I assume that he will, it doesn’t take away the challenge because he’s still dangerous on the feet. I believe I’m a better striker than him and he’ll probably look for a takedown at some point, but that’s still a challenge. It’s not like ‘oh, he’s going to stand with me, so now it’s an easy fight.’ It’s still a tough fight and he’s a powerful guy. He hits hard and he’s a dangerous guy, so it’s just a different challenge now.”

It’s not the only one either. Brown enters Sunday’s bout with a three fight losing streak, and since he’s never minced words before, he’s not going to now. He knows that another consecutive loss could cut his UFC career short.

“I know the reality of the situation, and it’s that if I don’t win, I get cut,” said Brown, 4-4 in a UFC stint that began in 2008. “There’s no way you lose four in a row and don’t get cut, and you don’t deserve to not get cut if you lose four in a row. I thought I deserved to be cut after my last fight (against Foster), but I was blessed with another opportunity, and I’m coming into this fight like it’s my first UFC fight. This is my chance and the best thing I can do is make the most of it. I’ve already had the question a million times, is this a must win? Every fight is a must win. This one just has a different reason why it’s a must win, and it’s so I can keep my UFC contract. And even more than that, I want to prove that I belong here. I believe that I do and I believe that I’m good enough to be here.”

In his wins over Ryan Thomas, Pete Sell, and James Wilks, and even in a spirited decision loss to unbeaten contender Dong Hyun Kim, Brown has proven himself as a hard-nosed, hard-hitting battler who always shows up to fight. He’s earned his paycheck every time out, even in defeat, and he’s prepared to do it all again this weekend. So he’s tossing the gravity of the end result to the side and focusing simply on making this the start of a brand new winning streak.

“There’s almost no way to not put more pressure on yourself in this situation, but that’s why I’m coming in looking at it from a totally different view,” he said. “I’m not looking at this as I lost three in a row and I have to win this one. I’m looking at it like I’m walking into the UFC for the first time on June 26th and this is my chance to do something in the UFC. I forgot about the losses, it’s like I’m a new person and no one has ever seen me before, and everything is brand new to me now and I’m coming in as a brand new fighter.”

Brown also has a fresh start as a man as well. A new father to twin boys, he and his fiancée Colleen have settled down with a new home in Ohio, and even though he isn’t working in Washington anymore, Brown has found peace and good training in his native state.

“I’m back with the family, I bought a house and it’s a little more comfortable,” he said. “I’m able to train more, train harder. The twins are happier, it’s a bigger home, and they get to see the family and my family gets to see them grow up.”

Daddy Brown is far removed from his wilder days, when the last thing you would have expected was to see him settled down and happy. Not to mention mowing the lawn and changing diapers.

“Me and my buddy were just talking about that yesterday,” he laughs. “Five years ago, we used to always hang out at this one guy’s house. I lived there and we would hang out, just poor, struggling fighters going out to the club every night and just doing what young fighters do. I was mowing my lawn and he said ‘I never saw you with a house, mowing a lawn, and babies.’ It’s crazy to think about, and you never know where life’s gonna take you. But you’ve got to grow up sometime I guess.”

Well, not necessarily, but Brown is doing a good job of it, and right on time, as he’s hit that old standby of a milestone – 30 years old. But he’s not playing the numbers game, he’s just found what works for him and he’s going with it.

“You just take every day and do the best you can that day,” he said. “I don’t think about the age or anything. Other people mention it, but I just say ‘today, let’s do the best we can’ and that will ensure that tomorrow is a good day.”

He’s hoping that Sunday will be a good day as well, and he’s going into this fight smarter than he ever has, knowing that what people say and what they do are often two different things.

“I kinda fell into that game a little bit, listening to their (his opponents’) pre-fight interview stuff and they’re talking about how they’re going to do this and this, and I’m like ‘that’s awesome.’ (Laughs) And I’d forget about everything else. This time I’m gonna be more open minded and try to impose my will a little more so he’s not even getting to decide whether it stays on the feet or the ground.”