Twenty years in, Andrei Arlovski has a very workmanlike approach to his career.

Where some can get caught up in the fame and pageantry of being a UFC fighter or talk about what they do in poetic ways that accentuate the artistry of mixed martial arts, the former heavyweight champion prefers to keep things simple.

“There is another tough opponent in front of me and I have to do my job,” he said of his pairing with Jairzinho Rozenstruik this weekend at UFC 244. “The priorities in my life are my family, my kids, and I have to provide for them.”

It’s not that Arlovski doesn’t appreciate what he’s accomplished — and he has accomplished a great deal — or doesn’t enjoy his career, it’s just that he is still laser-focused on moving forward, and he has goals he would still like to achieve before he decides to step away from the sport. Plus, the 40-year-old prefers sarcasm and self-deprecation rather than singing his own praises.

Take his thoughts on becoming the heavyweight with the most wins in UFC history, a mark he reached with his hard-fought decision win over Ben Rothwell back in July.

“Listen, if I wasn’t dumb when I didn’t stick with my game plan (earlier in my career), it would have happened earlier and my record might have more victories, but better late than never,” Arlovski said when asked about the accomplishment. “It was a great fight against Ben Rothwell back on July 20 and now I’m ready for another one.

“It’s nice, but for me, it’s not, ‘Wow!’” he added regarding the record-setting triumph. “I still have to train hard in order to get closer and closer to possibly one more title fight, which is the only goal for me.”

More than anything, it’s the goal to fight for the title once more that serves as a constant source of fuel and stands as Arlovski’s singular focus at this stage in his career.

It has been more than 13 years since he last competed in a UFC heavyweight title fight and although he got close to challenging for the title when he rattled off a two-year run with four straight victories upon returning to the promotion, a string of losses to top contenders knocked him out of the running.

Over the last couple years, “The Pit Bull” has struggled to find consistency, amassing three wins and three losses with one no contest result over his last seven outings, a stretch that includes a couple decisions Arlovski believes should have fallen in his favor.

Despite the frustrations and falling out of the mix for the time being, the 48-fight veteran has no plans to halt his pursuit of UFC gold any time soon.

More From UFC 244: Inside the Octagon | Free Fights - Masvidal vs Cowboy | Diaz vs Pettis | Who Is The BMF?

“I’m a happy and blessed fighter because I do what I love to do and my family, my wife lets me pursue my passion,” said Arlovski, who has shared the cage with a who’s who from the heavyweight ranks over the last two decades. “I’m just trying to take care of myself and I want to compete, best case scenario, four or five more years and possibly be champion again.

Halting his four-fight run without a victory by defeating Rothwell this summer in Minneapolis was the first step towards making that happen, and stopping Rozenstruik’s rapid ascent up the divisional ranks this weekend in New York City would be a significant follow up. 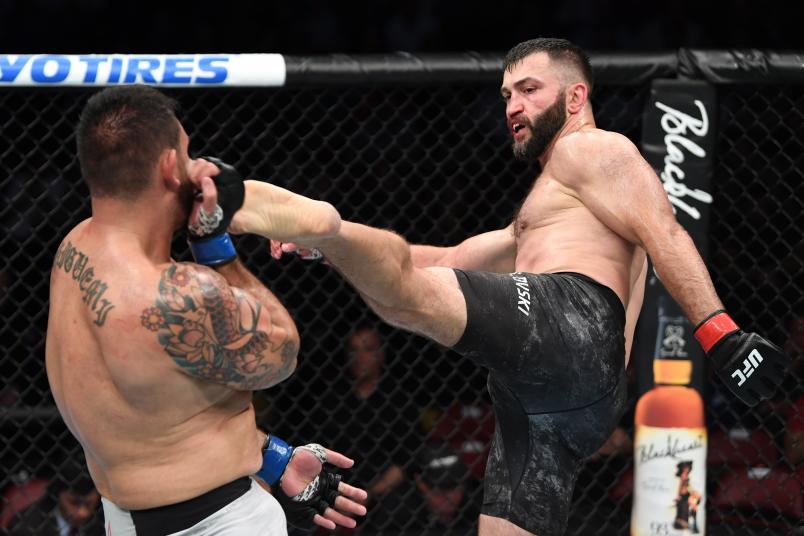 Initially, Arlovski was expecting to compete in December, but when the phone rang offering a chance to compete at Madison Square Garden alongside fellow American Team Top standout Jorge Masvidal, the veteran jumped at the opportunity.

“It’s a legendary arena,” he said of the venerable building at sits on Pennsylvania Plaza and has played host to countless historic clashes over the years. “I thought I was going to fight December 7 or December 14, but when my manager told me, ‘Listen, we have an opportunity to fight at Madison Square Garden, BMF title between Jorge and Diaz,’ I said, ‘F*** yeah!’

“It’s a once in a lifetime opportunity to fight at Madison Square Garden, so of course I want to fight there,” Arlovski continued. “Once I got back from Abu Dhabi, I started my camp right away. Everything happens for a reason and I’m very happy to be one of the fights on the card at Madison Square Garden. I believe it’s going to be a great card, great fights and I’m happy to be a part of it.”

Two fights into his UFC career, Rozenstruik has quickly established himself as a person of interest in the heavyweight division, garnering a pair of highlight reel knockouts while pushing his record to 8-0.

In his debut, the kickboxer from Suriname blasted Brazilian Junior Albini with a combination that left him lying on the canvas less than a minute into the second round, and four months later, “Bigi Boy” followed it up with a nine-second knockout win over Allen Crowder.

“He’s a great striker. On the ground, maybe not so much, so we’ll see,” Arlovski said, offering his impression of the man he faces this weekend. “I like to strike, I like to box, I like to knock people down, but we’ll see what’s going to come first. I’ll take anything.

“The mission is to win,” he added. “I’m not being cocky; I’m taking him seriously. I have great kickboxers and boxers for sparring partners, so it was a great camp and I think I’m going to be ready for every area.