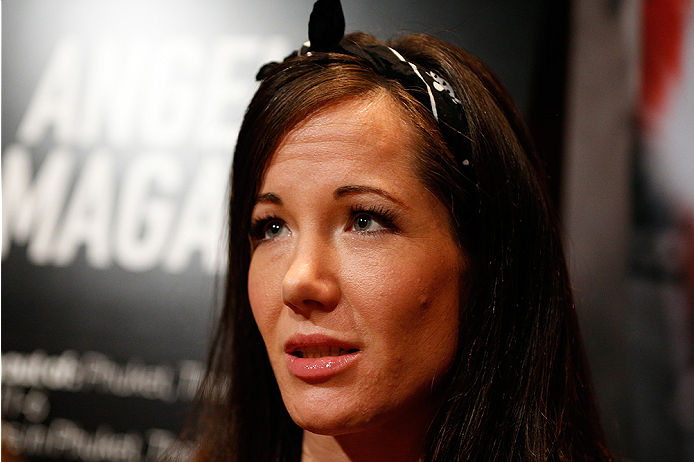 Take one glance at the pro MMA record of UFC strawweight Angela Magana, and might conclude that her manager doesn’t like her too much.

Then again, Magana has always handled her own affairs when it came to who she fought, so if she wants to blame anyone for fighting killers like Jessica Aguilar (three times), Jessica Penne, Barb Honchak and Jessica Eye in her first five years as a pro, she can look in the mirror.

“Your Majesty” has no complaints.

“I fought whoever,” she said of her formative years in the sport. “I believe that if you’re ready to fight MMA, you’re ready to fight anybody. And that’s kind of an old school way of thinking. But that was my thought process – I’m gonna fight anybody and everybody. For a while, I couldn’t get a fight, so I fought Jessica Eye at 125, and that was because nobody would fight me at 115. But I took on all comers.”

She had her share of losses along the way, but she also compiled wins against top-level opposition, learning on the job while beating the likes of Aguilar – a UFC newcomer widely considered to be one of the best 115-pounders in the world – in the third of their three bouts, as well as Honchak, the current Invicta FC flyweight champion.

So even though the record of 11-7 doesn’t shine, there’s a lot of experience behind it, and to Magana, all that really matters is what happens from Sunday night – when she faces Michelle Waterson – forward.

“For us women, I don’t think our records really matter as much as far as what our potential is,” she said. “In the early stages of women’s MMA, we were all fighting out of our weight classes or we couldn’t fight. My mind doesn’t even go there, to be honest.”

It’s a great attitude to take, and she’s right. There’s really no such thing as a padded record among the top fighters in women’s MMA, especially with the veterans who have been around a while like Magana – who turned pro in 2007 - has. That’s why when some of the misinformed hit social media and say that after her UFC debut loss to Tecia Torres and previous defeats to Eye and Stephanie Eggink that the Los Angeles native isn’t ready for the next level in the Octagon, she pays it no mind. In fact, she doesn’t even look at it.

“I’ve never even seen one of those posts,” Magana said. “What I put out on social media is for me. That’s my arena, my playground.”

Unfortunately, some of her banter on social media has garnered more attention than her fighting and compelling back story, which includes her comeback from a broken back suffered in a car accident that had doctors saying she would never fight again. She did, returning in 2013, and she’s still going strong today. Maybe even stronger, considering that she now works with the Alliance MMA camp in San Diego after a long run in Thailand.

And she can thank her castmate on The Ultimate Fighter 20, fellow strawweight standout Bec Rawlings, for getting her to change teams.

“The best thing that came out of TUF 20 was my friendship with Bec, and the next best thing was her having me come out to Alliance,” Magana said. “She wanted me to come out to help her get ready for Lisa Ellis, but my plan was to go out to California and to go to a few gyms. And after the first day or two at Alliance, I was like ‘I’m staying here.’ They have a whole team of coaches who are in complete communication with each other. All I have to do is show up to practice. They know everything about my training, where I’m at, when I’m peaking, what I’m eating, and they’re completely involved. I really believe that I’ve been born again as a fighter from the blood and the sweat on the mats at Alliance MMA. It’s amazing there.”

On Sunday, she gets to put her new lessons to work where it matters – in the Octagon – and with all the advance hype surrounding her opponent, “The Karate Hottie,” a Magana win over Waterson will send shockwaves throughout the division and let her peers and fight fans know that the fighter they saw against Torres last year is gone forever.

“I don’t even think about that fight (against Torres), I haven’t watched it, I want nothing to do with it, and I want people to think that’s the person they’re going to see, and I hope that’s what she thinks, because it’s a whole other monster coming in that cage on July 12.”