“It’s always very emotional to win. After months of training and dedication this is when I show my work." - Anderson Silva 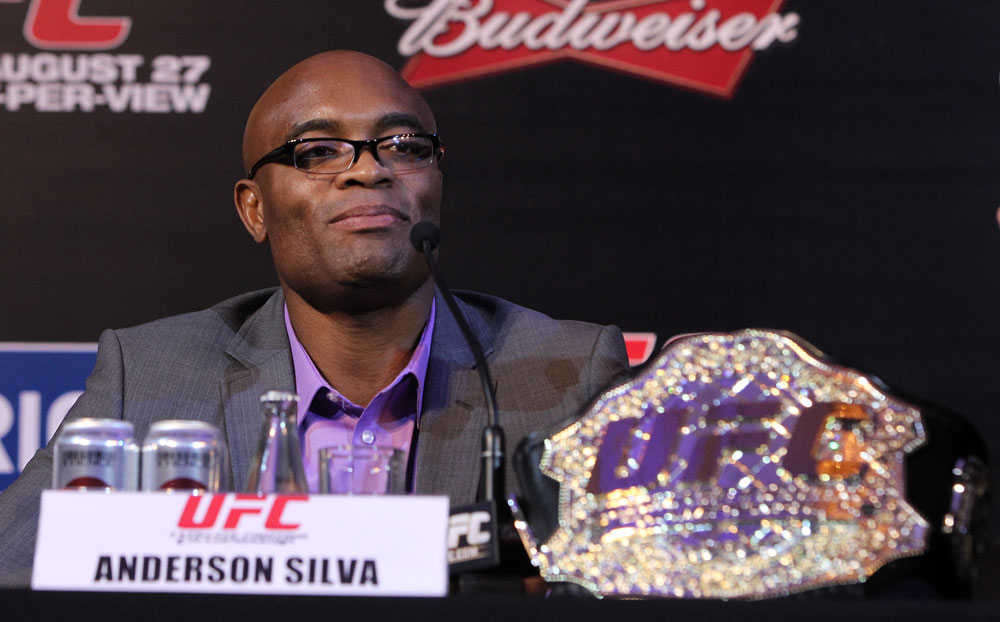 The transition from star to icon is a sudden one. Sure, there are signs along the way that the tipping point is coming, but when it does arrive, it almost sneaks up on you.

For UFC middleweight champion Anderson Silva, his move into that rarefied sporting air that only a few occupy came in sneaky, then explosive form, all in one, when a single front kick to the face of countryman Vitor Belfort in the first round of their UFC 126 bout knocked out “The Phenom,” and set a sport on fire once again.

It was a far cry from 2010 for “The Spider,” as he survived a year in which he was vilified for a bizarre decision win over Demian Maia and then given a steady four-plus round thrashing from Chael Sonnen before a miracle fifth round comeback.

Now, the Curitiba, Brazil native is coming off the stirring knockout of Belfort, a successful showing of the documentary about his fight with Sonnen, “Like Water,” at the Tribeca Film Festival, and perhaps most notably, recent endorsement deals with Burger King and Nike.

“First of all it’s an honor to have such companies put faith in my work, and help bring MMA to mainstream sponsors,” said Silva through translator Derek Kronig Lee. “It’s a great opportunity for myself and all the fighters.”

This Saturday night, Silva will fight in his home country for the first time since 2003, and while he doesn’t remember the specifics of his last bout on home soil – a first round TKO of Waldir dos Anjos – he does welcome the opportunity to return.

“It’s great to be fighting in Brazil again after such a long time defending the country overseas,” said Silva, and that’s been the responsibility for so many of the sport’s greatest competitors over the years. After fighting their way through the Brazilian fight circuit and proving themselves, it was off to the United States, Japan, and sometimes Europe if they wanted to make a career in the sport.

From Silva to “Minotauro” Nogueira, “Shogun” Rua, Wanderlei Silva, Belfort, Lyoto Machida, Jose Aldo, and so many more, to become stars in the sport Royce Gracie and his family introduced to the world in 1993, it was necessary to leave their home land. That was tough, but living with the knowledge that you could create a better life for yourself and your family if you left but not doing so was even worse.

So Silva and the aforementioned fighters made their reputations elsewhere. Many would still train at home and live in Brazil between fights, but they were unable to showcase their wares for their people.

But things have changed, as evidenced by the rapid sellout of the HSBC Arena in Rio De Janeiro for Saturday’s UFC RIO card, and of the amazing reception the fighters and the UFC have received in the country.

“The sport has grown and matured a lot,” said Silva. “A lot of things that needed to change have changed and it created a true sport that has a huge fanbase all over the world and has grown immensely in Brazil in the past few years.  I am grateful to make a living from what I love to do.”

Did he ever see this day coming back when he was just another promising up and comer on the local fight scene?

“It’s hard to say because I don’t know if anyone back then was really thinking about how big it could potentially get.”

It’s an honest answer because back then, a hungry young fighter was just that – a hungry young fighter. The priority was winning fights so your paychecks would increase and you could put food on the table. This way of life made fighters. And no matter how Silva’s life has changed for the better in the last few years, he remains a fighter.

For proof, look no further than the Sonnen and Belfort bouts. Against Sonnen, he could have curled up in a defensive shell in the fifth round, content just not to take any more punishment in a fight he was on his way to losing on the scorecards. He didn’t. He kept fighting and pulled off a miracle comeback win. With Belfort, there was some heat between the two former training partners, with Silva definitely intent on teaching his challenger a painful lesson. He did.

It was an emotional two fight stretch for Silva, which makes you wonder whether he can dig down deep and reignite the fire he had for Sonnen and Belfort for a new challenger in number one contender Yushin Okami.

“It’s always very emotional to win,” he admits. “After months of training and dedication this is when I show my work. It’s my job, this is what I love to do and thankfully I am healthy and able to continue doing what I love.”

And you would think that if he needs any sort of push, Okami is the last man to beat him, at least technically. But that was via disqualification in 2006, Okami doesn’t even consider it a win, and Silva, well, he just says “A fight is a fight, and win or lose, it’s in the past.”

So that’s that. But just because there isn’t the heated rivalry between Silva and Belfort or the trash talking Sonnen to ignite Saturday’s main event, that doesn’t mean it isn’t an intriguing bout. On the contrary. Okami is a powerhouse groundfighter who can control and win a fight if he gets his hands on you and takes you down. Sound familiar? Well, the same man who almost pulled that strategy off to perfection – Sonnen – has been Okami’s lead training partner in Oregon. Mention this to Silva and wonder if he expects Okami to try and implement a similar gameplan, the answer is a terse one.

What Silva does know is that despite his record-setting stint in the UFC thus far, Okami won’t care about all that when the bell rings. So the 36-year old champion has prepared accordingly, and he’s ready to do whatever is necessary to send the Rio fans home happy.

“It’s a tough fight,” said Silva. “He (Okami) is a complete fighter and I think the fight could be decided on our feet and on the ground as well. I think he will be prepared to go where the fight takes us and so will I.”

It’s about the only thing that remains constant for Anderson Silva – the desire to fight, win, and perform to the best of his ability. The rest? Well, he’s an icon of mixed martial arts now – abroad, and at home. He’s come full circle in his life and his career, but strangely enough, he’s not satisfied yet.

“I want to keep defending my belt and writing my history in MMA,” he said.

You want to tell him he can’t?