Anderson grows closer with his father during UFC run

Henry Anderson never wanted his youngest child to be a professional prizefighter, and the no nonsense dad wasn’t shy about letting Corey Anderson know about it.

“Who would want to fight?” he asked his son. The way he saw it, Corey had his college degree, his run on the wrestling mats was one to be proud of, and the next step was joining the family roofing business.

That wasn’t the young man’s path, though. And on Saturday night, nearly four years after his pro mixed martial arts debut, Corey Anderson will be in London, England, headlining a UFC event against fellow light heavyweight contender Jimi Manuwa.

And no one will be cheering harder than Henry Anderson, who has even started wearing his son’s UFC gear around Rockton, Illinois.

“I’ve always been close to my dad, but we got a lot closer since I’ve been in the UFC,” Corey said. “Now, he’s growing into the sport with me. He’s learning so much more, his employees talk about the fights and he’s learning from them and studying stuff online. I like it now that my father started to get into it. I always like to share that with him.”
RELATED CONTENT: Anderson - I'm Coming for Jimi | London UFC Breakdown | Reasons to Watch | Fantasy Preview

It wasn’t an easy sell for the patriarch of the Anderson family, but as his son points out, he always followed his muse.

“This is his youngest son, the one who’s the complete opposite of everybody else,” Corey laughs. “I didn’t get into the family business, I didn’t stay home and work, I left home at 17 and I just kept doing my own thing. But he’s seeing that I’m not a kid anymore. I’m my own man and doing my own thing.”

He reels off the names of his coaches and training partners, and it’s a who’s who of the east coast fight game, from Almeida and Catone to the likes of Edgar, Weidman, Villante, Branch and McGeery.

“I can watch what they do and break down what they do, study their moves and it helps build my Fight IQ,” Anderson said. “In every school district, there’s always that one kid that was super young but super smart and they bumped up a grade. I feel like that’s me in this situation. I’m 27 years old, I debuted four years ago, but here I am fighting with these guys that have been doing it for 10 to 15 years. So I stay hungry and humble and I continue to study. I’ve always had that white belt mentality, and I still do now. I’m always willing to learn something new.”

But a fighter can only learn so much in the gym. It’s in battle that a fighter emerges, one who will either be in this for the long run or get pushed aside. Anderson is proving that he has the stuff for a long and successful career, and it’s not because he’s tearing through all comers. He’s had wins like that, most recently a second-round TKO of Sean O’Connell in December. But it’s losing a close decision to Brazilian icon “Shogun” Rua, engaging in a Fight of the Night war with Gian Villante, and winning the TUF tournament after six weeks locked away from the outside world that have earned him his stripes as much as his victories have.

“In four years, I went through all of that, some stuff a lot of people haven’t even experienced yet and they’ve been fighting for 10-12 years,” he said. “I started in this so young. When I came into it, I was the baby. I posted about Daniel Cormier and those guys after I won The Ultimate Fighter, and I told them I’m here to be the champ. And they laughed at me. But I was always serious about what I said.” 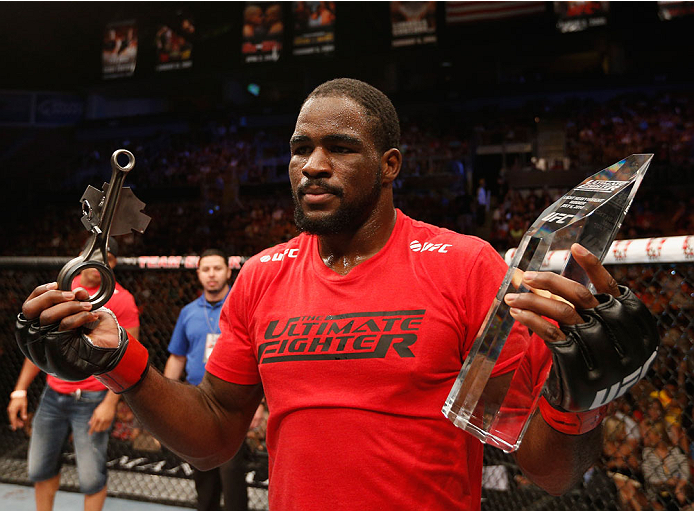 No one’s laughing at Corey Anderson now. The Illinois native is a top ten contender, a win on Saturday will move him even further up the ladder, and if his phone rings with an offer to fight for the championship, he’s saying yes with no hesitation.

“Of course, a hundred percent,” said Anderson, who explains that despite a shoulder injury, he offered to step in for Jon Jones when the former champion’s UFC 200 bout with Daniel Cormier was scrapped last July. “After that Shogun loss, a switch went off. There was no more playing around.”

If it sounds like perfect timing, it is. Anderson is ready, his dad is on board, and he’s received the nod of approval from his most important sounding board, his older brother Curtis.

“I don’t talk about him as much, but he’s the one behind the scenes that I would always turn to first with questions about competing,” Anderson said of his brother.

So is Graduation Day just about here?

“I don’t think it’s quite Graduation Day, but I’m always learning something new and I’ve had a lot of lessons,” Anderson said. “But we’re coming up on final exams. This (the Manuwa fight) is the big one, it’s that statement fight I was talking about. After this fight, I’ll be close to walking across that stage and getting that diploma.”