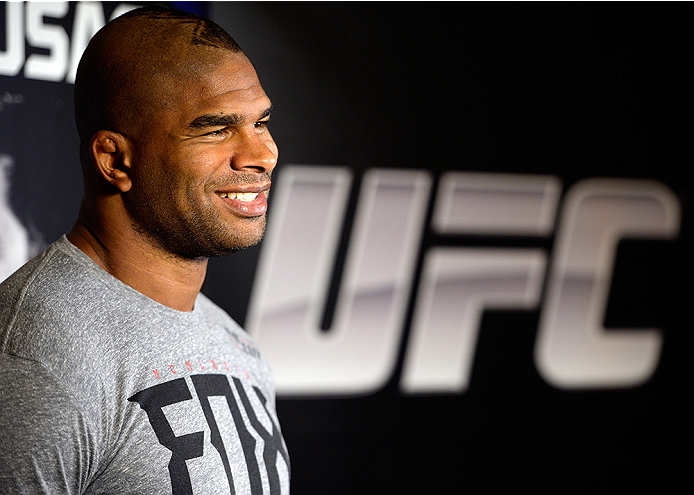 Every fighter reacts to setbacks differently.

After more than 15 years competing on the biggest stages in the sport, Alistair Overeem isn’t one to let the stinging effects of a loss linger or have too great an impact on his overall approach to his career in the cage.

Back in September, the 34-year-old entered the Octagon opposite veteran Ben Rothwell in a bout that would propel the winner to the fringes of title contention in the heavyweight ranks. Coming off a measured, yet still dominant, victory over Frank Mir at UFC 168, Overeem was looking for the first two-fight winning streak of his UFC career and believed he had all the pieces in place to accomplish that feat when he took to the cage inside the Foxwoods Resort Casino.

Following a tenuous stint as part of the South Florida-based Blackzilians camp, the former Strikeforce champion opted to make a change and joined the all-star cast of competitors training at the Jackson-Winkeljohn facility on Acoma Street in Albuquerque, New Mexico. Preparing alongside the likes of Andrei Arlovski, Jon Jones and heavyweight prospect Cody East – not to mention coaches Greg Jackson, Mike Winkeljohn and Brandon Gibson – Overeem felt sharp stepping into the Octagon opposite Rothwell and he anticipated picking up another stoppage victory.

The bout indeed ended with a quick stoppage, but it was “The Reem” that was dropped and saddled with the loss.

While some fighters might react to such a result with frustration or self-doubt, the even-keeled Dutch heavyweight has taken the defeat in stride, identifying the adjustments that need to be made as he prepares to return to action Saturday night against his countryman, Stefan Struve.

“I think one of my strong points is my analytical side,” Overeem, who is just 2-3 under the UFC banner since arriving from Strikeforce with lofty expectations, said. “I switch the emotional thing off because that’s not going to help you anyway. I turn bad experiences into actions and what needs to be done and I focus on getting that done.

Having competed around the world and trained with several elite teams over a career that has produced world titles in both kickboxing and mixed martial arts, Overeem has figured out the things he’s looking for in a team and during his training camps and says that the fit as a member of Team Jackson-Winkeljohn felt right from the start.

“In the last fight, I felt great, but it did not come out in the fight. I started okay, but I got caught and that was the end of that,” he offers casually, the setback clearly already in the rearview mirror. “I know it’s going to come out because I feel good – I’m on point with my food, I know what targets I’m getting in my strength and conditioning programs, I know what I’m doing with my sparring partners.

“That last one is a big one because I have good sparring partners here like Andrei Arlovski, Cody East, Jon Jones. I know I’m putting a lot of pressure on these guys. It’s no fun to spar with me and if you look at their achievements, they’re doing good at the moment. I just had a loss, but I just know there is definitely more in there.”

After debuting in the UFC with a first-round technical knockout win over Brock Lesnar at UFC 141, the man with 37 victories and more than 50 professional fights to his name has struggled to a 1-3 record over his last four outings, and even his victory over Mir came under heavy scrutiny.

That is a reality that Overeem came to terms with long ago, believing that no matter what level you’re competing at, the pressure to perform is always there. Rather than dwell on expectations and the potential dire straits he finds himself in heading into Saturday’s meeting with Struve, the balanced, analytical heavyweight is simply focused on what he needs to do once the Octagon door closes.

“In the Frank Mir fight, I changed my fight style but I was still very dominant. I hit the guy 139 times and he hit me five times. Respect to Frank because if you’re getting beat up like that and you keep going, that is showing heart, so respect for Frank. If it was up to me, he would have stopped or quit or got knocked out, but he was tough. My thing was that I was not going to gas myself trying to finish him because then I become susceptible to his finish.

“I took a little bit more active approach (against Mir) and that continued in the last fight. It’s very unfortunate that that did not go my way, but I continued and now here we are against Stefan Struve.

“The way I deal with is that I just prepare – I focus on the task at hand, what do I need to do, watch a lot of tapes and get the right sparring partners. For me, it’s a full-time job and I don’t really worry too much about ‘this is going to happen, that is going to happen’ in the sense of the bad (things); I just focus on what I need to do.”

And what he needs to do Saturday against Struve is finish what he started back in September.

“With the Rothwell fight, the formula was good – I was feeling great, I was in great shape, I was ripped, I was strong, cardio was great. Unfortunately I didn’t get the reward in that one, but we’re going to get it with Stefan. I’m very optimistic about that.”