"On a good day with everything going right, I can beat anybody, and on a bad day, I can find a way to win." - Al Iaquinta 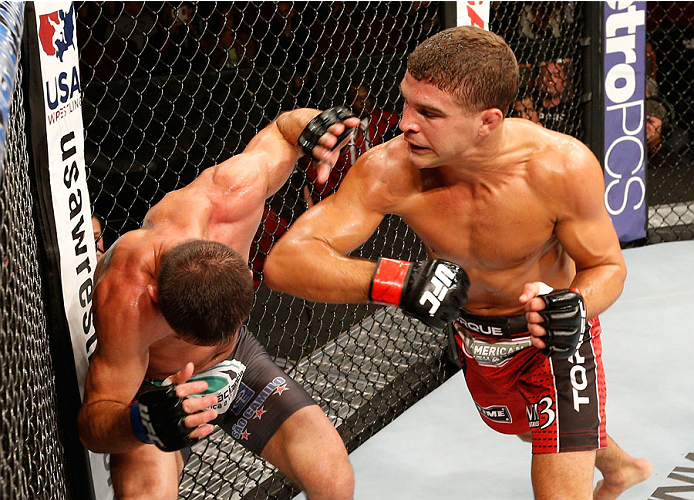 Whether deserved or not (and I’ll plead the fifth on that), New Yorkers often get a reputation as complainers. Even worse, if you’re not a complainer, you may get dubbed a whiner. But Long Island’s Al Iaquinta is not a complainer or a whiner, so if you expect him to talk about the things he’s given up to be a 27-year-old UFC fighter competing in a co-main event tomorrow night against Ross Pearson, this isn’t that guy.

“This is the life I’ve chosen,” he said.

Of course, the way this topic came up was when discussing Iaquinta’s loss to Mitch Clarke earlier this year. Not to beat a dead horse, but it does pay to repeat that while most fighters don’t like to lose, Iaquinta hates it, and that’s what makes him who he is as a fighter. People appreciate someone with that much competitive spirit, hence, the topic of the Clarke fight once again.

“I still don’t like talking about that fight,” Iaquinta said. “The only thing you can do is what I did and just come back stronger, use it as fuel for the fire. It kept me down for a while, but I made up my mind that I’m not gonna get caught, I’m gonna be the one catching people and it’s starting to happen. I’m gonna build off that win, and hopefully it’s going to be that loss that really fuels me forever and brings me to that top level and gets me to the top.”

That win was a third round TKO of Rodrigo Damm in September that was clearly Iaquinta’s best performance as a UFC fighter. Sharp everywhere from the start to the finish, “Raging” Al basically erased the memory of the Clarke fight in 12 minutes and 26 seconds. It was as close as you’ll get to a perfect game in the fight business, and Iaquinta says that it all started from the time he woke up in Connecticut on fight day.

“It felt like everything went as good as it could,” he said. “I woke up in the morning and I felt awesome from the weight cut. Sometimes you feel a little bloated, but I felt great. I shadowboxed to get a sweat going, and it was almost eerie how good it was going. When things go too good, something bad has to happen, right? (Laughs) But I kept an optimistic view on everything, and the whole trip went as good, if not better, than expected.”

The victory was Iaquinta’s fourth since entering the UFC after season 15 of The Ultimate Fighter, and it put him back on track for what turned out to be a big fight against Pearson. But when discussing the Clarke and Damm bouts, and the turnaround from May to September in terms of attitude, I wondered aloud why other fighters say losses are “just part of the game” while Iaquinta took losing as a supreme insult.

“Those usually aren’t the guys that get to the top quickly,” he said of the “losing is part of the game” guys. “It’s got to eat at you if you take this seriously. I really don’t think anyone can beat me; I can beat everybody. On a good day with everything going right, I can beat anybody, and on a bad day, I can find a way to win. There’s no excuse for losing and I train way too hard and do all the right things. If I was doing stupid things and not taking this seriously, then losing probably wouldn’t be a big deal for me. But this is my life. There are things I’m missing out on because I want to get that W and I’m gonna get it.”

So with that mindset, it wasn’t surprising that he jumped right back into the fray and accepted a fight with Pearson just two months after the Damm fight.

“The only hesitation I had was is (coach) Ray Longo cool with being on a plane for 20 hours (Laughs), and when he said he’s down, I said I’m down,” Iaquinta said. “This is an opportunity not a lot of guys get in their life. I’m gonna be in front of a bunch of people in Australia, halfway around the world, it’s gonna be a crazy experience, and shame on me if I would have turned down this fight. This is what I’ve worked for, this is what I dreamed about since I got into this sport. This is what it’s all about.”

But is “Raging” Al ready for the biggest fight of his career? You know the answer to that one

“He’s a name in this sport, he’s got a lot of name recognition, so I beat him I’m right there,” Iaquinta said. “I’ve got to put on a performance that I know I’m capable of and it’s gonna be a good night and it will propel me up the ranks.”