After A Few Detours, Derek Brunson Arrives in the UFC

"The UFC was my ultimate goal from the beginning, so it’s a fresh start for me." - Derek Brunson 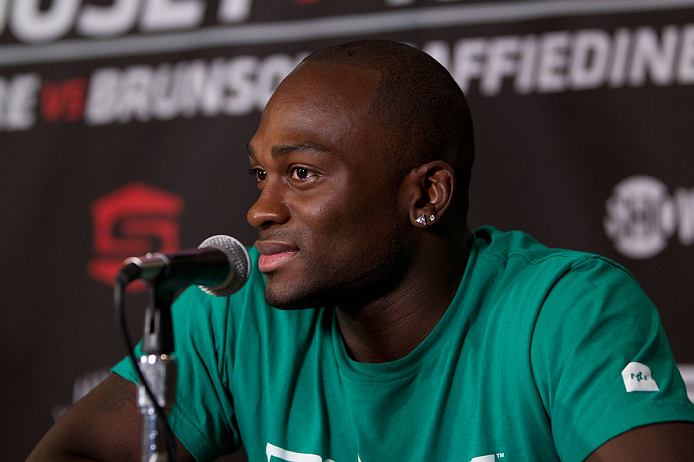 If not for a certain something that took place last week, Derek Brunson would have assessed 2012 as “the worst year of my life.”

But when that certain something is a call from the UFC to make your debut on this Saturday’s UFC 155 main card against one of the organization’s standout names in Chris Leben, it tends to improve your outlook a bit.

“Now it’s the greatest opportunity of my life, and that’s how I look at it right now,” said Brunson, a former Strikeforce standout who got the late notice call after Karlos Vemola was forced from the Leben bout due to injury. When that happened, Brunson’s manager didn’t get a ‘hey, would Derek like to fight Chris Leben?’ call a week ago. It was more to the point than that. It was ‘is Derek in shape?’

When the answer came back in the affirmative, he was offered Leben. Brunson didn’t hesitate to say yes.

“He (Leben) is definitely a name guy, I like the stylistic matchup, and I thought it was a good opportunity for me,” said the 28-year-old North Carolina native, who got a rousing response on social media outlets when he announced his signing.

“It’s been good,” he said. “Everybody’s been sending positive vibes and are real happy about the situation, and they’re glad I got my opportunity, as well as I am.”

All good things. So what’s the downside of getting one week to prepare for a fight?

“Exactly what you said – I’ve got a fight in a week,” laughs Brunson. “But if you can’t get up for the UFC, you can’t get up for nothing when it comes to the fight world. So I definitely look to that as my ultimate motivation and that’s gonna get me through the fight more so than anything. Obviously I didn’t have the longest training camp, but it’s a great opportunity and a lot of people would love to be in my spot. I’m definitely not looking to go out there and lay down. I’m going out there to win and do work.”

And if you’ve seen Brunson in action, you know that he can handle life in the UFC. A three-time Division II All-American wrestler for the University of North Carolina at Pembroke, he has long been one of Strikeforce’s rising stars, winning three of his four bouts in the promotion, but after a 9-0 start to his career, that pesky 2012 rolled around.

First, a scheduled March bout with former Strikeforce middleweight champion Ronaldo “Jacare” Souza was scrapped when Brunson wasn’t licensed due to his failure of an eye exam. Quickly undergoing PRK laser eye surgery, Brunson was back in the gym within six days, but as he waited for his next call from Strikeforce, he took a bout with UFC vet Kendall Grove on four days’ notice in June. What followed was his first pro loss, albeit one via highly controversial split decision.

Two months later, he got the Souza fight in Strikeforce, but he may have wished he didn’t, as he was knocked out in 41 seconds by the Brazilian standout. Now 9-2, things got even nuttier for Brunson when a spot on The Ultimate Fighter’s 17th season cast was yanked away due to a contractual issue. It kind of makes all that “worst year of my life” stuff all make sense.

“This past year was so rough, it was ridiculous,” he said. “It seemed like everything that I set up was just broken down and things didn’t go my way. But the UFC was my ultimate goal from the beginning, so it’s a fresh start for me.”

Sometimes, that’s all a fighter needs, even though it might be weird for someone who has been moving up the ranks the last couple years being put in the position of being the “new guy” simply because casual UFC fans may not have seen him before.

“It’s not weird,” Brunson counters. “Honestly, when I set my goals when I started doing MMA, this is definitely where I expected to be at. I actually had a chance early in my career to be in the UFC, I just needed a couple more fights, but Strikeforce came and offered me more fights at that time. This has definitely been my plan since Day One, and where I wanted to be, so I feel like it’s just the next step and I need to put on a good performance and get the job done this weekend.”

In a lot of ways, coming into a big fight like this on short notice is the best case scenario for Brunson, a fighter who wants to fight and stay active, and who doesn’t have two months to overanalyze his opponent and the idea of his Octagon debut.

“That’s definitely a positive,” he said. “I wasn’t too worried about the UFC jitters - I have an extensive college wrestling background, and I also fought in Strikeforce, which is a big stage, so I definitely wasn’t worried about the jitters thing so much. But two months to analyze and think about your opponent, ‘man, he’s really good here,’ or ‘he can really do this.’ Now it’s just kinda like okay, I know what he does, let’s go out there and do it and stop what he’s doing.”

And hey, debuting on the main card of one of the biggest shows of the year is a lot better than spending a season in the Ultimate Fighter house, right?

“Oh yeah, for sure,” laughs Brunson. “That would have been a grind. To be stuck in that house for close to seven weeks would have just been miserable.”

Who said things don’t happen for a reason?