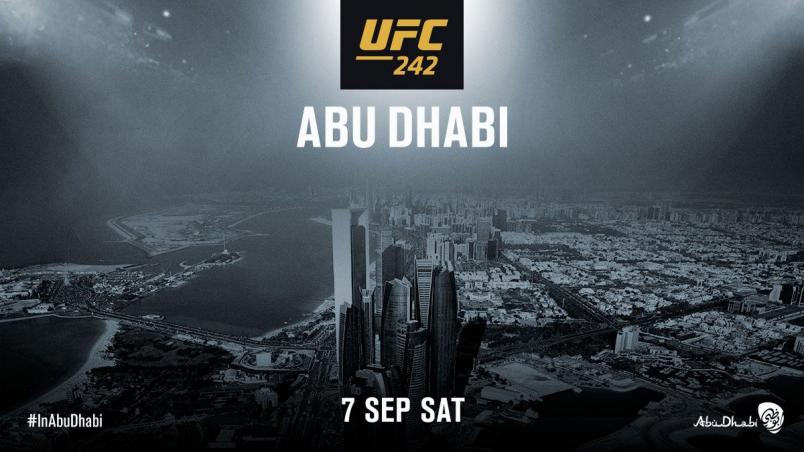 LAS VEGAS and ABU DHABI – UFC®, the world’s premier mixed martial arts organization, and the Department of Culture and Tourism - Abu Dhabi (DCT Abu Dhabi) today announced a groundbreaking new partnership to bring UFC events to the emirate for the next five years, beginning with UFC® 242 on Saturday, 7 September.

UFC will be a part of Abu Dhabi’s continually growing mega events calendar, with new festivals, sporting events and other initiatives being drawn to the emirate in part by the attractive benefits offered by the Advantage Abu Dhabi programme. Advantage Abu Dhabi provides a unique opportunity for event organisers, increasing the overall value proposition of the destination by providing an array of support services throughout the event planning cycle. The partnership with UFC is the latest to demonstrate the power of the programme in creating new business opportunities in Abu Dhabi.

“Abu Dhabi is now firmly established as a unique tourism destination which offers a diverse mix of activities and initiatives that cater to all kinds of audience and visitors,” said HE Mohamed Khalifa Al Mubarak, Chairman, DCT Abu Dhabi.  “The emirate also has a strong affiliation with world-class sporting events, such as the FIFA World Club Cup, the Formula One Etihad Airways Abu Dhabi Grand Prix and the Red Bull Air Race, and now this deal to bring UFC here allows us to once again show our ability to stage major events that thrill visitors and residents alike.  UFC will become  a key component of Abu Dhabi’s thriving events calendar for the next five years, which is already packed full of not only great sporting events, but also cultural, arts and entertainment offerings as well.  This spectacular mixed martial arts event, which has a huge following around the world, will bring heightened impetus to visitation in the third quarter for the emirate and will no doubt boost incoming tourist numbers as fight fans across the world gather in Abu Dhabi.”

“We are making a long-term commitment to Abu Dhabi because we have had great success in that market,” said UFC President Dana White.  “The demand from our fans to bring UFC back to Abu Dhabi has been overwhelming, and over the next five years, DCT Abu Dhabi will help us deliver some spectacular UFC championship fights to the UAE.   I’m very excited about this partnership and what it will mean for the growth of this sport and for UFC in the region.”

UFC previously held live events in Abu Dhabi in 2010 and in 2014.  UFC made history with its first event, UFC 112®: INVINCIBLE, on April 10, 2010, as it was the promotion’s first held outdoors.  To stage the event, UFC built an open-air arena on Yas Island adjacent to Ferrari World Abu Dhabi.  UFC returned to Abu Dhabi on April 11, 2014, as the promotion hosted UFC® FIGHT NIGHT: NOGUEIRA vs. NELSON at du Arena on Yas Island.

UFC 242 on Saturday, 7 September, will be the culmination of a week-long series of activities available to fans that travel from around the world and converge on Abu Dhabi for the event.  Fans will be treated to a UFC fight week that will include open workouts, weigh-ins, press conferences, live entertainment, and more.

Additional details about UFC 242, including venue, scheduled fights, ticket sales, and activities for fight week, will be announced at a later date.  Fans are encouraged to sign up for the latest news and ticket information for UFC 242 via UFC.com/ufc-242-abu-dhabi-RYI

As a demonstration of its commitment to its fans in the Middle East, UFC announced earlier this month that it had chosen Abu Dhabi Media as its new long-term broadcast partner in the region.  The agreement grants Abu Dhabi Media the exclusive multimedia rights to show all UFC content in the MENA region, including all live events, pre and post-event programming, and all original UFC programming.  The partnership launched with UFCâ 236: HOLLOWAY vs. POIRIER 2, which was broadcast live on Abu Dhabi Sports 4 on April 14 and included two five-round championship bouts that many fights fans are already considering instant classics: Max Holloway vs. Dustin Poirier for the interim lightweight title and Kelvin Gastelum vs. Israel Adesnya for the interim middleweight title.