168 Presser and Bonus and Recap

Read on for news and notes from the UFC 168 post-fight press conference... 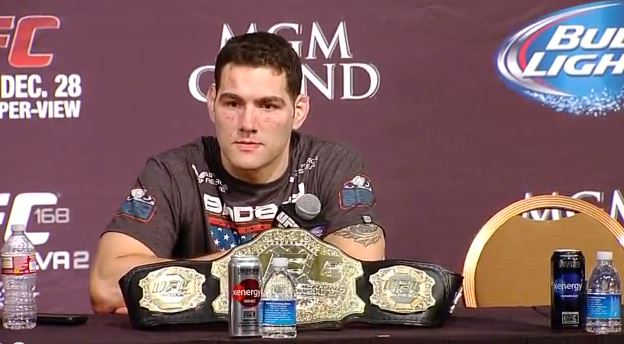 Bantamweights Ronda Rousey and Miesha Tate took home Fight of the Night honors, and Rousey also earned an extra check for Submission of the Night for her third-round finish. Heavyweight Travis Browne won Knockout of the Night after using elbows to knock out Josh Barnett in a minute flat.

Other announcements and exchanges of note:

-Rousey will next headline UFC 170 against fellow Olympic medalist Sara McMann. That event takes place February 22 in Las Vegas; Rashad Evans vs. Daniel Cormier -- originally announced as the headliner -- will now be featured in the co-main event.

-Former champion Anderson Silva was transported to the hospital to undergo immediate surgery on his leg, which snapped in the main event when Weidman checked a kick.

-White praised Strikeforce import Bobby Voelker for taking on all comers -- including a short-notice fight over the summer against current welterweight title contender Robbie Lawler -- and always moving forward. "He's 0-3 right now [in the UFC], he's not going anywhere," said White. "We don't cut guys like that."

-UFC middleweight contender Vitor Belfort also attended the press conference -- in the crowd. He took the microphone to thank Weidman for accepting his challenge to compete for the middleweight belt.

-Rousey, Hall and Browne got giggly during a tangent-turned-tawdry involving exercise equipment in Rousey's home.