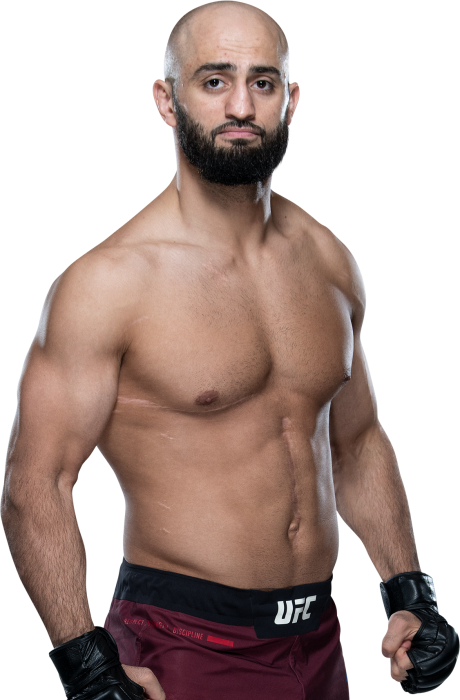 TRAINING: Two hard training sessions a day. I always think that my training partners are trying to kill me

Thoughts on opponent, Jordan Johnson? I don’t know much about him. The only thing that I do know is that he is a former wrestler. But I respect any man courageous enough to step into the Octagon. On September 15, we will do our job and that is it.

When and why did you start training for fighting? I’ve been around fighting my whole life. I have fighter’s blood in my DNA.

What ranks and titles have you held? My roots are in Judo. I accomplished a lot in Judo. I missed the Olympic Games but I will compensate for that by getting the UFC belt.

Do you have any heroes? My father is my hero.

What does it mean for you to fight in the UFC? I’m a tough fighter and I want to fight the best. UFC has the best fighters in the world. I want no easy road to prove that I’m the best one in my division.

Did you go to college and if so what degree did you earn? I have two higher education degrees. In 2011, I graduated from the Institute of Finance and Law with a degree in finance and credit (economist) in Makhachkala. In 2013, I received a diploma in Kursk Federal State Institution of Higher Professional Education South-Western State University, majoring in Industrial and Civil Engineering (engineer).

What was your job before you started fighting? I’m a businessman. Fighting I do for pleasure and it’s a calling that I have.

Specific accomplishments in amateur competition? I don’t like talking about the past, but about what I will achieve today and tomorrow. The rest are just memories.....

Specific accomplishments in pro competition? Like I said, what is done is done. Let history keep the records. I’m anxious for today.

Ranks in any martial arts styles: I’m a mixed martial artist. I’m a modern warrior. We have to be well-rounded in every aspect of the game.

Favorite Striking technique: Whatever knocks my opponent down