Nothing causes greater debate and turmoil in the mixed martial arts world than discussions about all-time greats and pantheon-level fights because they’re subjective arguments without any real clear way of coming to a final answer.

What you think is the best fight of all-time or who the top welterweight in UFC history is can be different than the next three people you talk to, and in each of those cases, those folks will likely be steadfast in their position and potentially ready to argue with you until you’re out of breath.

That’s what makes the fact that most people would agree that the UFC 248 strawweight title clash between Zhang Weili and Joanna Jedrzejczyk is the best fight between female competitors in UFC history such a staggering achievement.

Fight fans rarely agree on anything, but the overwhelming majority agrees on this, and as we ready for the former champions to square off for a second time this weekend at UFC 275 in Singapore, it’s time to dissect and discuss what made it such an unforgettable and captivating contest.

Championship fights just have a different feel to them and the UFC strawweight title was on the line in this one, but it was more than that.

This was Zhang’s first title defense after blitzing Jessica Andrade to win the title in 42 seconds six months earlier. In the eyes of some, she was an unexpected champion who burst on the scene and emerged at the top of the division before some were familiar with her exploits, and getting there the way she did only made her more of an intriguing new titleholder.

Zhang’s win over Andrade was her 20th consecutive victory after losing the opening bout of her professional career, and when she told fans to remember her following the win, it made her follow-up appearance a highly anticipated contest regardless of the opponent. But then when you factor in that it was Jedrzejczyk standing across from her, the intrigue was ratcheted up even more.

The Polish superstar became a fan favorite during her stay atop the division, bewitching media by telling them to simply call her “Joanna Champion” rather than learning how to pronounce her challenging last name when she was a challenger for the title before successfully defending the title five times. Along the way, Jedrzejczyk established herself as the top fighter in the brief history of the division, turning in dominant victories combining technique, tenacity, and charisma.

Though she’d been unseated and failed in her bid to claim flyweight gold in a clash with Valentina Shevchenko at UFC 231, Jedrzejczyk had won each of her last two strawweight appearances to re-establish herself as the No. 1 contender, and the pairing of the new champion versus the former champion upped the ante on the UFC 248 co-main event.

On paper, this was expected to be a standup battle pitting Zhang’s power and physical strength against Jedrzejczyk’s more technical, volume-based approach, with the understanding that the two women would most likely meet in the center and trade blows for the majority of the contest. 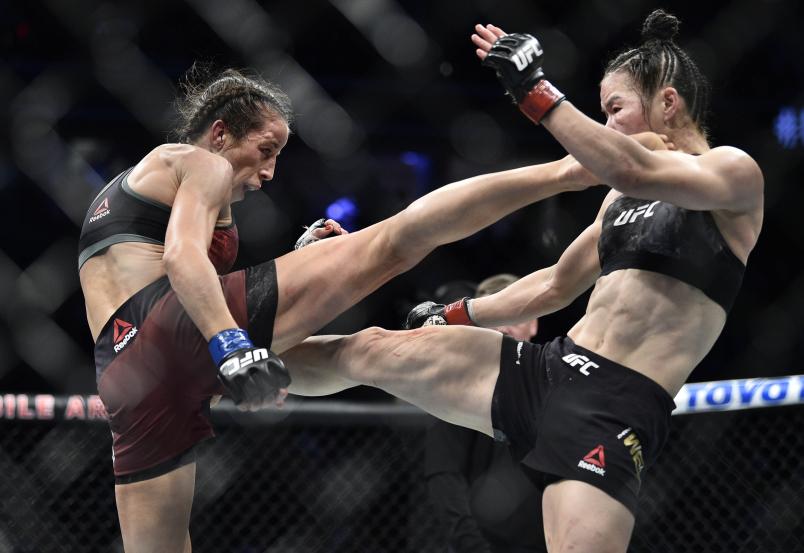 As much as plenty of people can appreciate a good chess match between fighters with divergent styles or two grapplers engaging in an ongoing series of attacks and defenses on the canvas, nothing gets fans, media, and fighters alike more excited than a good old-fashioned donnybrook, and that’s pretty much how everyone saw this one playing out.

Sure, Zhang could potentially wrestle, but Jedrzejczyk had always exhibited excellent takedown defense and an ability to draw opponents into striking exchanges, whether they wanted to or not.

And it’s not like the former champion was lacking for confidence because of her recent uneven results either: she probably still contends that she deserved the nod in her second fight with Rose Namajunas, felt she did well in her bout with Shevchenko, and had handled her last two opponents in the 115-pound weight class, so she wasn’t exactly walking in there thinking she was outgunned. 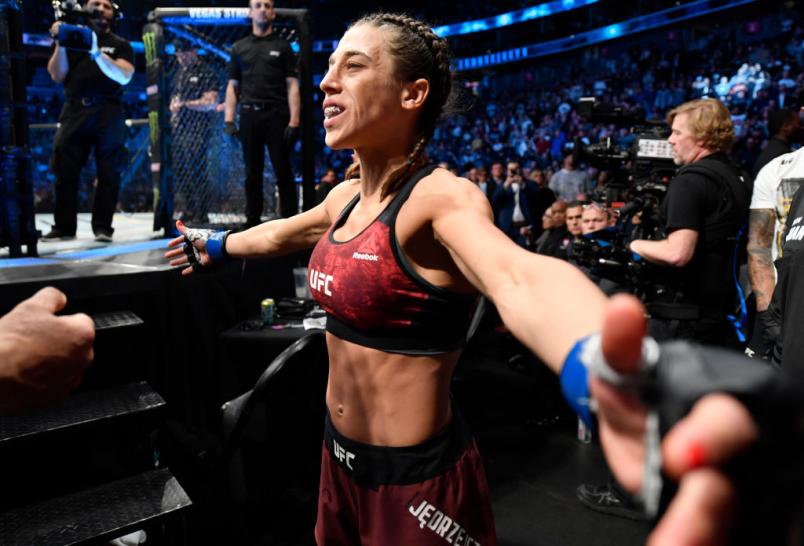 Joanna Jedrzejczyk of Poland prepares to fight Zhang Weili of China in their UFC strawweight championship fight during the UFC 248 event at T-Mobile Arena on March 07, 2020 in Las Vegas, Nevada. (Photo by Jeff Bottari/Zuffa LLC)

Plus, the champion was coming off a 42-second victory over Andrade, a diminutive dynamo who had won the title by scooping Namajunas into the air and slamming her to the canvas just a few months earlier. She’d proven herself to be a physically imposing presence in claiming the strawweight belt and now she was set to face someone that was likely to meet her in the center of the Octagon and trade shots with her.

Both women loved the stylistic matchup, and everyone else was enamored with it as well.

All Gas, No Brake

Jedrzejczyk landed two real clean right hands in the second minute of the fight that drew audible “ooohs” from the crowd and was fighting with a smile on her face early in the contest, despite Zhang happily meeting her in the middle and answering with heavy swings of her own that just missed the mark early.

Zhang began showing signs of swelling under her right eye midway through the opening stanza, but she also started to find her rhythm, reddening the bridge of Jedrzejczyk’s nose and working to wrestle the momentum away from the challenger while meeting her on her terms. 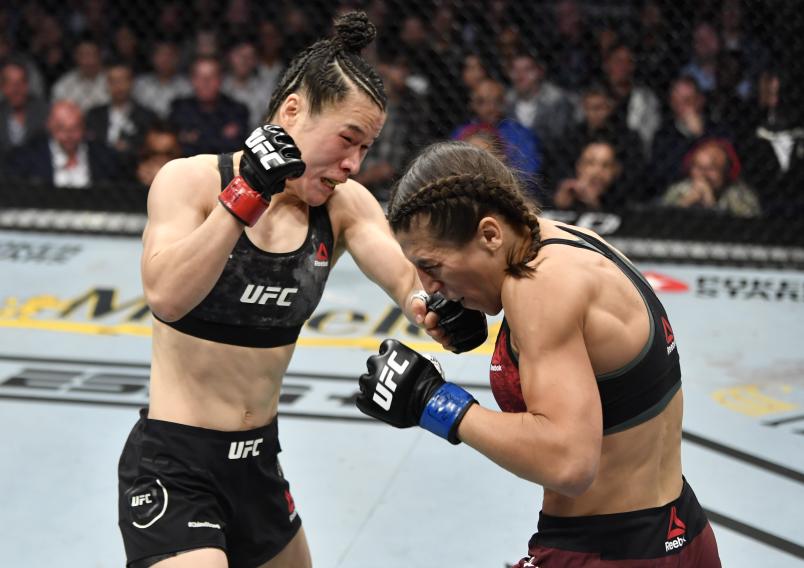 The first five minutes were a close, tense back-and-forth, ending with Jedrzjeczyk landing a late blow after the horn, adding just a little bit more tension to the proceedings, and it only got better from there.

This was a 25-minute technical brawl — two elite competitors spending five rounds trading blows but exhibiting sharp technique and a diversity of attacks; neither backing down at any point, regardless of the punishing blows that crashed home and the visible damage each woman incurred.

The only round in the fight that was scored unanimously in one fighter’s favor was the third, which all three judges awarded to Jedrzejczyk 10-9, with the challenger taking the fight to the champion throughout following a sharp close to the second.

But each of the other four rounds featured 2-1 splits from the three officials, and d’you know what? It’s hard to argue against it.

Outside of the middle frame, which was clearly Jedrzejczyk’s, each of the remaining four rounds were tight; individual five-minute segments where the champion often landed with more significant immediate impact and power, while the challenger was more precise and working at a higher clip, with each woman showing clear signs of being in a hellacious encounter.

The best fights are the ones that feel like they hang in the balance heading into the final round, with the fighters approaching it with the same sense of urgency, and this was one of those instances. Officially, the fight was deadlocked on the judges’ scorecards, with each woman winning two rounds prior to the fifth frame, but even without knowing how the tens and nines had been handed out, Zhang and Jedrzejczyk strode to the center of the Octagon at the start of the fifth round, embraced, and then continued to beat the holy hell out of one another for five more minutes.

It was tense and competitive from start to finish, with critical blows being landed in the final 30 seconds of the fight, prompting the crowd to rise to their feet and give these standouts the appreciative ovation they rightful deserved. 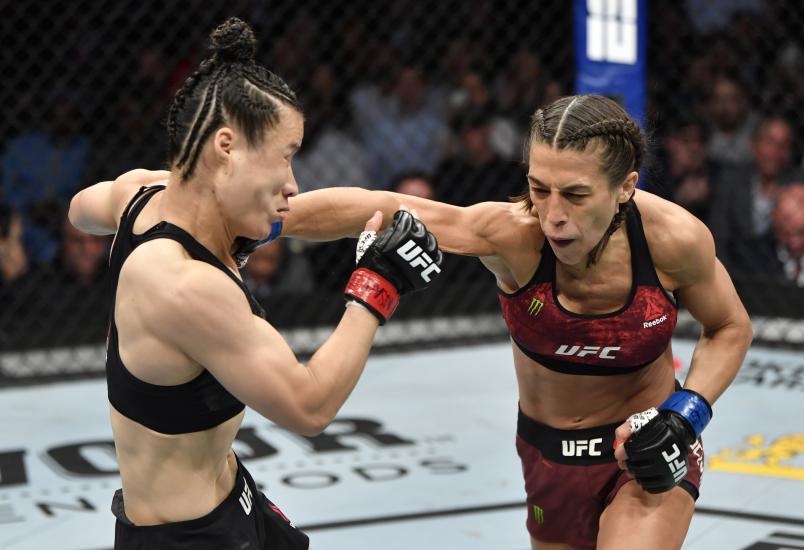 The three-man booth of Jon Anik, Joe Rogan, and Daniel Cormier added to the experience of this fight for the viewers at home, as well.

Round after round, you could hear in their voices that they knew they were witnessing something special, and it translated in the way they called the fight. As much as they detailed the key attacks and detailed what was happening in front of them, they also just laid out and let the action stand on its own for long periods, as well; the trio turned into fans privileged to be sitting so close to the action and responding the way everyone in the crowd and those watching at home likely were as each blow crashed home.

The trio were calling it a fight destined for the Hall of Fame late in the fifth round and they were not wrong — this fight will be enshrined in the Fight Wing of the UFC Hall of Fame one day and could have been inducted the instant the final horn sounded.

Immediate Desire to See It Again

Rematches can be tricky to put together at times, but even before this fight was finished, Anik & Co. were discussing the likelihood that these two women would share the Octagon together again in the future, and even before the championship rounds began, you would have been hard pressed to find someone that would have objected to seeing the sequel.

Usually after championship fights, there are contenders waiting in the wings that fans and media will lobby for as the next challenger to step into the fray, especially when a champion retains their title. But this fight was so close, so competitive, so wildly entertaining that it didn’t matter that the Zhang successfully defended her title — a sequel was always going to be welcomed.

While it didn’t come together right away and there is no longer a championship belt up for grabs, Zhang and Jedrzejczyk will finally run it back this weekend.

Expecting another instant classic is probably asking too much, but given the incredible, unmatched heights these two reached the first time they faced off against one another, anything is possible on Saturday night in Singapore.