"I think this is gonna be a great, entertaining fight for the fans"
By Thomas Gerbasi • Mar. 8, 2019

As a coach and training partner for UFC prospects Montel Jackson and Leah Letson, Zak Ottow knows a little something about what it takes to produce a fighter. But can he make anyone into a legit mixed martial arts competitor?

Ottow pauses, not wanting to hurt his inquisitor’s feelings.

“It depends on what level,” he starts before being assured that at 50 years old and with an 0-1 amateur boxing record, this scribe wasn’t applying for the job. Ottow laughs, and then gets down to the question.

“It takes a little bit of God-given talent, but mostly a lot of hard work and a lot of ability to overcome adversity,” Ottow said. “But as seen time and time again, there’s a lot of people with talent that walk through the door but then they don’t either have the work ethic or they do have the work ethic, but as soon as they hit a little obstacle or a little wall, it kind of crumbles them. And in this sport there’s a lot of setbacks, and there’s injuries, and we do happen to lose once in a while. If you can’t deal with that adversity, you get that talented kid that starts out hot at 5-0 and then he hurts his knee and then the next thing you know, it’s like prying teeth to get him in the gym because they can’t deal with adversity. So it’s those three things: just a little bit of God-given talent, a lot of ability to work hard and be coachable and an ability to deal with adversity.” 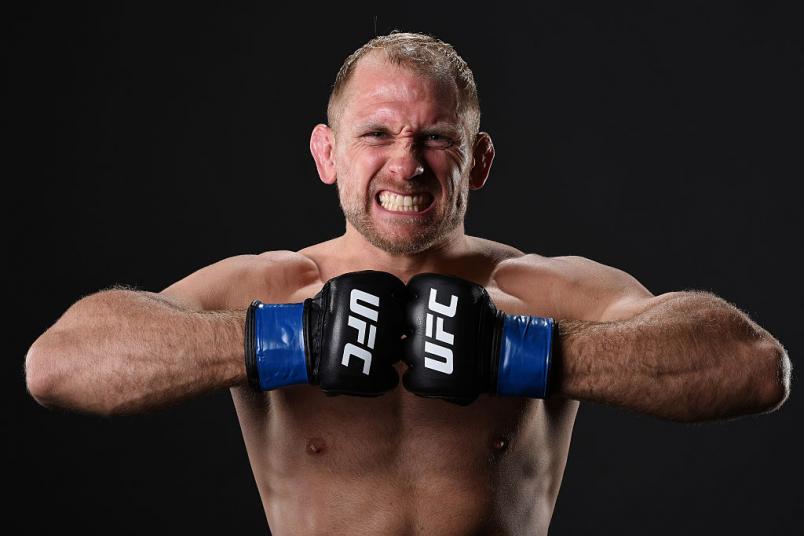 It’s precisely why Ottow is where he is right now, about to make his eighth walk to the Octagon on Saturday night against Alex Morono. At 13-3 to start his career, he obviously had talent for the sport, and his work ethic allowed him to make the transition from the college football gridiron to MMA a seamless one. So when he got the short-notice call from the UFC in 2016, he was ready for his big moment and he delivered, defeating Josh Burkman.

Then the adversity showed up, with Ottow alternating losses and wins over his last six fights. It’s been a frustrating run, with a blistering knockout of Mike Pyle followed by a knockout loss to Sage Northcutt epitomizing the highs and lows. But when he took another short-notice assignment, this one at home in Milwaukee in December, a win over Dwight Grant may have been the signal that the tide was turning. And hey, he got to enjoy his 32nd birthday and the holidays as well after upping his record to 17-6.

“It was good timing because it was right before my birthday and the holidays, so I didn’t know when that next fight was gonna be,” he said. “I thought I was probably gonna get the phone call that was gonna put me into a training camp and I was gonna have to miss out on the holidays, but it was a short notice phone call to take that fight. Of course, fighting in my hometown is a bucket list thing for me, so I didn’t really care who the opponent was, I was gonna say yes. It was a pretty tough matchup for me, stylistically. He brought a lot to the table, but getting the win in the hometown it was nice to get that done with and out of the way.”

Ottow now has a fresh start to kick off 2019, and he gets it against an opponent he’s wanted to face in Texas’ Morono.

“I don’t know who called out who first, but once one of us did, the other person was like, ‘Yeah, I want that fight too,’” Ottow said. “So any time there was an opportunity for one of us to make a call after a win, he was calling me out for a little bit and I was calling him out. I’ve known his name for a while, we both fought for Legacy on the regional level and he’s always a guy I thought I’d come across one day. And the way our careers have gone in the UFC, it makes sense on paper, the matchmakers listened and here we are fighting each other. For me, it’s nothing personal, I really don’t know the guy, but I think it’s a good matchup on paper and one the fans are gonna enjoy.”

All the signs are there for a Fight of the Night candidate, and that’s also a factor in Ottow wanting the fight. Sure, there have been flashes of the kind of fights he wants to deliver but, as he explains, sometimes you have to win now and look good later.

“It takes two to have a great fight and sometimes when you’re dealing with a certain style, you may have to slow the fight down or take it certain places that may not be as entertaining in order to get the win,” he said. “But I think this is gonna be a great, entertaining fight for the fans and a chance for me to get a finish.”

It’s the curse of combat sports. If a football team wins 9-6 on three field goals, no one complains. If a baseball team wins a 1-0 pitchers’ duel, it’s celebrated. In boxing or MMA, if a fighter isn’t going guns blazing 24/7, the fans often revolt. That’s tough on a fighter, because winning means doubling the paycheck and getting more opportunities, while a loss can be catastrophic.

“If a team wins the Super Bowl because they had a great defense, people still show up because their team is winning and they’re proud of that,” Ottow said. “But, for some reason, in MMA, it’s not only if you’re winning; you also have to win impressively and in a way that’s entertaining for the fans. But the best you can do is the best you can do in the moment. There are gonna be some fights that you’ve just got to win, no matter how it’s done. Even the most entertaining people have had those fights. Anderson Silva has had those fights that maybe weren’t as entertaining at times. But the good thing about MMA is that I think the fans have a short memory and as soon as you put on a good performance that is entertaining, they seem to forget about the other fights that maybe weren’t so much. So here I am, I have the opportunity to put on a great, entertaining fight and I’m excited to do that for the fans.”

An opportunity is all Ottow has ever wanted. Now it’s time to take advantage of it.