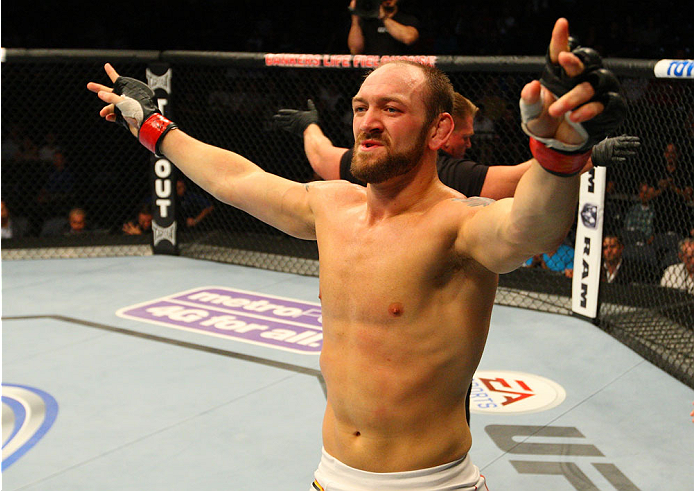 (Ed Note - Cummings did not make weight for his fight with Alberto Mina, and the bout was pulled from the card)
You have to wonder how Zak Cummings will assess 2013 when he looks back at it twenty years from now. But for now, he’ll simply call it “one of the most emotional rollercoaster years,” and that may be understating matters.

A member of The Ultimate Fighter season 17 cast, the 29-year-old Cummings finally got the chance at the big time he had been fighting for since turning pro in 2007, and even though he was eliminated from the competition by Dylan Andrews after winning his first TUF fight against Nik Fekete, life was good.

“The show aired, that was absolutely amazing, and I got a lot of great exposure,” he said. “Of course I lost while I was in the house by a majority decision, so being at a viewing and seeing all my friends and family see me lose, that was kind of terrible, but I was excited to let them know that I did get signed with the UFC. So dreams came true.”

Actually, it was a dream deferred, as Cummings tore his hamstring and wasn’t able to fight on last April’s TUF 17 finale card.

“That really bothered me, and I thought I lost my opportunity,” said Cummings, but he would not only get his shot in August against Benny Alloway, but he made the most of it, earning Submission of the Night honors in his UFC debut.

It should have been the happiest moment of his life, and it was, but once the fight was over, his family let him know that his father, who had been battling lung cancer, was rushed to the hospital and put on a ventilator the night of the weigh ins. To keep Cummings from being distracted before the fight, his family kept the news from him, but now that he knew, the euphoria from his win faded fast.

“It went from the greatest night of my life to such terrible news,” he said.

Doctors tried to take Michael Cummings off the ventilator a couple times, but he was unable to keep breathing on his own. Yet when his son arrived at the hospital, he woke up.

“He got to watch my fight, hear about it and how my dream just came true,” said Zak, and for the next seven weeks, the son became his father’s caretaker until Michael passed away at the age of 62. He had survived five heart surgeries and a kidney transplant over the years before the cancer took him, but along the way he gave his son a fighting spirit like no other. And thankfully, he got to see his son reach the heights of the mixed martial arts world. That alone was a gift.

“It gave me a lot of closure,” said Cummings. “I don’t have kids yet, but I figure that once I have that family, my life goal is to help assist my kids live their dreams out. So before he passed away, he got to see my dreams come true. It completed the circle. To finally make it to this point was a huge deal, and getting a win and a finish, it was very satisfying and made things a lot easier. I could see how much he glowed afterwards. He showed every nurse and he was so proud of me. It was a great note to go out on.”

And a fitting close to the first chapter of Cummings’ career. The second one begins this Saturday against Alberto Mina in Macao, China. It’s the Kansas City product’s second bout at 170 pounds, and after his great showing against Alloway, he expects that he’ll be staying around a while.

“I’m pretty sure it’s home,” he said. “The weight’s coming down and I’m really liking my chances here with the welterweight division.

“I actually think the welterweight division is a lot deeper and a lot tougher, and a lot of people thought I was crazy for wanting to drop a weight class,” Cummings continues. “The top guys are absolutely amazing at 185, but I really don’t think it’s as deep as a weight class. I’m looking at it like I’m going to perform better and I’m going to be the best me possible at 170. And I think I can compete with anybody in the world in my weight class. Am I gonna destroy everybody in the world? No, but I deserve to be there and compete with anybody. I know I’m that good.”

This weekend he gets to prove it against the unbeaten but unproven Mina, who makes his UFC debut after building a solid reputation on the local circuit.

“He’s one of those guys where I’m not sure how good he really is,” said Cummings. “He’s 10-0 and he’s finished everybody, so on paper, he looks dangerous. He’s a jiu-jitsu and judo black belt, and the guy sounds very dangerous and he’s proven to be so. But you try to dig into it, and I really don’t think that he’s fought that tough competition, and I know that he’s not fought near the competition that I have and not near the competition that I am personally. So it’s kind of hard to gauge him, but I think I’ve got a good idea of where we’re at with him.”

So where does Zak Cummings see himself at? Has the idea of being a UFC fighter sunk in yet?

“It’s still getting there,” he laughs. “I’m still working on it.”