Zak Cummings: Laughing at the Odds 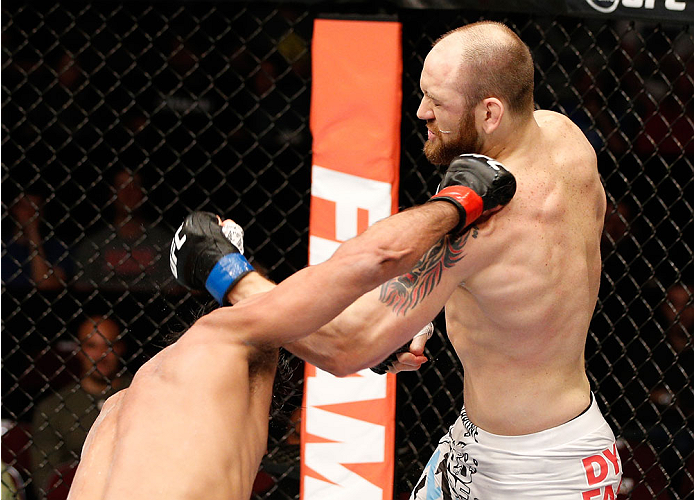 At least when it concerns him being a 5 to 1 underdog to a fellow Ultimate Fighter alum who was also making only his second Octagon appearance. Add to that, Cummings’ UFC debut was a Submission of the Night win by way of a very slick first-round D’arce choke. Nevertheless, at UFC Fight Night: Brown vs. Silva, Cummings found out the bad news at the last possible moment that oddsmakers had little to no faith in him that evening against Yan Cabral, and he couldn’t have cared any less.

“I laughed when I saw the odds come out,” reveals Cummings. “I knew I was the underdog, but I didn’t realize how stacked it was until he was actually entering the cage and I looked up at the screen and saw the odds (laughs). I started laughing in the cage when I saw them. I was like, ‘Whatever. We’ll see.’”

The 29-year-old, originally from Irving, Texas, was full of confidence heading into a clash with Nova Uniao’s highly-regarded BJJ black belt Cabral. Sure, Cabral was an accomplished grappler with an undefeated pro MMA record that saw him score 10 of his 11 wins by submission, but Cummings is a game fighter who had competed at a high level one and two weight classes above 170 pounds and owned nine of his 16 career wins by submission. Maybe they didn’t see it, but Cummings knew what he was capable of, especially after tasting Cabral’s best in the first round, and he went out there and proved the oddsmakers dead wrong.

“It pretty much went how I thought it would,” tells Cummings. “I knew he was going to come out and try to take me down and put me on my back. He was able to in the first round. He wanted no part of my standup. After he felt my power, he shot over and over again. It started wearing him down and he was mentally breaking and I just took control of the fight. I didn’t really feel in danger in the first round. He had a fully locked down triangle and couldn’t finish me with it. He ended up on top and somewhat had a mount position when I was against the fence, but I never really felt in danger. Even though he was in a normally dominant position, I didn’t feel in danger at all. That gave me a huge confidence boost.”

Cabral took the opening five minutes on the scorecards, but the next 10 belonged squarely in Cummings’ hands. “We came out for the second round, he threw that head kick that I caught and I chucked him off to the side - that kind of set the pace for the rest of the fight,” remembers Cummings, who would go on to score three takedowns and land four times as many significant strikes in the remainder of his unanimous decision win.”I just didn’t think he had fought anybody that had the grind and the wrestling that I have. I was really a bad matchup for him.”

In his two Octagon appearances / wins since his stint on TUF 17, Cummings has proved that he’s a truly dangerous animal at welterweight. Previously, Cummings racked up 18 pro fights at 185 and 205 pounds, where he went 15-3. Of those defeats, two were five-round decisions, with one being to currently #15 ranked UFC light heavyweight Ryan Jimmo, and Cummings has only been finished once and that was five years ago to currently #6 ranked UFC middleweight Tim Kennedy. Now, in back-to-back 170 performances, Cummings has shown improved speed, strength, durability, and, as mentioned, sheer confidence in the cage.

“I feel amazing at this weight,” states Cummings. “I never got manhandled or ‘out-strengthed’ at 185 or at 205, but this is the weight that I really need to be competing at. I’ve known that for a while, but it’s one of those things where if you’re not losing then there wasn’t a reason to do it. Now, I’m fighting the best guys in the world and fight for the best promotion possible, so let’s take a serious run at this and do it at the right weight class. I knew I could get to 170, but I just had to make a lot of changes. I made those changes and it has meant the world to me. My speed is there and I feel very strong and powerful. I’ve got knockout power in both hands and I’m very strong when I clinch on to somebody. I finally feel like I’m at a weight class where it is all coming together for me.”

Up next, Cummings will get his biggest opportunity yet to climb the divisional ranks as he meets Gunnar Nelson in the co-main event at UFC Fight Night: McGregor vs. Brandao. The #13 ranked Nelson is coming off a highlight reel effort in London against Omari Akhmedov, where the Icelandic wunderkind scored a Performance of the Night bonus with his first-round guillotine choke victory. The 25-year-old Renzo Gracie BJJ black belt is unbeaten as an MMA pro in 13 bouts and he owns three wins inside the Octagon. With the clash set in Dublin, Nelson will no doubt have the crowd’s support as he trains under coach John Kavanagh at SBG Ireland.

“The last time I watched him fight I thought he was impressive,” admits Cummings. “Actually, my mom called me and was like, ‘That guy’s pretty good.’ I know Gunnar is a more dangerous fighter than Cabral was MMA-wise, but I feel like they’re very similar guys. Gunnar’s striking is very different with that unorthodox, karate style, but he’s a grappler at heart. He’s a very good grappler like Cabral and he’s going to try and take this fight to the ground and put me on my back. I really feel like it’s going to be very similar to the last fight stylistically. I’ve prepared for a war, I’ve prepared for a Fight of the Night. I hope he has too.”

In preparation for Nelson, Cummings has been busy training under the watchful eye of coach Deryck Ripley at Glory MMA & Fitness in Lee’s Summit, Missouri. A resident of “The Show-Me State” since he was three years old, Cummings’ small Midwestern gym boasts two more UFC rising talents besides himself in lightweight James Krause and #11 ranked flyweight Tim Elliott. For strength & conditioning, Cummings works with Brian Wilkerson at River Market Crossfit and is an avid swimmer. In charge of keeping him upright is his chiropractor Renny Russell, as Cummings jokes, “If I didn’t have him my body would be falling apart (laughs).”

Obviously, Cummings’ ground game was tested against Cabral in his last outing and, most likely, will be tested again by Nelson. As mentioned, Cummings is a BJJ brown belt, and before that he wrestled from sixth grade through junior college. Nowadays, Cummings’ ground talents are being honed by one of the best in Wendell Alexander (co-founder of Nova Uniao) BJJ black belt Leo Pecanha. When asked why he can excel on the ground against someone like Cabral or Nelson, Cummings answered, “I’m not going in there to put on a gi and put on a sports jiu-jitsu match with these guys - it’s a fight and that’s something I do pretty well.

“I think I do a very good job remembering that I’m in an MMA fight and not in a jiu-jitsu match when I hit the ground,” continues Cummings. “A lot of these guys, these top level jiu-jitsu guys, they strike and strike and then when they hit the ground they pretty much go straight jiu-jitsu. I do a very good job of mixing in my punches and wrestling and my scrambles along with my jiu-jitsu game. I know that helped me out a lot in my last fight. If we had just done a straight jiu-jitsu match, who knows what would have happened. But I was able to hit him in the face with a couple of punches and he was letting go of all kinds of submission attempts. He went for a kneebar and I landed a couple of hard shots with my left hand and he let go immediately and that’s how I took his back.”

This Saturday in Ireland’s capital city, Cummings will collide with Nelson for a co-main event scrap with Fight of the Night written all over it. “When you have two guys who don’t want to play the point system - they want to choke the other guy out or knock him out - it makes for an exciting fight,” asserts Cummings, who is ready to take out the favorite once again with a smile on his face. “I know I’m going to come in as the underdog and I’ll be laughing at it again. I know where my skill set is and I know I can compete with these guys and I know I can compete with the best guys in the world and Gunnar’s one of them. But it’s my time to prove to everybody else that I’m one of those guys too.”