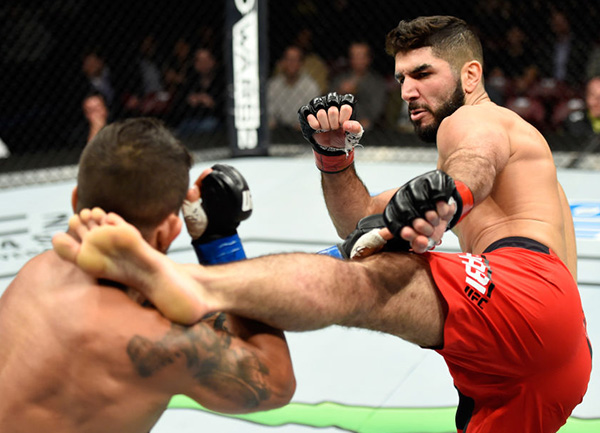 Returning former welterweight kingpin Georges St-Pierre caps off the night with his bid to claim the middleweight title, Joseph Duffy wraps up the televised preliminary card with a lightweight showdown against James Vick and Aiemann Zahabi kicks off the festivities in a battle of bantamweight hopefuls with Ricardo Ramos.

“It’s pretty amazing,” said Zahabi, who enters the UFC 217 opener with designs on keeping his unblemished professional record intact. “If we all come away with wins and we get the clean sweep, it’s going to be a great story.”

It’s a pretty interesting angle and unique experience even before the triumvirate of talented competitors hit the cage, as each member of the trio has taken a different path to being part of the Tristar family.

St-Pierre, of course, is one of the gym’s founding members; the former titleholder who helped put the gym on the map and has remained permanently linked to the team even throughout his four-year hiatus from competition.

Duffy is a transplant, one of the first fighters from Ireland to venture to Montreal in search of a broader collection of coaches and training partners to work with who ended up liking the fit so much that he moved to the historic cosmopolitan city permanently.

And Zahabi is one of the gym’s homegrown talents; the younger brother of the team’s legendary head coach Firas Zahabi who has developed as a coach and competitor on the mats inside the third-floor gym with red stars in the windows tucked down a non-descript road not far from the Gibeau Orange Julep restaurant.

“It’s pretty incredible,” Zahabi said of sharing this experience with his two teammates. “I’ve always looked up to Georges – I’ve known him for a long time and I’ve always wanted to fight on the same card as him so I could say, ‘Georges is in the UFC and I’m in the UFC; we’re the same.’

“Obviously we’re not the same-same because he’s fighting for another world title to become the champ-champ like McGregor, but it’s nice that I finally reached the UFC before he retired and I’m really happy that I get to share a card with him.

“And me and Joe Duffy have gotten super-close,” he added. “I would have him in my corner, but because he’s fighting, we can’t be in each other’s corner. But training camp was amazing because we’d be able to feed off each other’s positive energy, so it was nice to be there for each other in that sense. It just pushed our bond even closer.”

While he’s excited to compete on the massive Pay-Per-View return to Madison Square Garden alongside St-Pierre and Duffy and as part of one of the best fight cards of the year, competing in early November wasn’t what Zahabi expected and it led to the unbeaten 29-year-old bantamweight to clear some major life milestones in the midst of training camp.

After emerging victorious over Reginaldo Vieira in his promotion debut in February, Zahabi expected to fight again in July or September. He shared that proposed timeline with the UFC matchmakers and scheduled his life accordingly, including planning his wedding in late October.

“I had booked the wedding before they asked me to fight because I was expecting to fight in July or September, so my wife put the wedding in October,” laughed Zahabi, who married his long-time girlfriend Sylva on October 21. “So we put it in October and I didn’t get a call for July and I didn’t get a call for September and then I got an email – ‘You’re fighting in November at Madison Square Garden’ and I was like, ‘Well, I’m taking it; it’s a pretty nice card.’”

In addition to tying the knot, the couple also purchased their first home, so it’s been a busy few weeks for the newlyweds and there are a few more major events on Zahabi’s calendar before the year is complete – namely this weekend’s showdown with Ramos and his 30th birthday on November 19.

Despite the hectic schedule and major life milestones, Zahabi feels well prepared for his sophomore appearance in the Octagon and ready for what the talented 22-year-old Brazilian brings to the table.

“He has great submission attacks,” he said of Ramos, who collected a unanimous decision win over Michinori Tanaka back in February. “He’s very good offensively when he’s on top, his ground-and-pound is nice as well – but I’m wondering how strong his grappling defense is.

“That’s something we can put to the test. He’s lost that way before and we’ll see what his striking is like too; we’ll see how comfortable he is on the feet because I’ve noticed that he likes to shoot a lot.

More importantly, he’s secure with life as a whole.

Although this is just his second appearance in the UFC and his eighth professional appearance overall, the skilled and cerebral Zahabi has worked long and hard in the shadows, coaching in the gym, cornering fighters and building a foundation for himself and his budding family so that the ebbs and flows of his career in the cage do not define how he’s able to live his life outside of it.

“That’s the one thing I’m happiest with is that I don’t need to win this fight to buy myself a house or get married. I’m secure in my life outside of fighting. Fighting means a lot to me, but I’m happy that my life has been set up that way.

“I feel like I’ve done everything I can to win,” he added. “It’s possible. It’s within my grasp. I could get a knockout. I could get a submission. I could win a decision. It’s all in the realm of possibilities. There is also a chance I could lose, but I don’t need the win; it doesn’t define who I am and I’m happy to be in this space.”