Zahabi Is Ready To Be Back In The Octagon

After An 18-Month Layoff Between Fights, Aiemann Zahabi Is Excited To Finally Be Fighting Again
By E. Spencer Kyte • Apr. 29, 2019

Aiemann Zahabi has spent the last year preparing for this weekend.

Out of action since suffering the first loss of his professional career against Ricardo Ramos at UFC 217 in November 2017, the Montreal-based bantamweight ends an 18-month stretch without an appearance on Saturday night in Ottawa when he squares off with Vince Morales in a preliminary card pairing at Canadian Tire Centre.

Taking an extended hiatus wasn’t planned. In fact, each time a Canadian card came up, Zahabi reached out to UFC matchmaker Sean Shelby about competing, but there was never room for him right out of the gate. Short-notice opportunities arose, but between wanting to be home with his newborn twin daughters Aaliyah and Mila and putting himself in a position to shine after landing on the business end of a blistering knockout in his last outing, the 31-year-old bantamweight turned them all down.

“Two weeks before the fight, Andre Soukhamthath’s opponent got hurt and they called me,” Zahabi said, detailing one of the short-notice opportunities that came his way during his absence. “I could make the weight, but I was coming off a KO loss and I didn’t want to lose in case the weight affected my performance. 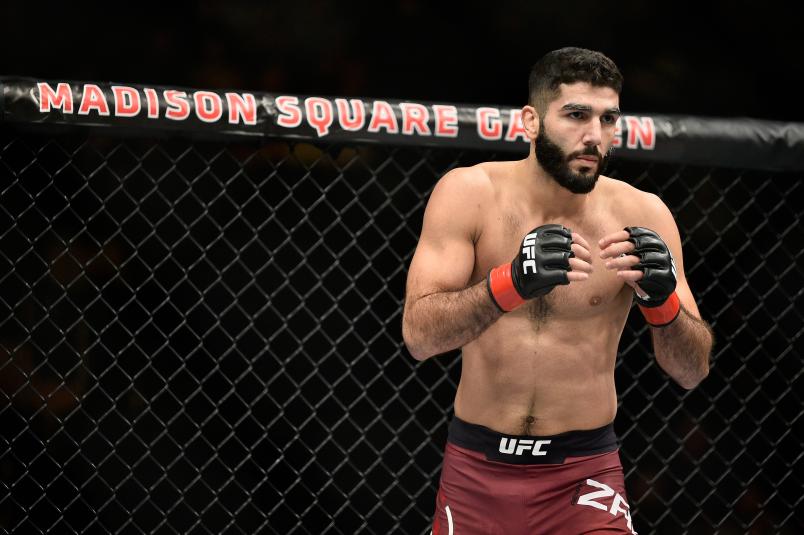 NEW YORK, NY - NOVEMBER 04: Aiemann Zahabi of Canada prepares to fight against Ricardo Ramos of Brazil prior to their bantamweight bout during the UFC 217 event at Madison Square Garden on November 4, 2017 in New York City. (Photo by Jeff Bottari/Zuffa LL

“It was a tough call to make, but my brother said, ‘Look, the next fight, you’re coming off a loss, so we want to put on a show. We want to have a big win. We don’t want to risk a weight cut affecting your performance.’

“So I turned that last minute fight down too. Then I was really trying hard to push for December, but it was full too, so I didn’t get a spot on that card. But now I’m on this one, so it is what it is.”

In addition to being a proud new father and spending time with his family, Zahabi has used his time away to commit to improving every facet of his game in advance of his return.

“The fact that I didn’t fight for 18 months is a blessing in many ways, which is why I’m not upset about it taking this long,” he said. “I’m not angry that it took me this much time to get back because I put that time to good use and now I have more confidence going into this fight than I did the Ramos fight, even though I’m coming off a loss.

“I don’t think I looked bad,” he said, reflecting on his loss. “I didn’t perform badly. Getting knocked out is bad, but it gave me the opportunity to look inside more, be more truthful with myself, do some self-reflection and patch as many holes in my game as possible.” 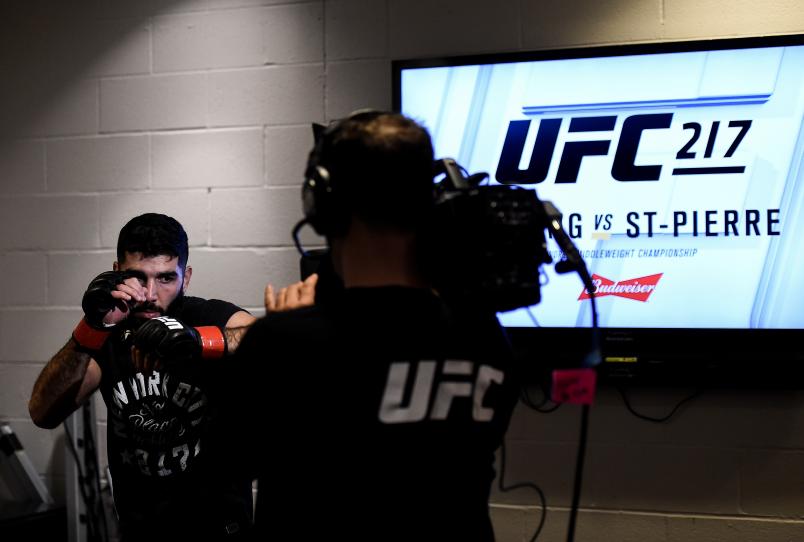 As simple and obvious as it sounds, Zahabi committed himself to getting at fighting, putting a specific focus on strengthening his grappling skills.

“That fight with Ramos, I felt I was just missing a little to be able to out-do him in the grappling,” said Zahabi, who trains under his brother, Firas, and Professor John Danaher at the Renzo Gracie Academy in New York City. “He was just a little better than me in the grappling and it really got to me. I was like, ‘This year, I’m really going to dedicate myself and I won’t fight until I’ve got that black belt.’”

Every Sunday, he would jump in the car, hit the road and crash at Nicky Ryan’s once he finally arrived in the city. On Monday, he’d get up, train two or three times with the all-star cast of grapplers in New York and then jump right back in his car and head back to Montreal, where he’d spend the rest of the work preparing for Saturday’s showdown with Morales with the elite collection of talent at Tristar.

The next Sunday, the cycle would start again. 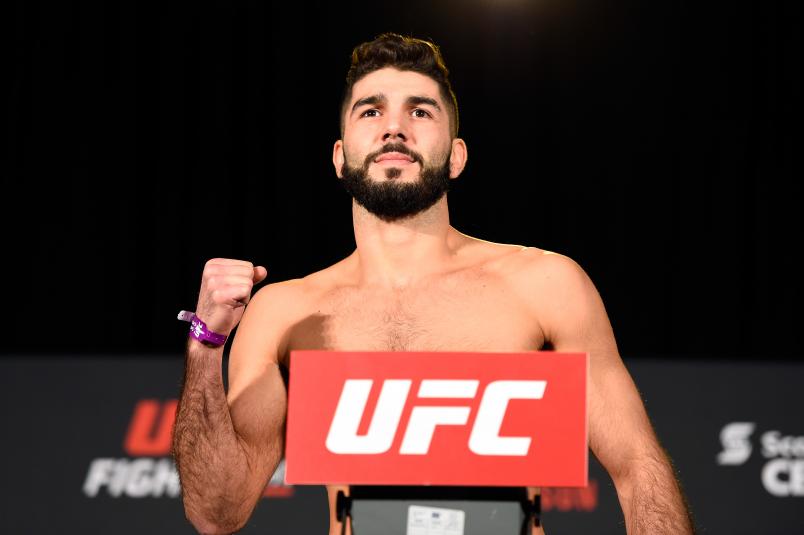 It has made for a long year of intense focus and effort, but in advance of his return this weekend, Zahabi is thrilled with the results, especially his progress in the grappling department.

“I spent a year improving everything — managing my distance better, improving my takedowns, my subs, the opportunities to ground-and-pound better,” he explained. “I worked on so many different things to just be better overall and so now, I’m looking to fight without any limitations.

“I’m more jacked than ever,” he added with a laugh. “My nutrition was on point the whole 18 months and I’ve made sure everything is good. My conditioning is through the roof, I have great stamina, and I got my black belt from John and Firas. I really earned it and I’m really happy with my jiu jitsu progress this year.”

Saturday night, Zahabi finally gets the chance to show the masses what he’s been working on for the last year when he steps in against Morales, a heavy-hitting protégé of Tony Fryklund who impressed in a losing effort on the Contender Series last summer, bounced back with a quality win and then accepted a short-notice call to take on rising star Song Yadong in Beijing.

After dropping a unanimous decision to the Chinese up-and-comer, the 28-year-old “Vendetta” will be pushing hard to have his hand raised in the UFC, but Zahabi is confident that his tireless efforts in the gym over the last year will pay dividends when he finally makes the walk to the Octagon again this weekend. 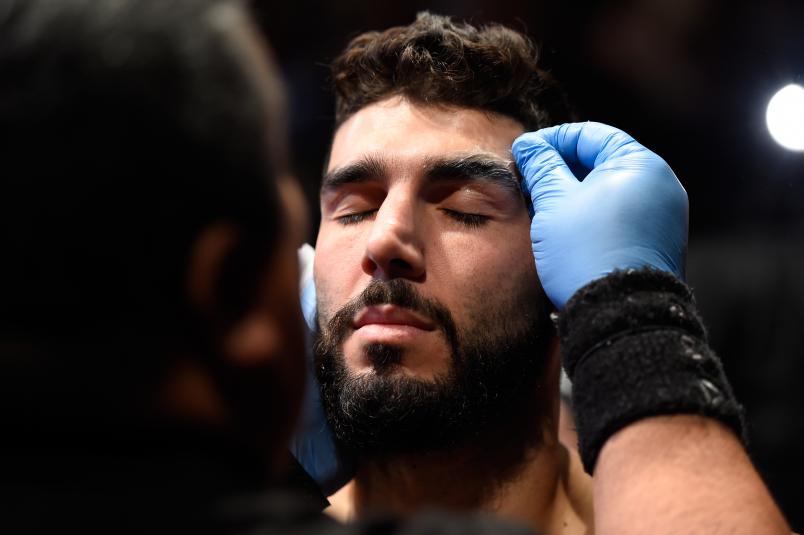 “The most obvious thing about him is that he’s got power,” he said, offering an assessment of what Morales brings to the table. “He’s dropped a lot of guys. He hasn’t knocked guys out cold with one shot, but he drops them often and you see him wobble guys, rock them, so I have to be careful with that right hand.

“He hasn’t thrown many, but I’m expecting him to throw a spinning elbow, just because of what happened to me last time. But wherever the fight goes, I’m ready to fight all the way through. I’m not afraid to go anywhere. That’s what I did this whole year.

“Before, I would watch tape and study, try to learn the guy by heart, but now, I watch tape, but I didn’t obsess over studying tape. I got so good over this last year that I’m ready for whatever this guy tries to do to me and I’m going to counter him and beat him.”

Personally, the last 18 months have brought a number of blessings and milestones for Zahabi and his family, but professionally, it has been a challenge.

But the wait is finally over and Saturday night, he’ll step back into the UFC cage, eager to deliver an impressive performance and hear Bruce Buffer declare him victorious once again.

“Everything is business until he says I win and once he says that, there is no feeling like it in the world,” he said. “That’s why I can’t stop: it’s an addiction, like a drug.

“Winning in that Octagon is a drug. Winning a fight in the Octagon is incredible and I can’t wait. I’m dying to get into the win column again.”