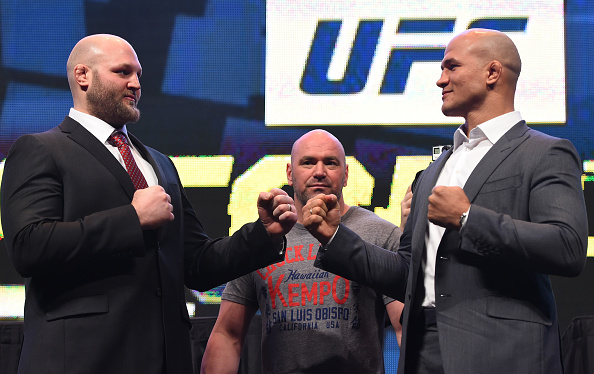 The UFC lands in Zagreb, Croatia this weekend with a card featuring two of the best heavyweights in the world at the top of the bill, as Ben Rothwell looks to take one more step towards a title shot when he takes on former champion Junior Dos Santos.

Rothwell has looked like an unstoppable freight train lately, winning four fights in a row, but Dos Santos is undoubtedly one of the best heavyweight fighters to ever compete in the UFC and he stands as a very tough test on the way to the championship.

Also on the card, submission specialist Gabriel Gonzaga will try to pick up another win inside the Octagon when he takes on one of the most fearsome fighters on the entire roster, as Derrick Lewis tries for another knockout finish in his first visit to Croatia after accepting the bout on short notice.

In today's fantasy preview, we're going to examine some of these key matchups to see who has the advantage going into Sunday's card and if there's an upset brewing between a favorite and an underdog at UFC Fight Night: Rothwell vs. Dos Santos

Ben Rothwell has been on a tear lately, earning a top five ranking while beating some very high-level heavyweights along the way. If he has designs on a title shot, however, it's going to force Rothwell to go through a former champ like Junior Dos Santos, who is still one of the best and most dangerous fighters on the roster.

There's no secret to what Dos Santos does well - he's a brutally devastating striker on the feet with great boxing and incredible kicking power. Dos Santos nearly doubles Rothwell's output on the feet, but both fighters have more than enough power to put the other away with one shot.

Where Rothwell gains an advantage in this matchup is with Dos Santos being in several wars during his UFC career, and that takes its toll. Dos Santos went through two brutal battles with Cain Velasquez before having another with Stipe Miocic and then being knocked out by Alistair Overeem in his last fight. Rothwell may not have the most technical striking game, but he only needs to land one glancing blow and the fight could be over seconds later.

Dos Santos knows this fight may be do or die for him if he ever wants to get back into title contention, but he's facing a heavyweight in Rothwell who has a ton of confidence and a lot of momentum as well. Look for Rothwell to bully Dos Santos with his power and employ a similar game plan that worked for Velasquez so well the last two times he defeated the Brazilian. If Rothwell can push Dos Santos to the cage and unload bombs from inside, he may put this fight away by knockout before he gets to the championship rounds.

Prediction: Ben Rothwell by TKO in Round 3 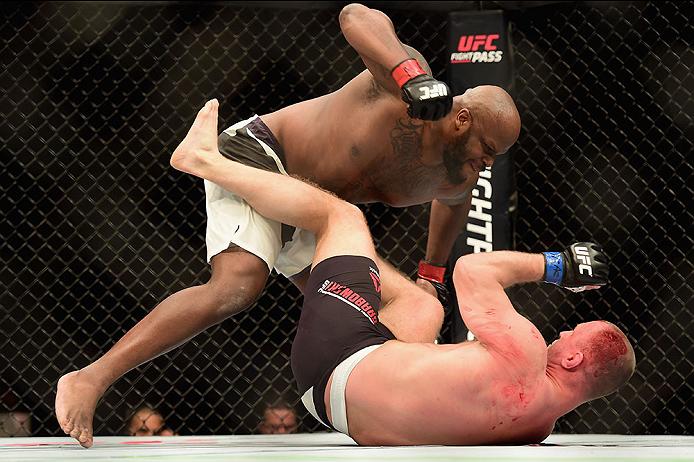 Derrick Lewis steps up on short notice to accept a fight with one of the top veterans from the heavyweight division in Gabriel Gonzaga, but he's still a comfortable favorite going into Saturday's card in Croatia. Lewis is a punishing force in any fight, but particularly those that hit the ground, where he's the person unloading shots from the top.

There may not be a more vicious ground-and-pound game in all of MMA than the one Lewis has, but he'll have to be careful in this fight, as he's taking on a world-class submission specialist in Gonzaga.
RELATED: Lewis fighter bio | KO of the Week: Lewis vs. Inocente

Gonzaga is no stranger to being an underdog during his career, but he has a ton of experience to fall back on in a fight like this. Don't forget that Gonzaga always has one-punch or one-kick knockout power on the feet and he's a master at pulling off submissions when opponents make sloppy shots from the outside and leave a neck open for his patented guillotine choke.

While it's never a perfect time for a fighter to accept a bout on short notice, Lewis really seems to be coming into his own lately and Gonzaga might be ripe for the picking. Gonzaga has a huge advantage if he's the one who lands the takedown, but given Lewis' sheer power, if he puts the Brazilian on the mat early, this fight won't live to see the second or third round.

Prediction: Derrick Lewis by TKO, Round 1

Francis Ngannou looked very impressive in his UFC debut, showing as much athleticism as we've seen in the heavyweight division lately, but Curtis Blaydes is an interesting prospect with a ton of power in his hands as well, and this could be a potential show stealer by the time the night is over.

Ngannou is a force on the feet, with power from every angle and a growing skill set that will only get better as he gets more Octagon experience. Meanwhile, Blaydes is currently 5-0 in his young career, with every fight ending by way of knockout. Blaydes is also a former college wrestler with some very dynamic takedowns in his arsenal.
RELATED: Ngannou featured in fighters on the rise in Zagreb

Blaydes is more than capable of landing a straight double leg takedown or taking his opponent for a ride with a big, powerful slam. Blaydes is punishing on the mat, and while his striking still has a long way to go before he will challenge anyone in the top 15, it bodes well for him against a fighter in Ngannou who probably wants nothing to do with the ground game in this fight.

Look for Blaydes to bide his time early before finding an opening to put Ngannou on the mat, and he may not let him back up again once he plants him there.

Prediction: Curtis Blaydes by TKO in Round 1 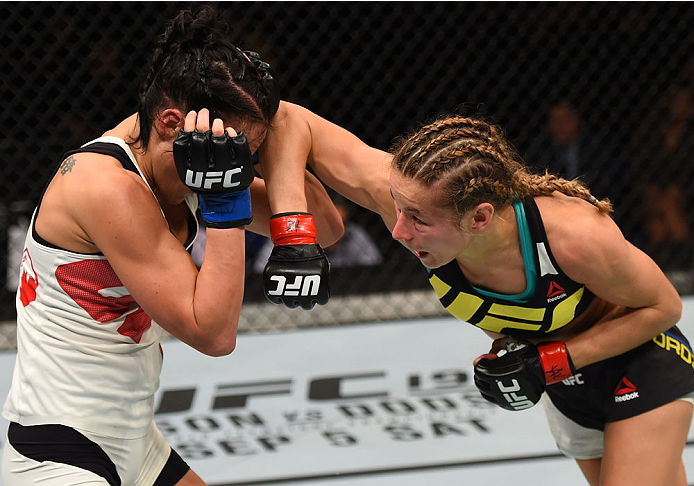 Maryna Moroz will face a fellow submission specialist in Cristina Stanciu this weekend in Croatia, but given her overall experience edge against better competition, it should equal a second win in the UFC for this Ukrainian standout.

Moroz surprised the world when she debuted in the UFC in 2015 and submitted noted striker Joanna Calderwood in the first round. She came up short in her next bout against Valerie Letourneau, but there's certainly no shame in that defeat. Moroz is a well-versed ground specialist with the armbar being her preferred finisher, and considering that Stanciu is also known for her submissions on the mat, there's a better than average chance the fight will hit the ground.

Stanciu has been very aggressive in her previous fights, and if she attacks with that kind of ferocity against Moroz, she could find herself planted on the mat with a takedown. Stanciu is capable of pulling off a submission of her own but stepping into her UFC debut against a fighter as crafty as Moroz, it's more likely that she'll be the one fending off the ground attack until it's finally too late.

Prediction: Maryna Moroz by submission in Round 2

Igor Pokrajac returns to the UFC following three wins outside the promotion to take on Jan Blachowicz, who is in desperate need of a victory after dropping his last two fights.

This should be just what the doctor ordered for Blachowicz, because while Pokrajac is experienced, he failed to impress during his previous UFC stint, where he lost four out of his last five fights before being released. Pokrajac certainly had some battles in the UFC, but despite those three recent wins, it's still hard to believe he'll tackle top competition in the Octagon again.

Blachowicz pulled off a huge win in his debut, taking out Ilir Latifi before dropping back-to-back decisions against Jimi Manuwa and Corey Anderson. Both of those fights were abysmal performances all around, so Blachowicz will certainly look to impress this weekend, and given his power and size advantage, it should end well for the Polish light heavyweight.

Prediction: Jan Blachowicz by TKO in Round 2

Damir Hadzovic seems like a solid prospect to watch for the future, but the UFC did him no favors by matching him up against a finishing machine like Mairbek Taisumov.

Taisumov is ferocious on the feet, with three consecutive knockouts to his name, and he will probably have number four when this weekend is over. Taisumov isn't so much about volume as he is accuracy and power. He hits his targets just over 44-percent of the time, and he has vicious strikes that come from every angle with fight ending power. Taisumov will give up a little bit of size to Hadzovic, who is about three inches taller, but that probably won't save him once the Russian gets inside and starts unloading combinations.

Hadzovic isn't a bad striker by any means, but he's simply overmatched by someone as accurate and deadly as Taisumov. This could be a highlight reel finish, but until it's over, expect these two strikers to duke it out until one of them falls over.

Prediction: Mairbek Taisumov by knockout in Round 2

Nicolas Dalby remains undefeated as he enters his third fight in the UFC, but he's had some close decisions along the way, including a majority draw in his last bout against Darren Till in October 2015. Dalby is a very talented prospect, but he's been unable to truly shine thus far in the UFC, and he'll have a tough test this weekend as American wrestler Zak Cummings looks to add the first loss to his spotless record.

Cummings is a physically intimidating fighter with a lot of power at 170 pounds, as well as the ability to grind out an opponent on the mat for three rounds. Cummings has faced some tough competition since joining the UFC and he's fresh off a first-round knockout in his last bout against Dominique Steele.

Dalby is a well-rounded fighter who lands over four significant strikes per minute, along with four takedowns per 15 minutes in the Octagon. The problem he'll face with someone like Cummings is his wrestling game will likely be negated by a superior grappler, and that could limit him to a one-pronged attack on the feet. Cummings is more than capable of handling himself on the feet and then mixing in takedowns to throw Dalby off his game round after round. It all adds up to a lot of ways Cummings can win and hand Dalby the first loss of his career.