Zach Makovsky: The Goal is the Belt 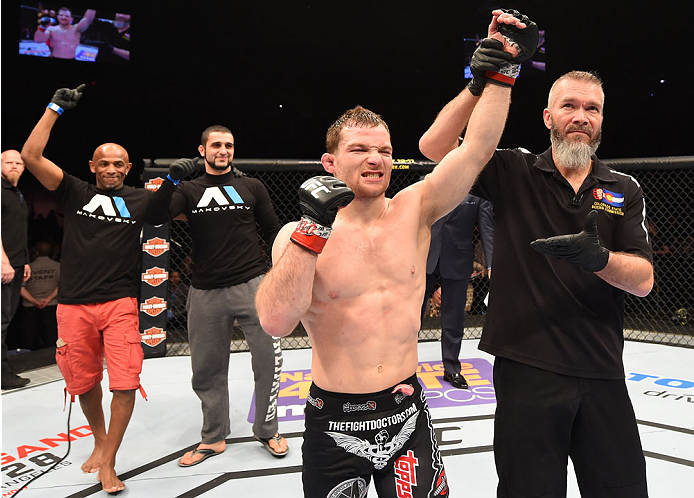 To be the man, you have to beat the man.

Specifically for Zach Makovsky, to be the UFC flyweight division’s number one-ranked contender, “Fun Size” has to beat John Dodson. And Makovsky knows his path to current UFC flyweight champion Demetrious Johnson goes through Dodson, so a future battle for the belt could very well be what’s at stake between Makovsky and Dodson at UFC 187 this Saturday.

“John Dodson is the number one-ranked contender and he gave Demetrious his most difficult fight,” Makovsky said. “He was going to fight for the title again before his injury. A win over Dodson, which no one in the UFC has done besides Demetrious, should be enough to earn that shot. I've held several titles, some that are called ‘world titles’. The thing is, everyone knows what the real world title is and that's the UFC title. That said, I've consistently reached my goals and keep setting the bar higher for myself.”

A Pennsylvania native who has fought professionally just about everywhere in the United States, Makovsky currently sits at number nine at 125 pounds. In February, he earned his third win inside the Octagon since signing with the UFC in December 2013 to take on veteran Scott Jorgensen on short notice as a replacement for an injured Dodson. This most recent unanimous decision win in Colorado at UFC Fight Night: Henderson vs. Thatch was a solid performance, with Makovsky controlling the action and scoring half a dozen takedowns on the always dangerous Tim Elliott.

“Elliott is one of the most awkward and aggressive fighters in the UFC,” Makovsky said. “He keeps the pressure on and the pace high. That, plus the altitude of Denver, meant a tough night, but I try to be ready for the hardest fifteen minutes of my life every time I step in there. Also, I feel that pressure fighters play into my strong suit as well, as I like to counter. I thought he would come forward hard and I would take him down, making him hesitate the next time he attacked, but he didn't hesitate and kept coming forward and pushing the pace. Ultimately, he walked into some takedowns, giving me what I wanted.”

At 32 years old, the former NCAA Division I wrestler from Drexel University is 3-1 inside the Octagon, with Makovsky producing at least five takedowns in each of his UFC wins. While all fighters strive to be great everywhere, Makovsky as a takedown artist and grappler are two areas where he is head and shoulders above the rest. Makovsky has shown a hair-trigger shooting for takedowns and passing his opponent’s guard, but admits he has been a bit gun-shy going for submissions. It’s an area the BJJ purple belt has been working on diligently at Martinez BJJ in Philadelphia and with the living legend Marcelo Garcia in New York City.

“I thought my performance was OK,” Makovsky said of the Elliott fight. “I got the takedowns when I wanted and controlled him pretty well on the ground, leading me to some very good positions. Also, I feel like the takedown was working, so I kept going to it over and over making it more predictable and I took some poor shots. I need to be able to put people away when I get a submission. Basically, be more persistent and patient and get the finish when it's there.”

Up next, Makvosky heads to UFC 187 in Las Vegas to tangle with “The Magician” Dodson. Making his Octagon return, The Ultimate Fighter 14 winner has been sidelined with a torn ACL for nearly a year. In his last outing, Dodson did what he does best and scored an impressive second-round TKO of John Moraga last June, improving his UFC record to 5-1. It’s an excellent matchup in general, with both fighters competing for a title shot, but, on top of that, Makovsky and Dodson are friends and former training partners who know full well how tough of an opponent the other will be.

“John and I are friends and he certainly wasn't my choice of opponents,” Makovsky said. “The man is a ‘human spring’ and very possibly a real life ninja. His athleticism is impressive and he is very fast and explosive. He closes distance well and is difficult to close distance on. He has the most punching power in the division for sure. He is also very difficult to take down and even harder to keep down. I have to have a very calculated approach and, at the same time, be ready for fifteen minutes of hell. I will be.”

In preparation for Dodson, Makovsky has been busy traveling and training for easily his biggest bout in the UFC to date. Makovsky’s home base is in Philadelphia working with Martinez BJJ, Drexel University’s wrestling team, Stay Fly Muay Thai and striking coach Ricky Lee. Outside of “The City of Brotherly Love,” Makosky makes weekly trips to train with Garcia and Phil Nurse in New York City, as well as spending his last month in camp in Montreal at Tristar gym with head coach Firas Zahabi, striking coach Angelo DiBella and his phenom son, kickboxer Jonathan DiBella.

Of course, Makovsky is focused on Dodson, who many believe is the most dangerous talent in the division, including the champ, but Fun Size’s eyes are on the prize and that’s the UFC title. Makovsky is no stranger to title fights or having gold around his waist in his 19-5 pro career. Between that experience and his noted wrestling skills, he could be the one to overthrow “Mighty Mouse” at the top of the UFC flyweight division.

“Do I have anything derogatory to say about the champ? Yeah, he's great,” Makovsky laughed, referencing one of hometown’s fictional icons, Rocky Balboa. “I think it would be a great fight and I think he thinks the same. Demetrious is one of the best and most complete fighters in the UFC. He is strong everywhere. That said, he is a pressure fighter - albeit, an intelligent one - and that plays into what I feel I'm best at: countering. Also, I believe I would be the best wrestler/grappler for MMA that he has faced and I believe I have a more technical and intelligent approach than anyone he's faced. I also have the experience of fighting and training for multiple five-round fights. I believe some of my best performances were those five rounders, and if you understand it, experience is always an advantage. In my opinion, I have all the tools necessary to be the best in the world.”

This weekend, Makovsky and Dodson will collide, with the winner one step closer to UFC gold. “This will be my best performance, quite simply, because it has to be,” Makovsky said. “It is an opportunity for me to take a crucial step towards my ultimate goal. Along with that, the fight will in all likelihood be a whirlwind of athleticism and technical martial art skill.”