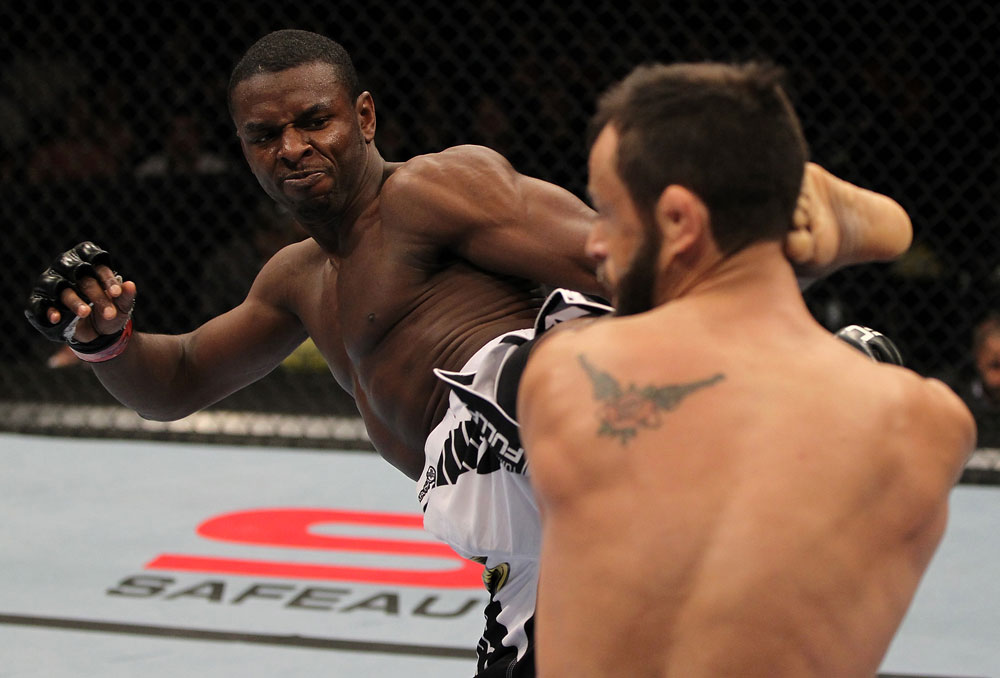 If you could find one word to describe the fighting style of UFC bantamweight contender Yves Jabouin, “disciplined” usually comes to mind immediately. There are no wild swings, very little wasted motion, and an intense focus on getting the job done in the most efficient way possible.

It’s the way the Haiti-born Canadian lives his life as well, not always the easiest thing to do when you’re trying to make 135 pounds while residing in Montreal.

“At home, we’re very healthy when it comes to dining at home,” he said. “The problem is when you’re outside of home. (Laughs) You’ve been to Montreal, so you know the multi-cultural diversity of restaurants and the food that’s available in Montreal. That’s when you really have to be disciplined and really try to limit your calorie intake.”

But with great discipline, great rewards usually follow, and for the 33-year-old, that means finally hitting his stride in a mixed martial arts career that began back in May of 2001. Call him a late bloomer, but the WEC vet didn’t start being perceived as a legitimate title threat until he came to the UFC and dropped from featherweight to bantamweight. He’s 3-0 since then, and as he approaches Saturday’s bout with Brad Pickett at UFC on FUEL TV 5 in Nottingham, England, Jabouin is on the verge of a step up to the elite level of the division.

“I think I’ve found my spot,” he said. “That (bantamweight) is where I feel the most competitive, and I think my performances have been talking for themselves. I think this fight with Brad Pickett is a key fight for me to know if I’m ready for title contention.”

1-2 in the WEC, which is a misleading record given his Fight of the Night battle with Mark Hominick in 2010 and a split decision loss to Raphael Assuncao in 2009, Jabouin’s UFC career didn’t get off to a great start, as he was submitted by Pablo Garza at UFC 129. But after the bout, he decided that giving up some serious physical advantages on the night of the fight just wasn’t worth it anymore.

“It’s different fighting somebody my size,” he said. “I feel much stronger. I’m naturally a strong guy, and I grew up training with bigger guys. Although when you’re going against a bigger guy, even if you don’t feel like he’s overpowering you, you’re still using a little more, so it will affect your conditioning and will affect the fight long-term, so right there you have a disadvantage. When I’m fighting somebody my size, I don’t have that disadvantage, so it’s much more of a fair fight.”

Three consecutive wins have followed the move - decision victories over Ian Loveland, Walel Watson, and Jeff Hougland – so you have to wonder, does he play the what if game and think how his career might be different now if he made the move sooner?

“Definitely,” he admits. “But three, four years ago, I would have never thought I’d be able to make 135. (Laughs) I guess with experience, you learn new tricks and meet new people that have the tricks and the proper way of doing so, so here I am.”

He’s also taking his disciplined approach to life into the Tristar Gym in Montreal, where he not only trains hard, but smart, looking closely at what he’s doing right and wrong before studying what his opponent does.

“It’s fairly easy to analyze myself, and where I train right now at Tristar Gym makes it even easier because you have so many talented fighters and different disciplines that you can easily compare yourself with certain people and say that’s where I need to work more and that’s where my strengths are,” said Jabouin. “That’s why I’m blessed in that sense and I think that helps to humble me a lot.”

So when you ask him about the Pickett fight and where a win would put him in the bantamweight pecking order, he humbly declares that he still has some growing and winning to do.

“I think I still have a few fights after this one, and maybe one or two fights will really decide if I’m in title contention,” he said.

That’s honesty you don’t get too often, but Jabouin makes it clear that his goal isn’t a title shot or even becoming champion, but becoming a champion that dominates his weight class and stays on top for a long time.

And though you may see them as vastly different fighters and people, Jabouin and Pickett share the same fighting philosophy and the same desire to give fight fans a show for their money. “The Tiger” keeps an even keel, but even the soft-spoken bantamweight can’t hide his excitement about throwing hands with England’s “One Punch.”

“Brad Pickett is a tough guy,” said Jabouin. “He’s somebody who comes to fight and that can mix it up with the hands or take you down and ground and pound. I’m expecting a war, and I’ve been working really hard in preparation for this fight, so we’ll see the outcome. But they (the fans) are going to be blown away. That’s a Fight of the Night right there.”