"I guarantee you, no matter how long you live, you can always learn something new about fighting." - Yves Edwards 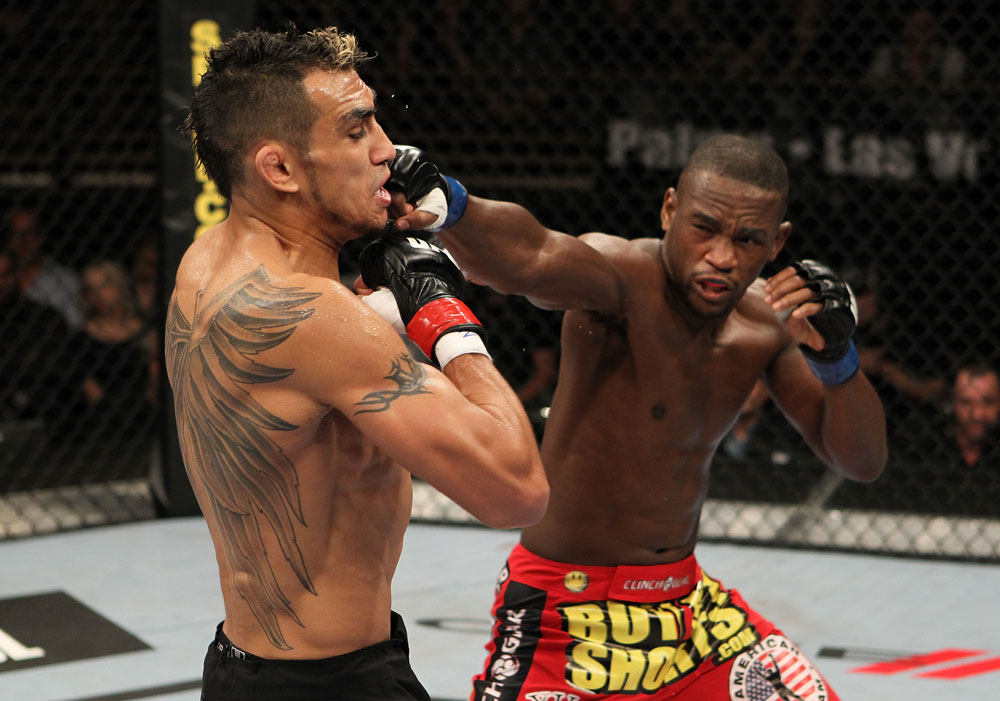 All it takes is a few seconds on the phone with Yves Edwards and you realize that he’s not like the other prizefighters. He says it comes from being a native of the Bahamas, but I tend to think that in another life he was a saxophonist in a jazz band – all cool, all the time, nothing ever bringing him down.

But that may just be the secret to his longevity in the fight game. Three weeks after his Friday fight with Jeremy Stephens, the 36-year-old will celebrate his 15th year as a professional fighter. That’s an amazing feat wherever you fight, but to still be doing it in the UFC, that’s rare air to be occupying; you know, Randy Couture / Dan Henderson territory.

“Even putting my name in a paragraph with those guys is an honor,” said Edwards. “I don’t think I deserve to be in the same statement with those guys, but at the same time, I think I’ve been lucky. I’ve got good genes and it probably comes from my laid-back, easy going attitude from being from the Bahamas. Nothing really bothers me. Maybe once a year I’ll get something that’s annoying, but not a lot, and because of that there’s no stress, no strain, no mental baggage that I’m carrying around that’s dragging me around and making me feel old. I still feel young inside and hopefully I can keep it going as long as possible because this is the most fun thing in the world, and I don’t want to give it up.”

Edwards is being modest. For newer fans, let’s just say that Edwards was possibly the best lightweight in the world when there wasn’t a lightweight division in the UFC. Today, his latest stint in the Octagon may have him sitting on a 3-2 record, but it’s a deceiving one, especially if you look at his most recent bout against TUF13 winner Tony Ferguson last December. Expected by many to be the gatekeeper for the young gun, Edwards instead gave him a three round war. When it was over, Ferguson got the decision, but Edwards won the crowd. It wasn’t much consolation though.

“I definitely felt that I did a lot better than 30-27,” referring to two of the judges’ scores that night. “I watched the fight again and I can see the argument both ways (for the winner), and I completely understand that 30-27 doesn’t mean somebody gets dominated. But I know that I won the second round. I don’t care what country or planet you’re from, I won that second round. And the third, I know it was close and I felt like I won and I can see the argument the other way, but I’m not one of these guys to harp on things that are out of my control. So from that fight I take the good and I go back and watch the tape and look for the bad and I try to fix those holes. It’s kind of like being a quarterback in the NFL. You gotta have a short-term memory when it comes to that kind of stuff. You try to fix it and then you make it better, but you can’t let it consume you, and the best way to get over a loss is to go out there and get a W, and that’s the game plan now.”

The defeat was Edwards’ 18th as a pro, against 41 wins and one draw. Back when he was coming up the ranks, a couple losses here and there didn’t hurt a fighter’s reputation that much simply because they were likely fighting killers night in and night out. But with so much competition for spots on the UFC roster and not enough room for everybody, a loss or two can be the difference between fighting in the Octagon and fighting on the local circuit. Edwards isn’t about to be one of those guys saying ‘Back when I was a kid’ though. He has grown with the game and he accepts life in it for what it is and adjusts accordingly.

“You never want to take a loss, because of how a loss can affect your career, but at the same time, it’s one of those things that definitely come with the territory,” he said. “I can’t focus on that kind of thing though. I have to go out there and fight my fight and I can’t let anything distract me. The good thing about me is it’s really hard for me to win a boring fight. That’s the slightly bigger part of the equation – this is a sport and probably the purest form of entertainment in sport. You’ve got the NFL and you’ve got MMA and those are probably the best two sports to watch, at least in my opinion. And I think my style is exciting and entertaining to watch. At the very least, you won’t be bored or you won’t want to be turning away and reading a book at the same time. You’re gonna pay attention to the fight. So as far as that goes, I don’t think about the losses during the fight. But is it tough to swallow a loss? Yeah. That’s a really tough pill to swallow and you don’t like looking at the loss column on your record and see it racking up. But at the same time, this is MMA and this is the UFC. 98% of the UFC and Strikeforce rosters are killers, so there’s nobody being protected and there’s no way around it: some guys will lose. But for me, I just gotta go out there and fight hard and not pay attention to those things and let the chips fall after the battle’s been won or lost.”

And if you look at the matchmaking done by Joe Silva, there isn’t any drop off on the level of fighter Edwards is getting, despite the loss to Ferguson. Originally slated to face Donald Cerrone in May before getting injured, Edwards now gets Stephens.

“It’s one of the things I asked for,” he said. “I remember when I got back to the UFC, I was so excited because now I had the opportunity to fight some of the best guys in the world. The UFC roster, especially at lightweight, top to bottom everybody’s a killer. So there’s not gonna be an easy one. Every single one, you gotta go out there and be ready for. You gotta prepare properly and be ready for it. Yes, it’s awesome that Joe Silva wanted to put me in there with Cerrone, a guy that I’ve got a lot of respect for and who I think is amazing when it comes to fighting in the cage, and as a part of that weight class, it’s gonna be really, really hard to get someone that I can’t get excited for.”

As for Stephens, the Thug-Jitsu master from Austin, Texas is eager to throw down with the “Lil’ Heathen” this Friday.

“He’s a young guy, but he’s committed and dedicated to the sport,” said Edwards. “He’s constantly improving and I think the biggest thing I’ve taken from watching tape on him and studying him, even when he gets frustrated or tired, is that he takes that power with him into the late rounds. His power is always dangerous, so that’s something you have to respect and be cautious about.”

It’s funny, but when he’s talking about fighting, that’s the only time you’ll hear the normally laid-back Edwards raise his voice. Maybe that’s the secret. After 15 years, he still loves the game. And if you ask him, he hasn’t even scratched the surface on what he can learn.

“I remember when I was a kid,” he said. “I saw the first Highlander movie and ever since then, especially when I started fighting, I’ve always wished that I was one of those guys, because I guarantee you, no matter how long you live, you can always learn something new about fighting.”