Yusuff Has Big Plans Now That He's In The UFC 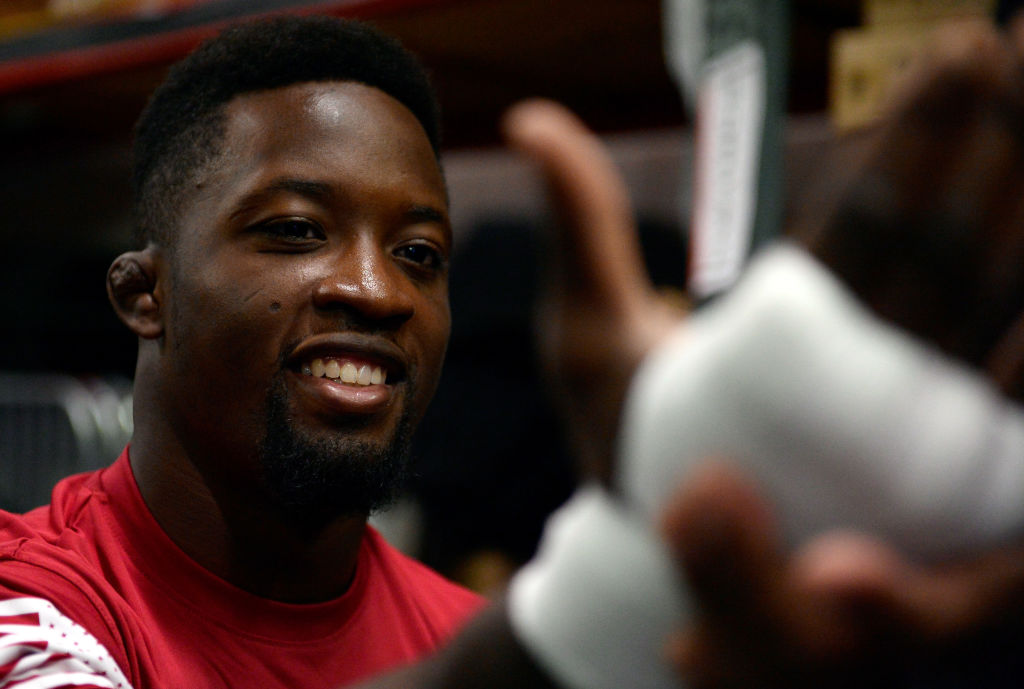 Sodiq Yusuff had just won the biggest fight of his career, a three-round scrap with Mike Davis on July 24 that some were calling the best bout seen on season two of Dana White’s Tuesday Night Contender Series.

But before he found out whether he was going to get a UFC contract or not, Yusuff had to make a phone call to his biggest fan. His mom.

“As soon as the fight was over I called her and she was crying on the phone and telling me she was proud of me,” said Yusuff, who did get that UFC contract, something he wasn’t very surprised about given the performance he just delivered against an equally ambitious foe in Davis.

“I was so surprised when I saw the odds for the fight,” said the 25-year-old underdog. “But I didn’t come in there just to win. I was coming in there to get that contract. And I was so happy I got matched up with Mike Davis, somebody that was gonna show my strength – another dog, another person that was gonna stand there and be like, ‘Hey, let’s do this.’ He wouldn’t resort to just trying to survive.”

And Davis was there from start to finish. But Yusuff wasn’t about to yield an inch. He never has, and in his mind, he never will.

“I make the joke all the time that I’m African, I can do this,” said the native of Lagos, Nigeria. “But that plays a big role into it. I feel like my people are built for struggle. And I also grew up watching my mom struggle a lot, and watching her grind through it to make it work out no matter what. And she didn’t really allow me to make excuses, especially with labor, so it’s just been ingrained in me. You’ve got to do what you gotta do. When that stuff is instilled in you as a child, it’s hard to take out.”

Yusuff’s mother came to the United States determined to make a better life for her children. But that would take time and money. So she worked tirelessly to reach her goal, and once she did, she sent for nine-year-old Sodiq and his younger brother. And eventually, he found something on television that set the path for his own American Dream.

“The moment I saw it (mixed martial arts), I was instantly attracted to it,” recalled Sodiq, who now makes his home in Bladensburg, Maryland. “I saw the warrior spirit. I’ve always been super big into anime and heroes, and when I first saw GSP (Georges St-Pierre) and guys like that, I looked at them as modern day warriors and modern day superheroes. It was the closest thing to being like one of those characters on TV. And it’s one of the few sports where your hard work directly impacts what you get out of it. Of course, there’s going to be bad luck and good luck here and there, but you play a big role in what you get from your success.”

When Yusuff began training in 2012, his mother wasn’t too thrilled, especially since he left college after two semesters to do so, but he explained what this meant to him and what he was willing to endure to get to his goals.

“She knows what she raised,” he said. “I’m a direct reflection of her and I let her know that I’m gonna give it everything I’ve got. I always knew I was gonna get into the UFC. The goal is what I do when I’m in the UFC.”

But before all this, Yusuff showed just what he was made of, going through a three-hour bus ride to the gym every day for nearly three months just to learn his craft. And then there was the tryout for the Lloyd Irvin Competition Team, an experience he hilariously recounts on his YouTube channel:

“That was hell,” he said. “I lost 16 pounds that day. And I was already a small kid, so it was rough. But no matter what sport I played or what coaches I had, I was used to being the hardest working guy around. So I never had a problem with working hard, and when I knew the competition team tryout was just gonna be trying to push you to make you quit, I knew I had it for sure. I was at least going to make it to the end.”

Yusuff estimates that 40 students started the tryout and only 15 were left at the end of the grueling day. But what it showed in those who made it onto the team was mental – not physical – strength.

“It was a hundred percent a mental test,” he said. “After you get past 40 minutes, there’s nothing physical left.”

Turning pro in 2016, Yusuff has continued to weather the ups and downs of the fight game to the tune of a 7-1 pro record. He admits that he’s always been one to chase after the next fight as soon as one is over, but after beating Davis, he reveals that he did take a little break.

It was always one challenge after the next and the happiness goes away so fast. So I said, ‘I’m gonna soak this in,’ and I soaked it in for two days.”

“It’s hard because there’s always the next day,” said Yusuff, who has plenty of good ones coming up for him.