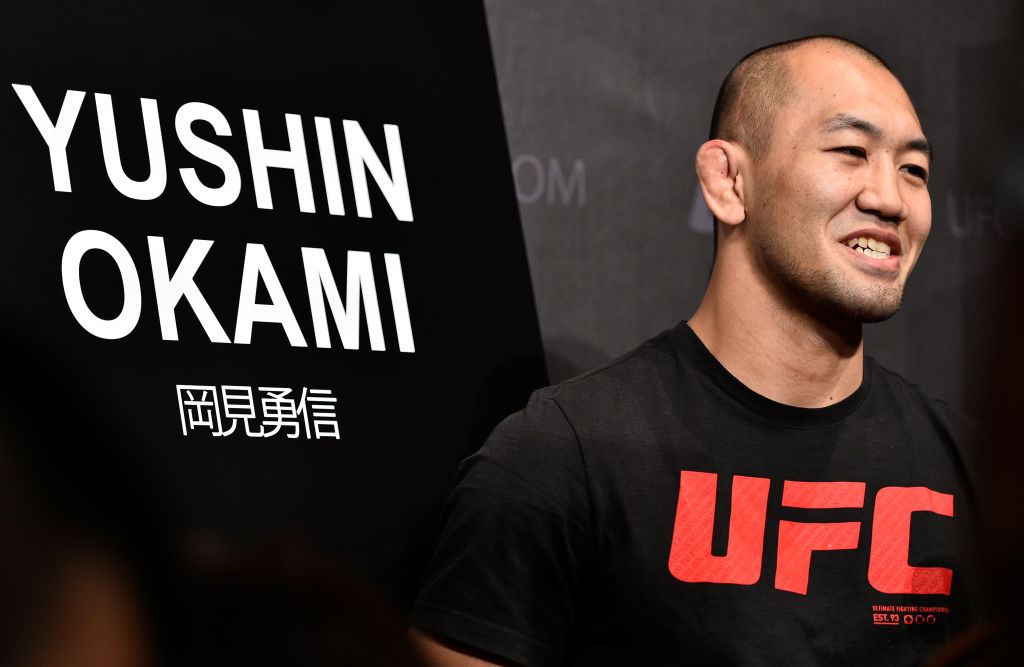 This Friday, Yushin Okami returns to the Octagon for the first time since 2013 to battle Ovince Saint Preux in the UFC Fight Night main event at Saitama Super Arena. It’s a tall order for Okami, coming in on short notice to move up a weight class and face OSP, but when the call came to step in for the injured Mauricio “Shogun” Rua, he didn’t hesitate.

“I always wanted to make a comeback to the UFC so I am just very happy,” Okami said.

Winner of four in a row, the former middleweight title challenger has gone 5-2 since his last UFC appearance against Ronaldo “Jacare” Souza in September 2013, and he even made a return to welterweight in 2015. In fact, after this bout at 205 pounds, Okami plans on making a run at 170-pound gold in the UFC.

“When I took this offer, I did notify the UFC matchmakers that I would like to fight at 170 from the second fight on this contract,” he said.

>As a big welterweight, the 36-year-old Okami will be a handful for his future foes, but the next order of business is Saint Preux, and the Kanagawa native can’t wait to reintroduce himself to UFC fans.

“They will see my experience,” he said when asked what should be expected of him in Saitama. “And also my mental approach towards the fight.”

Here are seven of Okami’s most memorable MMA moments:

Anderson Silva WDQ1 – Rumble on The Rock 8 – 1/20/06
13-2 as a pro, with his only losses coming against respected vets Amar Suloev and Falaniko Vitale, Okami made his second US appearance against a pre-prime Anderson Silva in Hawaii. Silva had made some noise on the international scene with five PRIDE appearances, but his 3-2 record in the organization didn’t exactly show off “The Spider” who went on to become one of the greatest fighters in MMA history. On this night in Honolulu, the Brazilian did look to be on top of his game, as he dominated the standup and tossed aside any Okami takedown attempts. Eventually, Okami got Silva to the mat, but just when it looked like the bout was going to get interesting in terms of “Thunder” getting back in the fight, Silva finished the bout with an up kick. Unfortunately for him, it was an illegal move, and he was disqualified by referee (and future UFC fighter) Troy Mandaloniz. On paper, it was a Silva loss, but Okami didn’t see it as such. “The records say I won but I really lost the match,” he said. “But I believe because of this fight I've grown stronger.”

Alan Belcher W3 – UFC 62 – 8/26/06 (Watch on UFC FIGHT PASS)
https://www.ufc.tv/video/yushin-okami-vs-alan-belcher-ufc-62
Three months after the win over Silva, Okami returned to Hawaii and lost a majority decision to Jake Shields. It would be his last defeat for over a year, and after two TKO wins in Japan, he made his low-key UFC debut against fellow debutant Alan Belcher, a late replacement for former middleweight title challenger David Terrell. The bout was punctuated by what can be best described as a bizarre front flip by Belcher while Okami rode his back in the third round, but other than that bright moment, it was all Okami, who pounded out a workmanlike three round unanimous decision and announced his arrival to the UFC.

Mike Swick W3 – UFC 69 – 4/7/07 (Watch on UFC FIGHT PASS)
https://www.ufc.tv/video/yushin-okami-vs-mike-swick-ufc-69
With a 5-0 UFC record, The Ultimate Fighter&rsquo;s Mike Swick was rapidly closing in on a middleweight title shot, and in front of his Texas fans at UFC 69, most expected him to move to 6-0. But Okami was poised and ready to perform, and he did just that, as he dominated Swick on the mat and grounded and pounded his way to a clear cut three round decision win. It was the fourth consecutive time (following Belcher, Kalib Starnes, and Rory Singer) that the Kanagawa native issued an opponent his first Octagon defeat.

Rich Franklin L3 – UFC 72 – 6/16/07 (Watch on UFC FIGHT PASS)
https://www.ufc.tv/video/rich-franklin-vs-yushin-okami-ufc-72
After Martin Kampmann was forced out of his UFC 72 main event against Rich Franklin, the next logical choice to face the former 185-pound champ for a shot at Anderson Silva’s crown was Okami, who brought a four-fight UFC winning streak into the bout. Unfortunately for Okami, his patient style cost him, as Franklin shot out to a 2-0 lead on the judges’ cards. In the third though, Okami showed that he was ready for the best in the weight class, as he closed strong behind a ground attack that included a kimura that almost ended the bout. “It was pretty close; he had me a little nervous but I was able to pull out of it,” said Franklin, who earned the three round unanimous decision win and sent Okami back to the drawing board.

Evan Tanner KO2 – UFC 82 – 3/1/08 (Watch on UFC FIGHT PASS)
https://www.ufc.tv/video/yushin-okami-vs-evan-tanner-ufc-82
Four months after the loss to Franklin, Okami returned with a three round win over Jason MacDonald, yet despite a stellar 5-1 record in the Octagon, fight fans were looking for more thunder from “Thunder,” whose only UFC stoppage came against Starnes at UFC 64. Okami’s response? An emphatic second round knockout of comebacking former 185-pound champion Evan Tanner at UFC 82. It was Okami’s most impressive UFC performance to date, as he dropped and bloodied Tanner in the first round and then finished him with a knee to the head in the second frame.

Lucio Linhares TKO2 – UFC Fight Night – 3/31/10 (Watch on UFC FIGHT PASS)
https://www.ufc.tv/video/yushin-okami-vs-lucio-linhares-ufc-fight-night
Following the Tanner fight, Okami split his next two, beating Dean Lister and losing to Chael Sonnen. After the Sonnen fight, Okami knew that to break into title contention, he not only had to put together a win streak, but he had to do so in impressive style. In March of 2010, he got his first opportunity and he made an example of Brazil’s Lucio Linhares, punishing him with some of his best standup work to date en route to a second round stoppage. The victory sent a statement to the rest of the division that just when you thought all you had to worry about was Okami’s ground game, now he could knock you out standing too.

Nate Marquardt W3 – UFC 122 – 11/13/10 (Watch on UFC FIGHT PASS)
https://www.ufc.tv/video/yushin-okami-vs-nate-marquardt-ufc-122
Okami carried the momentum of the Linhares fight into an August 2010 bout against Mark Munoz, which he won via split decision. But the biggest fight was in front of him, a UFC 122 main event against Nate Marquardt. The winner would challenge Silva for his world title, and with all the pressure on his shoulders, Okami bit down on his mouthpiece and put in the work necessary to decision Marquardt and become only the fifth Japanese fighter to that point (after Yuki Kondo, Caol Uno, Hayato “Mach” Sakurai, and Kenichi Yamamoto) to challenge for a UFC crown. He would lose that rematch to Silva at UFC 134, but he went on to win three more bouts in the Octagon before his release in 2013. Friday night, Okami returns.