"Japanese MMA has lost its vigor now,” he said. “But by touching the real MMA live, I believe it will grow back again." - Yushin Okami 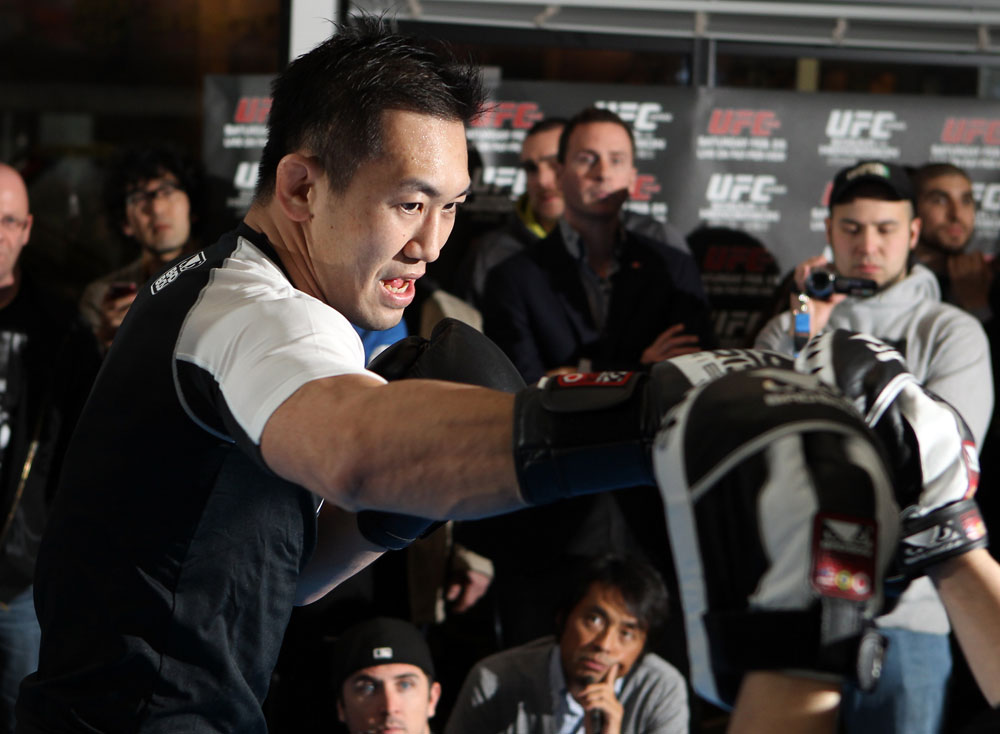 When he stepped into the Octagon to face UFC middleweight champion Anderson Silva last August, Yushin Okami was there in body, but in spirit, it simply wasn’t the same fighter who defeated Lucio Linhares, Mark Munoz, and Nate Marquardt in succession to earn a shot at a championship no Japanese fighter had ever secured.

“In terms of the mental, my vision got very narrow,” said Okami through translator / jiu-jitsu coach Gen Isono. “I was confused and I lost what I should do there.”

Silva can do that to any fighter, and he’s been doing it longer than anyone in UFC history, so for Okami to get stopped via strikes at 2:04 of the second round by “The Spider” was no reason for him to hang his head. That doesn’t mean he just dismissed the loss though; instead, he dusted himself off, and after a month’s rest to reflect, he began training again at Portland’s Team Quest gym.

“About a month later, I started training at Team Quest, and then I could put things in perspective,” said Okami, who doesn’t look at the nearly ten month gap between his win over Marquardt and the fight with Silva as a factor in his defeat. That’s no surprise, as he’s not the kind of athlete who makes excuses. He’s one that takes his lessons and moves on. He did it after his first UFC loss to Rich Franklin in 2007, repeated the feat following a 2009 loss to future training partner Chael Sonnen, and now he begins the trek back to the top once again this Saturday, when he battles Tim Boetsch in UFC 144 action at Saitama Super Arena in Saitama, Japan, Okami’s first bout on home shores since a TKO win over Izuru Takeuchi in June of 2006.

“It will be the first time in five and a half years,” said Okami of fighting at home. “I always wanted the UFC to come to Japan and I always wanted Japanese fans to enjoy watching my fights. Sweeping away my last loss in Japan with a lot of cheering on my back, it will give me a sense of satisfaction.”

It’s a special moment for the 30-year old Okami, who has basically been the out-of-towner for the last 13 fights of his 27-6 career. That’s a long time for anyone to not be at least the home country favorite, but in the last five-plus years, Okami has built himself a level of respect among non-Japanese fans that has also earned him kudos from UFC President Dana White as the best Japanese fighter to ever compete in the Octagon. That’s high praise.

2012 will be a pivotal year for him though, beginning with his match against Boetsch, the underdog going into this fight, but someone who certainly shouldn’t be underestimated.

“I have seen some of his fights in the UFC,” said Okami of “The Barbarian.” “He is big and physically strong and he has a good wrestling pedigree. He looks like a typical American-style fighter. I think he has a big frame with great power since he fought in the light heavyweight division, and I should be aware of his strength. Training with Team Quest, there are some changes in my mind about fighting and I am going to try them when I fight Tim.”

Hoping to get three fights in this year, Okami is well aware that if he gets his wish, the next two are likely to be outside of his home country, so it’s back to being a road warrior. That’s okay though; he’s embracing his time at home and the task ahead, which is not just to beat Boetsch, but to let Japanese fans know that MMA in the Land of the Rising Sun is alive and well.

“Japanese MMA has lost its vigor now,” he said. “But by touching the real MMA live, I believe it will grow back again.”

And who better to bring it back than a resilient and classy fighter who represents the best the sport has to offer?

“I have grown up in Japan, so every part of me is truly Japanese,” Okami said when asked about the Japanese fighting spirit. “In that sense, I think I carry through the way of fighting which I believe represents a Japanese fighter’s spirit. And I hope the fans enjoy watching a reborn Yushin Okami walking to the top again."