Yushin Okami - A Man with Everything to Fight For

“I believe it (a win over Silva) would add one more boost to the
Japanese people who are now working really hard to reconstruct Japan." - Yushin Okami 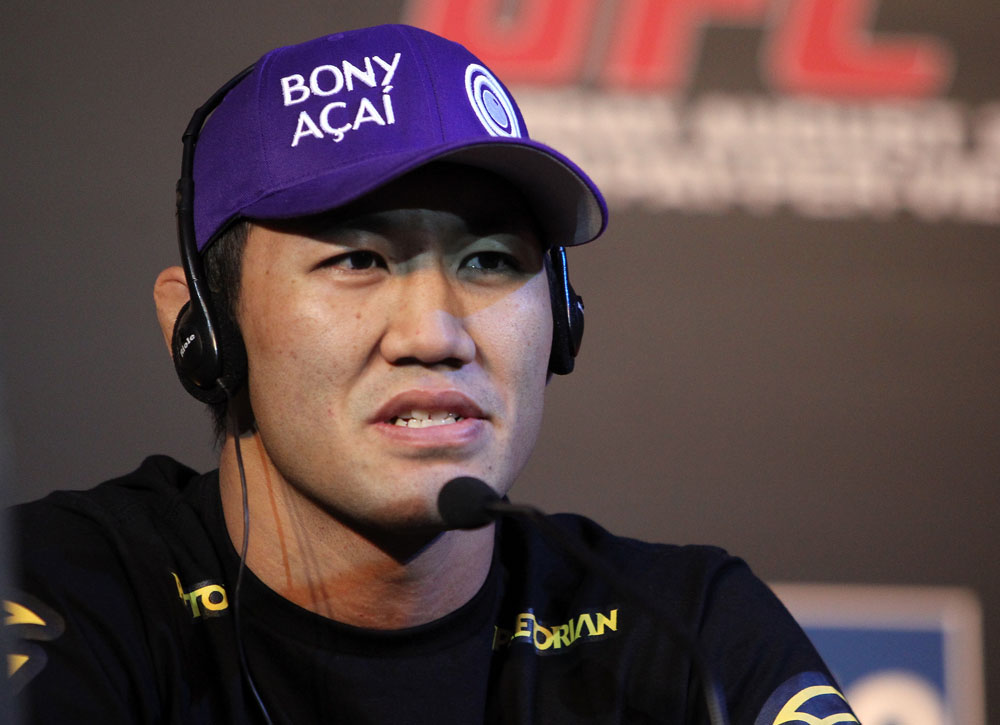 Though it’s debatable how many diehard mixed martial arts fans sat down and watched the entire final of the Women’s World Cup of Soccer between Japan and the United States on July 17th, the result was undoubtedly one that struck to the heart of another underdog looking to pull off a major upset of his own.

“I am inspired by watching various sports,” said number one middleweight contender Yushin Okami through translator Gen Isono. “Especially, I was inspired by the victory of the Japanese women’s soccer team in the World Cup at this time. It taught me how important it is for me to believe in myself once again.”

Against the odds, the Japanese women survived scoring chance and scoring chance by the Americans, some with great skill, others with a wink from Lady Luck. But when it was time for them to fire back, they made sure each shot counted, eventually earning a victory via penalty kicks.

This Saturday’s UFC RIO main event against Anderson Silva is much the same for Okami. To beat the best pound for pound fighter in the planet, Okami must survive the inevitable bursts of speed, accuracy, and power from Silva, and while he won’t get many chances to even the score, when he does, he must make sure he delivers. If he can do that enough times or get Silva in enough precarious positions, either against the fence or on the mat, he has the chance to become the only Japanese fighter in history to win a UFC title.

Looking over the roster of his peers who have competed here, from Kazushi Sakuraba and Tsyuoshi Kosaka to Caol Uno and Takanori Gomi, to do that would be an amazing feat. To do it against Silva lifts the achievement even higher. But he isn’t going to bow down to such pressure, only saying, “Taking the belt from Anderson would let me establish myself as an MMA fighter throughout my life.”

More than that, Okami will become an inspiration for a country devastated by an earthquake in March that tragically tore through the Land of the Rising Sun. He knows it too.

“I believe it (a win over Silva) would add one more boost to the Japanese people who are now working really hard to reconstruct Japan. Japan has been suffering in a difficult situation, and when I think about what I can do, the answer is getting the belt from Anderson, so I have been focusing on it.”

To do so, Okami traveled to Portland, Oregon to train with the members of Team Quest, including former UFC middleweight contender Matt Lindland and current 185-pound standout Chael Sonnen. It’s not the first time he’s worked with the man who came the closest to beating Silva in the UFC, and his expertise couldn’t have come at a better time for Okami.

“Matt Lindland, the people in Team Quest and Chael are giving me a lot of advice and support in my training,” he said. “They have a lot of ideas about Anderson Silva because Chael fought him once.”

So did Okami, and a lot of the talk surrounding this highly-anticipated bout is that “Thunder” is the last man to defeat Silva. Of course, that 2006 win in Hawaii comes with a bit of an asterisk, as Okami’s win came via disqualification when Silva cracked him with an illegal upkick at 2:33 of the first round. To his credit, Okami understands the circumstances that led to his win, and it’s something he has downplayed over the years.

“I do not think that was my victory,” he said. “I think the fight has never been given any conclusion. I am glad to bring an end to that fight on the best stage.”

It’s a classy response and one that is truthful. There was no resolution to that first bout, and what better way to settle it than in a UFC main event with a world title on the line. And while getting here took some time, Okami always believed that Silva had the goods to become the fighter he is today.

“I have known how good he was,” he said. “There is no surprise when I watch his success in his UFC career.”

By his second fight in the Octagon, Silva was a world champion. On that same UFC 64 card in Las Vegas, Okami notched his second UFC victory, stopping Kalib Starnes in the third round. A 4-1 slate in his next five bouts secured him a rematch with Silva for the title at UFC 90 in October of 2008, but a broken hand forced him out of the fight.

Now, nearly three years later, he’s facing Silva, but after a series of starts and stops, it took a November 2010 win over Nate Marquardt to finally secure his dream fight. Before the UFC 122 bout, Okami was understandably nervous, and when asked if he felt the pressure that if he didn’t win he would never get a shot, he responded quickly and to the point.

But with everything on the line, Okami performed, taking a three round unanimous decision and a shot at the belt. It also gave him something he has taken with him to Rio De Janeiro this week.

“The victory over Marquardt gave me a lot of confidence,” said the 30-year old Okami. “Also by winning that fight, I was given a clear vision of my title shot, so I started to think about fighting Anderson Silva from that moment.”

He hasn’t stopped thinking about the fight yet, and he won’t until the Octagon gate closes and it’s just him and “The Spider.” Okami remembers what it’s like being in that spotlight with Silva.

“I still remember his appearance,” he said, “It was something like an aura. And I felt how good he was, but I will utilize that experience to guide myself to a better direction.”

A winning one. And though Silva left Hawaii that night with a loss, he has gone on to become a fighter many believe is the best ever. But what many forget is that Okami is not the same fighter he was in 2006 either.

“I assume that we both have changed a lot,” he said. “Anderson has been changed and I have been improved in all aspects.”

Okami also has everything to fight for.