Yushin Okami: A Fight is a Fight

"My goal is not to challenge for the title; my goal is to get the title. So I have spent my life to get closer to becoming the best Yushin Okami." - Yushin Okami 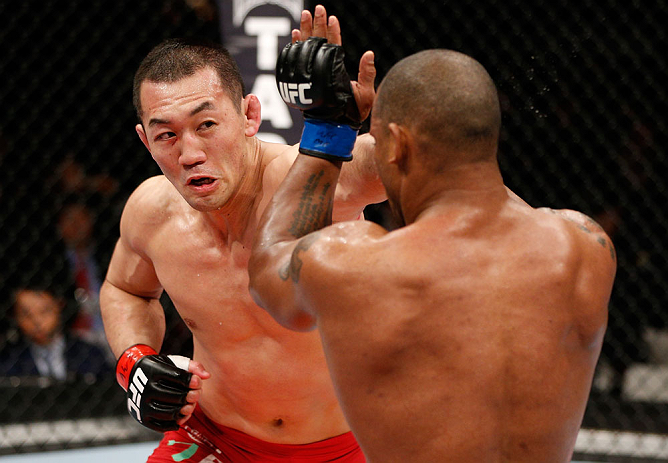 To be as good as Yushin Okami has been for as long as he has is not easy. He’s fought the best the Octagon has had to offer at 185 pounds for seven years, with the only thing eluding him being the UFC middleweight title.

And even after losing to Anderson Silva in their 2011 title fight, he won three of his next four fights leading up to Wednesday’s UFC Fight Night co-main event against Ronaldo “Jacare” Souza, continuing a stellar run that has made him the most successful Japanese fighter in the promotion’s history.

So what is it that has made him not only one of the best middleweights in the game, but one of the most resilient?

“I have never picked any shortcut,” he said through translator Gen Isono. “My goal is not to challenge for the title; my goal is to get the title. So I have spent my life to get closer to becoming the best Yushin Okami. The key is thinking about not only winning a single fight, but working on becoming the best fighter. Then a loss becomes another great opportunity for learning.”

Following the Silva bout, Okami was upset by Tim Boetsch late in a fight that he was winning handily up to that point. Many believed that the tide may have turned in the Kanagawa native’s career, but three consecutive victories over Buddy Roberts, Alan Belcher, and Hector Lombard put him back in the title picture heading into the important matchup with Souza, one of the sport’s top groundfighters. Okami is not just complimentary of the Brazilian’s jiu-jitsu though.

“Jacare is a great grappler, but I see him as a good MMA fighter as well,” he said. “I am excited to test myself against him in all aspects of this sport.”

That means possibly going to the ground with someone who can end your night if you have just one split second loss of focus. That’s an intimidating thought for anyone, but in Okami’s case, it’s important to point out that he has never been submitted, a pretty impressive fact considering that he’s been in with his share of black belts over the years.

“When I started learning grappling, there were very tough guys around me,” he said when asked about his submission defense. “In those days, I learned how to be patient and how to defend myself through the training with them.”

Okami has also learned over the years that he can handle himself on the feet, something Souza has been improving at rapidly over the last couple years and evident in his 41 second knockout of Derek Brunson and in his bout with Ed Herman. So how does a standup fight between Okami and Souza play out?

“He is very explosive and aggressive, even when he plays his standup game,” said Okami. “He may be able to keep standing up in front of me, but it does not mean that he can fight against me with his standup.”

That’s the confidence that comes with a resume that includes the names Silva, Lombard, Belcher, Boetsch, Rich Franklin, Chael Sonnen, Nate Marquardt, Evan Tanner, Jake Shields, and on and on. But does he think a win over Jacare puts him in line for another title shot?

“Yes, I do, but not just winning the fight, but by showing how I win the fight,” he said. “I would like to make it a big step for another title shot.”

Yet even though Okami owns a 2006 disqualification win over former champion Silva, a rubber match probably won’t happen if the Brazilian star regains his title from Chris Weidman in their December rematch. A fight with Weidman? That may be more realistic. So what did Okami think of the shot heard ‘round the world landed by Weidman on Silva in July?

“The way Weidman finished Anderson shocked me, but I was not surprised by the fact that he beat Anderson,” he said. “It (the rematch) is going to be another epic fight. As an MMA enthusiast, I just want to enjoy watching it. Both fighters have proved so much and have nothing to prove anymore. Everyone knows they are true champs and it would be a great honor and very exciting for me to challenge either fighter.”

First things first though, and that’s Wednesday’s meeting with Jacare, one Okami has been preparing for in San Diego with the renowned Alliance MMA team.

“When I saw the fighters from Alliance MMA, I found all of them to have excellent speed, movement and game plans. Through my sponsor Badboy, I had a chance to visit Alliance and when I visited there, I found they could give me what I needed.”

What he needs most of all is another win, making it four straight and leaving him as a contender that just can’t be ignored. And to do it in Brazil, the site where he lost to Silva, would make his comeback complete. He’s ready.

“I thought too much when I fought there the first time,” said Okami. “That is what I learned most from the experience. A fight is a fight. Now I think of it in a simple way. I am really focused only on fighting itself.”