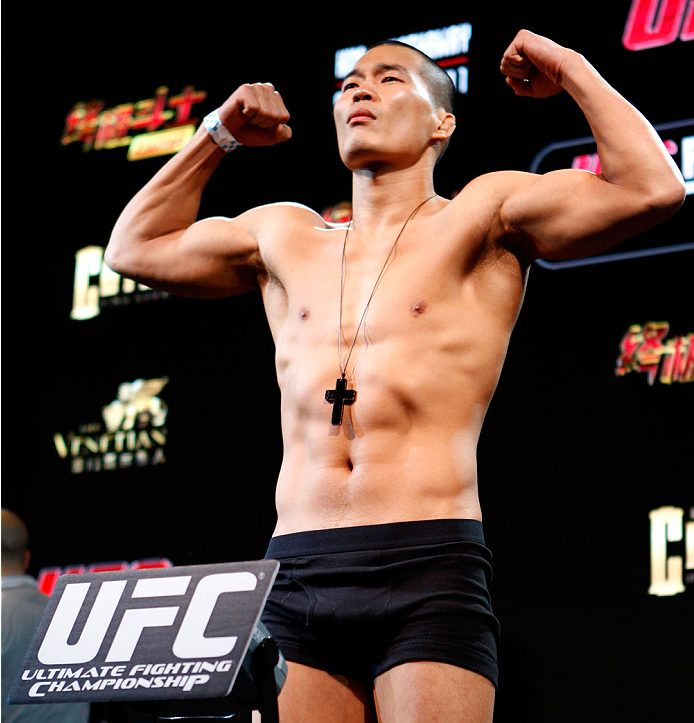 Twelve years into his career as a mixed martial artist, Yui Chul Nam has earned his nickname “The Korean Bulldozer.” That means if opponents are looking for a leisurely, non-taxing three rounds of point fighting, this isn’t the guy they’re looking for.

Luckily for UFC fans, Nam’s opponent at UFC Fight Night this Saturday, Mike De La Torre, approaches the fight game in a similar fashion. Nam acknowledges this fact, well aware that “El Cucuy” will be looking for the finish early and often. But he promises that he won’t fade under the pressure.

“I think he is a very aggressive, exciting fighter,” Nam said of De La Torre. “I know I need to weather the early storm from him, but I am going to be more aggressive and go toe-to-toe against his aggression. It is going to be a very exciting fight.”

Is anyone willing to dispute that? Probably not. And how do you not love a fighter who says that his response to an aggressive opponent is to be more aggressive? It’s impossible not to. But the fact that Nam has brought his appeal from his hometown of Seoul to the rest of the world is more than just a testament to the power of sports, but a personal reminder to the 34-year-old of how far he’s come. It hasn’t been easy, but the young boy whose dream was “to take over the world like a superhero” is on his way to being a superhero of sorts in the Octagon.

“It's been 12 years since I became a pro fighter,” Nam said. “I just want to be the best. That is my dream and I do my best to make that dream come true. I just feel happy and grateful being in the middle of the course, and I am getting better every day. I feel like I'm getting closer to fulfilling my dream.”

Getting to the middle of the course is an accomplishment in itself; to survive a rocky beginning is even more impressive. And though the early years of Nam’s journey were smooth when it came to what happened on fight night, as he started out 8-0 on the Korean circuit. When the gloves were off, he was forced to deal with a society not really prepared for his sport.

“Back in the day, MMA was regarded as just barbaric fights rather than a sport, and there used to be a lot of negativity towards that,” he said. “People saw it as if it was some type of freak show or circus. I even made my MMA debut in a night club. It was kind of the dark days of Korean MMA. But now Korean people look at the UFC with totally different views. Korean fans accept the UFC as a legitimate sport and look up to the UFC fighters.”

He’s one of those fistic heroes, owner of an 18-5-1 record that includes a 1-1 slate in the Octagon. This Saturday, it’s his first fight in Seoul since 2013, but more notably, his first as a UFC fighter.

“Many friends, family members, and fans are coming on the day,” he said. “I have never lost in Korea. This gives me more motivation to win. I am going to win no matter what. Whatever sacrifice I need to make, I don't care. I just want to give my fans, friends and family my victory so we can all enjoy it together.”

For Nam, seeing the UFC in Korea wasn’t a dream; it was inevitable. So even in the dark days of the sport there, he was fighting the good fight and preaching the virtues of MMA to anyone who would listen.

“I thought someday it would definitely happen,” he said. “In fact, many fans in Korea have asked me when they could see the UFC here. And whenever I got the questions, I always answered ‘it is going to happen soon.’ Eventually, the time came.”

And Nam is in the thick of it, one of seven Korea natives fighting this weekend at the Olympic Gymnastics Arena. Yet beyond the historic nature of the card, Nam is looking to further his career as well, and while he lost a split decision to Phillipe Nover in his featherweight debut in May, he believes that he found a home at 145 pounds.

“I feel like I am more competitive at featherweight,” Nam said, setting his sights on a top 10 ranking in 2016. Yet as a man in the middle of his course, he knows that it’s not just about getting to the end, but how you get there. And no one is making the most of that journey quite like Nam is.

“I've achieved lots of things, including three titles in other promotions and various bonuses, and I gained so much experience,” Nam said. “Korean fans say they always believe I fight crazy, exciting fights no matter what. So also in the UFC, I want to be the fighter who showcases what the meaning of combat sports is truly about and I hope to get the bonus every time I fight. And I am going to be a champion.”