Young Guns Fires on the Flyweights

"I’m literally just excited to fight, to get out there and perform, and it doesn’t matter who stands across from me." - Scott Jorgensen 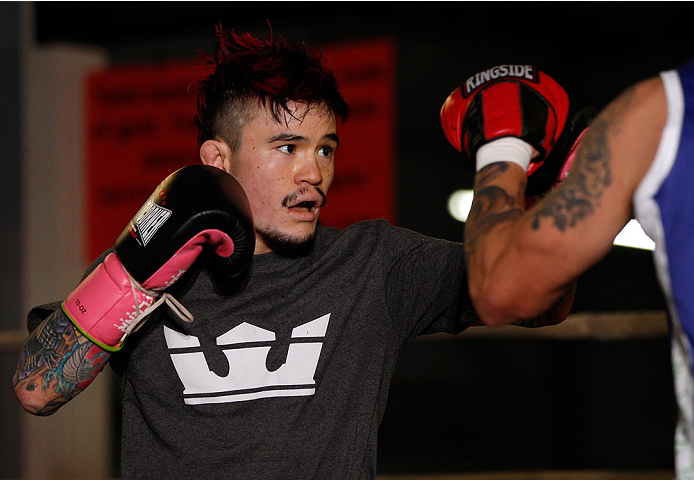 Losing’s a rough proposition in the world of mixed martial arts, especially in the UFC. It costs you half your paycheck, could cost you a job, and then you have to deal with all the talk from the critics until you get a chance to redeem yourself. For Scott "Young Guns" Jorgensen, an April loss to Urijah Faber also meant he got a talking to from his youngest coach – his seven-year-old son Braeten.

Talking about his son, who has been wrestling for the last few years, you can tell immediately why the 31-year-old Jorgensen does what he does. It’s not necessarily for the money, though that’s always important to make sure there’s food on the table. But it’s to set an example, to do something his son can look at proudly and say ‘that’s my dad.’

So when Jorgensen, a longtime bantamweight contender, decided to make the move ten pounds south to the flyweight division, it wasn’t because he was being run out of the 135-pound weight class or that it was his last resort; his reasoning was simple:

“The first thing was, where do I see myself doing great things at?” he said.

And 125 pounds was the answer. It was something he and his coaches and training partners decided before he got a late-notice call to headline The Ultimate Fighter 17 finale show with Faber earlier this year, but when that opportunity arose, he couldn’t refuse it.

“I was in the process of trying to get my weight under control enough to get it down low enough to make 125, and then a short notice fight against Faber popped up and of course I’m gonna take that,” said Jorgensen. “I get to main event a card in the UFC against one of my good friends and one of the reasons I’m doing what I’m doing today. So I jumped all over the fight, and as soon as that fight was done, whether it was win, lose or draw, it was back to getting down to 125.”

The result of his decision was his longest layoff as a UFC fighter, but as he explains, it was a necessary evil to make sure everything’s in place before he steps on the scales Friday to weigh in for his Saturday bout in Sacramento against Octagon newcomer Zach Makovsky.

“I wanted to make sure I could make the weight,” he said. “There’s nothing more embarrassing in my mind than saying ‘I’m going to 125’ and you call for a fight and get to weigh ins and you miss weight. So there’s no way that’s happening. And I’m excited and I’m thrilled to do something I haven’t done in forever.”

‘Forever’ means back in college, where Jorgensen was a three-time Pac-10 wrestling champion for Boise State. In those days, weight cutting was a way of life for the 133-pounder, but when he entered the MMA world, he fought in every division from lightweight down, eventually settling in at bantamweight, where he made his name as a member of the WEC roster from 2008 to 2010. But as the years went on, the bantamweights just got bigger and bigger, leaving the 5-foot-4 Idaho product at a decided disadvantage.

“In MMA I started fighting at 155, then to 145, and then I went down to 135, and now, as the sport’s progressing, these guys are huge,” he said. “They’ve gotta have an average height of like 5-9 and an average reach of 70-plus inches, so the problems I ran into weren’t strength-related; they were just physiological. These guys are just bigger than me. Reachwise, they’re able to keep and maintain the distance on me, and it’s harder to get my takedowns and things like that. So physiologically, 125 is a better fit. And I’m healthier right now than I’ve ever been.”

Jorgensen made 133 pounds the day before this interview on December 5th, putting him in more than good shape heading into a bout that saw him matched up with Ian McCall, then John Dodson, and finally Makovsky. Yet no matter who it is, he’s just happy to fight anyone.

“I took it like college wrestling,” he said. “We never necessarily knew for sure who we were fighting, and in a tournament, you never know who you’re gonna meet. You hope for the best, and go out there and prepare yourself to defeat whoever is in front of you.”

And you train hard. That’s an order from Braeten Jorgensen.