Song Yadong is still not 21 years old, the legal age of adulthood in many places around the world. It’s almost crazy to think about that, considering that the bantamweight prospect has been competing professionally since 2013.

Yes, while most teenagers were hanging out and playing video games, Song was fighting grown men, and more often than not, he was winning. Today, at an age where he still can’t legally drink alcohol in the United States, he’s 2-0 in the UFC and considered one of the top prospects in mixed martial arts.

“If you want to be a professional athlete, you need to be very focused on your target and you can’t let other people manipulate your mind,” said Song, who faces Vince Morales this Saturday in Beijing. “Always train hard and stay hungry, don’t give up easily, and always tell yourself you can do it.”

All true statements, but all easier said than done, especially when there are so many distractions around. But once Song realized he had the talent to make this sport his career, his tunnel vision took over and, these days, he leads a Spartan-like existence.

“I don’t have much life when it comes to entertainment,” he said. “I have to cut weight every two or three months, and I also sacrifice time with my family.”

But it’s paying off. A year ago, Song debuted in the UFC with a first-round submission of Bharat Khandare. Impressive, but with only seven fights, Khandare was still fairly new to the game. It was Song’s second trip to the Octagon that really turned heads, as he knocked out Brazilian veteran Felipe Arantes in the second round of their June bout. It earned the Heilongjiang native a Performance of the Night bonus and put him on the international MMA map in a big way. Now life is a lot different than it was in November 2017. 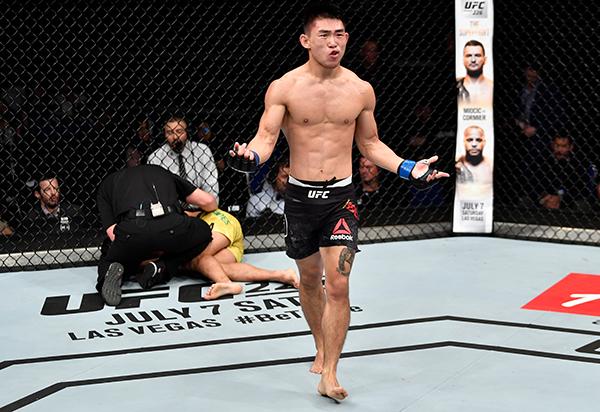 “My life is busier than in the past,” he said. “I study and train almost every day. I used to play a lot, but this year I trained the hardest of my whole career. I feel I’ve improved so much, but it is also the toughest year in my life.”

It’s likely going to get tougher as the level of competition rises. Originally scheduled to face another veteran standout in Frankie Saenz, an injury to Saenz brought in respected prospect Vince Morales. But the switch in opponent isn’t rattling Song.

“I still had enough time to change my strategy and prepare the best techniques against him,” said Song. “Vince is a good striker, and he has good movement and footwork as well, but he is not very good on the ground.”

Song has proven adept everywhere over the course of his career, with his 13 pro wins including five knockouts and three submissions. Add in work with California’s Team Alpha Male, and Song is ready for anything Morales brings on fight night.

“Vince will definitely feel the pressure I bring to him during the fight,” Song said. “Although he is older than me, I fought more fights and am more experienced than him.”

As hard as it seems to fathom, the 20-year-old with 18 fights has more experience than the 28-year-old with 10 bouts, but Song will have to get used to surprising people as the years go on. So the question is, can he make a run at Jon Jones’ record for youngest champion in UFC history?

“Of course I want to beat his record, but it’s not important,” said Song. “My goal is the championship itself.”

And whether he gets there at 23, 25 or 30, that’s just fine with Song. As long as he gets there. But that’s a conversation for another day. Today, he’s thinking about Saturday night and some more statement-making performances in 2019.

“I hope I can challenge high-ranked opponents, and I hope my MMA techniques can improve more,” he said of his plans for next year. “I want to bring exciting fights to our fans.”