“I think you need downs to be able to show how much you can go up, and without the downs, you wouldn’t have that much character." 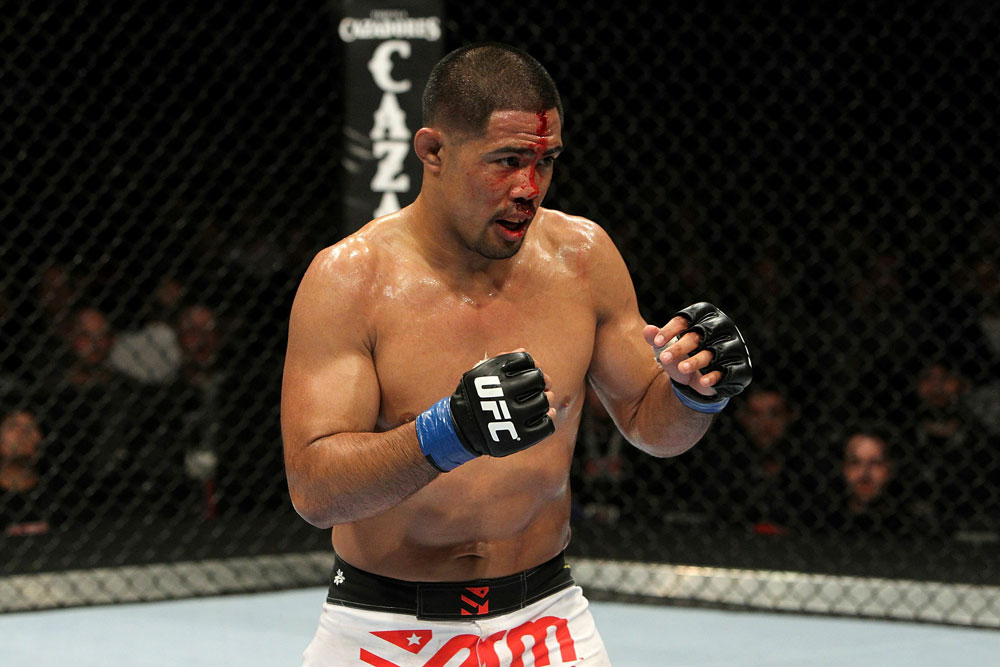 A sore toe. After three grueling rounds with Aaron Simpson last November in a bout that saw him and his opponent show off their world-class wrestling skills along with their thudding punching power, all Mark Munoz could muster for the morning after injury assessment was a bruise on his toe from when he kicked Simpson’s knee.

It was all that and more, and it was clearly one of the best fights of 2010 when it came to two men digging deeper and deeper in an effort to pull out a win. And to think, Munoz and Simpson are actually friends. But you wouldn’t have known it by the way they punched, kicked, and threw each other that night in Michigan. When it was over, the respect each fighter had for the other grew, the fans got an action-packed scrap, and Munoz got his fourth UFC win in six tries. And he did it the old fashioned way – by earning it.

Munoz knows the feeling well, having won the NCAA Division I National wrestling championship for Oklahoma State University in 2001. Nearly a decade later, he’s moving closer and closer to challenging for the UFC middleweight crown with each victory, and this Thursday, the man looking to halt his forward momentum is another old wrestling buddy and a teammate of Simpson’s, CB Dollaway. Yet while Simpson has turned into a punch first, grapple later fighter since leaving Arizona State, Dollaway is more apt to choke you out than knock you out.

“I know CB’s got really good submissions from the top, especially the front headlock, and he’s got great transitions as well,” said Munoz. “I know he leads with a lot of kicks too, but I’m prepared. And I’m a wrestler too, so if he tries to take me down, that’s great, I want to go there. This fight is gonna be won in transition, from striking to takedowns, and right after the takedown you know where I go and where he goes, and it’s going to be a transitional fight. I’m ready and willing to go the whole 15.”

When Munoz says he’s willing to go the whole 15 minutes tomorrow night, it may be the understatement of the year, because to “The Filipino Wrecking Machine”, his athletic career has never been about being the most gifted or the one with the best connections. It’s been about work. Hard work. And a lot of it. That kind of approach – not only to MMA, but to everything in his life – has made Munoz a favorite throughout the business – from his peers, to his training partners, to the media, and to the fans.

“I take that work ethic into everything I do, whether it’s my family life, my gym, coaching, or fighting,” he said. “I try to lay it all out there, and hopefully people see the heart and the passion I have for the sport. I truly do want them to know that it’s not just something I’m fortunate to be doing, but that it takes hard work to do what I do.”

That kind of ability to work through the ups and downs in the gym, on the mat, in the Octagon, or in life in general, is always admirable. Munoz hasn’t gotten any favors along the way, but he appreciates that fact because it’s made him who he is today.

“I’ve always had adversity in my life, and I’m thankful for that because without that, I wouldn’t be able to fight through or get through a lot of the things that I’ve been through,” he said. “I’ve lost a lot of times, but I think champions aren’t measured by how many wins they have but how many times they pick themselves up after a loss or failure. In my wrestling career I wasn’t one of those guys that was so talented that I could just beat everybody; I had to work hard to get to where I was, and that’s how it is in my fighting. I truly believe I’m one of the hardest workers in the sport and if I see somebody working harder, I try to work harder than him. That’s just who I am and it’s how I’m always going to be, and I think that’s how I was made and programmed.”

His first loss in the Octagon, a chilling head kick knockout by Matt Hamill in March of 2009, could have been enough to deter anyone from furthering their career in prizefighting. Being a husband and father of four would be even more of a push in the opposite direction, but instead, Munoz bit down on his mouthpiece, dropped from light heavyweight to middleweight, and got back to work.

He won a dogfight with Nick Catone five months after the Hamill bout, tore through Ryan Jensen at UFC 108, scored a come from behind knockout of Kendall Grove at UFC 112, and lost a close split decision to Yushin Okami last August. Then came the Simpson bout and a reminder why you should never sleep on Mark Munoz. If you keep him down, it will only be for a moment, and then he will come back at you with a ferocity you probably can’t deal with.

“I believe everything happens for a reason, and without those ups and downs, it wouldn’t define the person that you are,” he said. “I think you need downs to be able to show how much you can go up, and without the downs, you wouldn’t have that much character. It takes those valleys to be able to enjoy the peaks, and that’s what life is all about. You’ve got to know how to fight, and to fight for what you want in life and what you need.”

And call me crazy, but I thought that in the midst of the Simpson match, a bout that could make the heartiest of fight fanatics wince, I saw Mark Munoz smile.

“I love competing and I love fighting, and I wouldn’t be doing it if it were otherwise,” he said. “This is what I do right now, I enjoy what I do, and this is definitely a passion of mine. I’ve been competing for a long time, and just to be in there and to do what I love, of course I’m gonna have a smile on my face.”