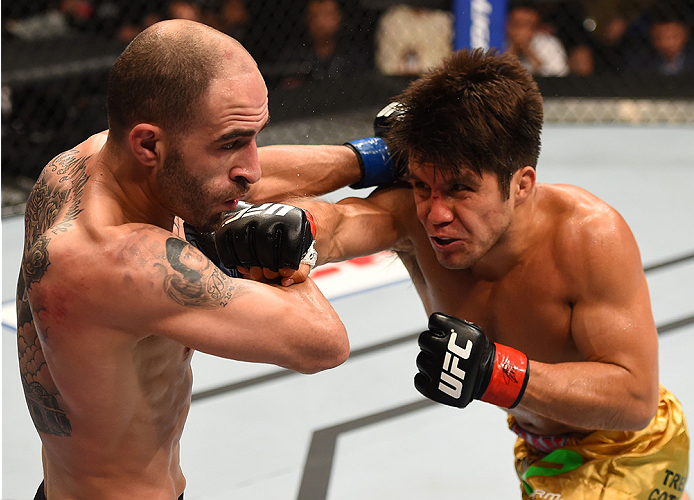 When asked what rattles him, flyweight Henry Cejudo, always a thoughtful interviewee, ponders the question briefly before answering.

“Nothing rattles me,” the flyweight contender said. “Maybe bad press. That’s the only thing that can rattle me. I can’t think of anything else.”

No fear of spiders, heights, or open spaces?

“No,” he laughs. “Maybe fighters making up lies and talking about your character. That’s something I don’t like. It’s okay to say stuff and be funny, but once you start getting into someone’s character, that’s something I take a little personal.”

It’s one of those questions you normally know the answer to before you ask. But with Cejudo, you actually believe him, and in his case, that belief comes from a seemingly random occurrence during a previous interview. Calling from his hometown in Arizona during flooding that was so severe it made national newscasts, Cejudo described the scene as he drove through the streets but didn’t miss a beat when discussing his upcoming fight. Of course, during the interview it was impossible to get a bead on the severity of the situation, but seeing the newscasts put a new light on everything.

Henry Cejudo doesn’t get rattled by anything. So when he got hit with a dose of food poisoning before his UFC 188 bout against Chico Camus in June, it was just a bump in the road, nothing to get sidetracked by.

“I was ready,” he said. “The way I see a fight is as a fight. I understand it’s mixed martial arts, but it’s all just a fight, so I understand that I might not feel well, that I may be caught with a certain punch, but everything will be okay and that’s all there is to it. It’s just the way I see things.”

Cejudo, a 2008 Olympic gold medalist in freestyle wrestling, won the fight, outpointing Camus over three rounds, in the process of moving to 9-0 as a pro and 3-0 in the UFC. The victory also prompted fans to start beating the drum for the 28-year-old to get a crack at UFC flyweight champion Demetrious Johnson, but first there will be Jussier Formiga in Monterrey, Mexico this weekend.

Before the UFC had a flyweight division, Formiga was seen as one of the best, if not the best, 125-pounders in the world, and after a rough start to his career in the Octagon, the Brazilian has regained that status. But Cejudo is not intimidated by his more experienced foe.

“He’s another human being that puts his pants on the same way I do,” he said of Formiga. “He’s crafty with his submissions, and you have to respect that, but I believe I’m just a tougher human being and I believe that I’m a better fighter.”

Cejudo will also have home field advantage, as the Mexican-American battles for the second consecutive time in Mexico. Yet as he points out, it’s an advantage he doesn’t really get a taste of until after the fight is over.

“I’ve got tunnel vision,” he said. “When I see my opponent, that’s all that I see. I don’t see thousands of people. And I just go in there and scrap. Obviously the people are there, and I do see them when I come out.”

He laughs, knowing that it seems unbelievable that he can shut out an arena full of fans cheering for him, but when you’ve competed for as long as he has at the elite level, you have to find a comfort zone wherever you can find it. And for Cejudo, there’s no better place to find peace than in the middle of competition, so expect to see even more of him in 2016.

“I want to continue to get better as a fighter, continue to be a role model for a lot of people and just do my best,” he said of next year’s plans. “That’s all that I care about. I don’t think about winning. I think about doing things right, and when I do things right, things fall into place.”

“My goal is to be a world champion next year, for sure,” he said. “I want the belt.”

Does the Olympic gold medalist have a place set for it yet?