Yoshihiro Akiyama: Winning is the Only Motivation

"To win the fight. That’s the only motivation." - Yoshihiro Akiyama 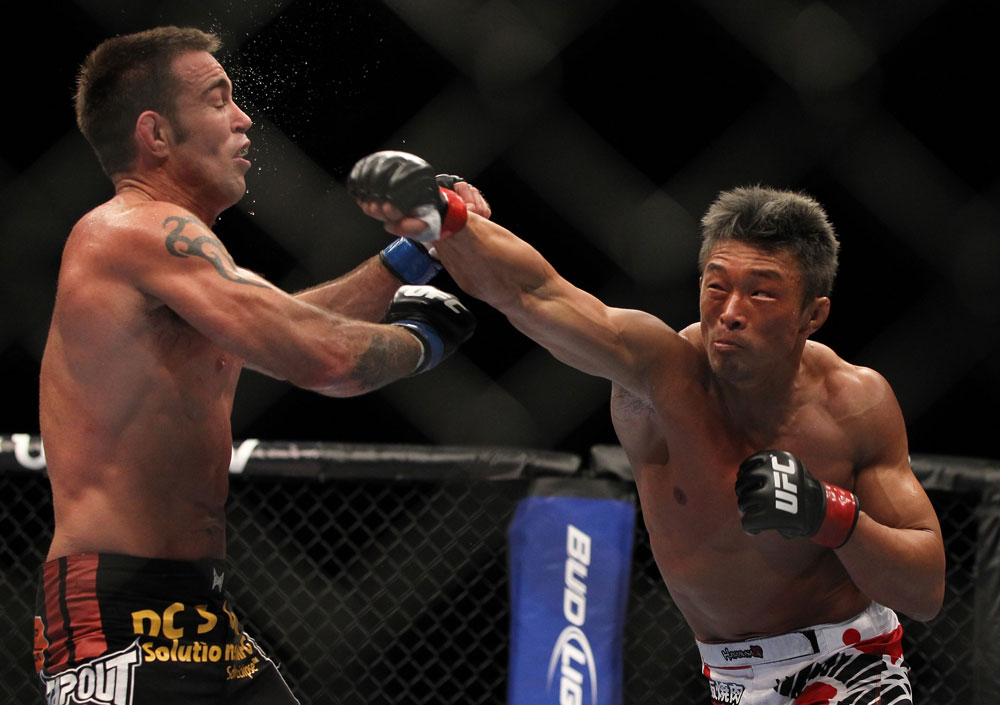 The typical question after a fighter experiences a long layoff is “what did you miss the most?”

The typical answers range from the honesty of saying “a paycheck” to the more expected “the competition.”

Yoshihiro Akiyama has never been a typical fighter, so his answer to that question is all his own:

This Saturday, the man dubbed “Sexyama” by his army of fans returns to active duty for the first time since a February 2012 bout with Jake Shields, and in the opposite corner is another fighter making his first appearance in two years as well. It’s a fight loaded with intrigue and expectations, mainly expectations, because few fighters have been in demand like the 39-year-old Osaka native.

“I appreciate their support very much,” Akiyama said through translator / manager Takashi Iizuka. “I think the MMA fans are warm-hearted people.”

Akiyama has always given them plenty of reason to cheer, both before his UFC debut in 2009, and during his Octagon run, where he has earned three Fight of the Night awards in five bouts.

That’s the good news. The bad news goes back to Akiyama’s initial statement about missing victory. It’s a feeling he hasn’t experienced since that UFC 100 debut against Alan Belcher in 2009, as he’s lost four straight to Chris Leben, Michael Bisping, Vitor Belfort, and Shields. All but the Belfort fight were competitive, but four losses are four losses, and Akiyama has had plenty of time to figure out what’s been going wrong.

The first order of business was a change in weight class from 185 pounds to 170, a move he made in 2012 for the Shields fight.

“I found and think that welterweight best fits to my body size,” Akiyama said, and while a decision loss was the result of their UFC 144 bout, Shields can be a nightmare style matchup for anyone when he’s on his game. So you can chalk that one up to a tough loss to a tough fighter. But during a training session for a UFC 149 bout with Thiago Alves, Akiyama was injured and forced from the fight. Only now will we see him return.

“I injured my knee and had an operation,” he said. “It took a very long time to fully recover and come back to the Octagon.”

At least in Sadollah, Akiyama will be in against a striking-minded opponent who won’t dwarf him in size like Belfort or have a significant speed advantage like Bisping. If Akiyama is back in form, we’ll find out this weekend.

“He doesn’t present and particular difficulties,” Akiyama said of his opponent. “I think he is a tough and superb fighter.”

Originally scheduled to face Australia’s Kyle Noke, Akiyama said there were no distractions by the change of opponent, noting that “I always try my best performance, whoever the opponent is.”

And that’s why his fans love him. But can he make a run in a division that is more wide open than it was two years ago, but also one that’s tougher than ever? Akiyama even admits that it’s a different world at 170 pounds these days.

“The fight level has risen higher year by year and the number of fighters increases,” he said. “I think there will be even more good fighters towards the future.”

There’s still room for a veteran warrior though, and if Akiyama wins on Saturday, the welterweight landscape could begin to shift once more, leading to more “Sexyama” than ever before. But the only part of that sentence Akiyama is interested in is the word “win.”

“To win the fight,” he said. “That’s the only motivation.”