“It is always important to make the fans excited, but more important is to be heading for victory.” - Yoshihiro Akiyama 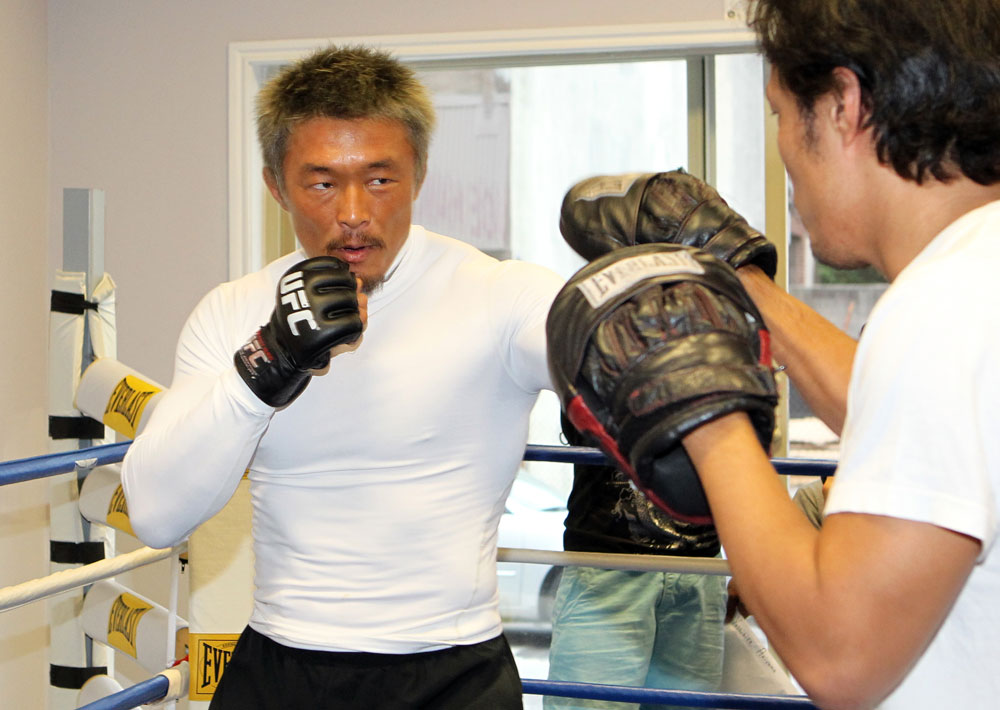 In an instant, Yoshihiro Akiyama found out that there are more important things than fighting. As a horrific earthquake assaulted his home country of Japan in March, the last thing the middleweight contender from Osaka was thinking about was his UFC 128 bout with Nate Marquardt.

“I was at home,” said Akiyama, who was on the 41st floor when the earthquake hit. “I dashed out of my home by the emergency stairs.”

Thankfully, Akiyama and his family were safe. So many others were not so lucky. Akiyama, obviously in no condition mentally to fight, withdrew from the Marquardt bout and instead focused on helping his nation rebuild, participating in a number of fundraising efforts to raise money for those affected by the tragedy.

Eventually though, it was time for Akiyama to get back to fighting, and he chose not to ease back into his day job; instead, he agreed to face Vitor Belfort in this Saturday’s UFC 133 co-main event. It’s a fight he’s unquestionably looking forward to.

“I think that Mr. Belfort is very strong, a perfect fighter, and he is actually one of my icons,” said Akiyama through translator Takashi Iizuka. But it wasn’t exactly a smooth transition from dealing with the devastation in his country to getting back into the gym.

“Immediately after the earthquake, it was difficult,” he admits. “But after a while, I could concentrate on training and think about the bout.”

And this one may be the most important of his UFC career. Three fights in thus far, Akiyama only holds a 1-2 record, but if you look closely, those three fights were against Alan Belcher (win), Chris Leben and Michael Bisping (losses), and all three earned Fight of the Night bonuses. So there’s no question that Akiyama is putting on memorable performances, but three losses in a row should he lose to Belfort isn’t a good thing, and he knows it.

“It is always important to make the fans excited, but more important is to be heading for victory,” he said. “It is hard to deal with losses. But at the same time, a new bout is a new challenge.”

For Akiyama, the real challenge is to get to a point where he’s still putting on compelling fights, but not dropping his hands and getting into wild slugfests which have allowed opponents like Leben and Bisping to capitalize. Against the hard-hitting Belfort, if you let him crack you one too many times, it’s game over. Akiyama realizes this, and it’s been on his mind from before the Marquardt fight, when he said, “I've been specifically focusing on how I can score enough points to win. From the past three matches I experienced in the UFC, I was too stuck in my own way and I wasn’t thinking about the result of the match.”

So how has he progressed in that area?

“My punching has made progress, thanks to a lot of practice and experience.”

That’s a positive development, both for Saturday’s bout and for the 36-year old Akiyama’s longevity in the game. Then again, he is a warrior in the Octagon, so you get the impression that the first time he gets hit, it’s on. It’s just his way, one he says comes from his “nationality and judo experiences.” No one who has seen him fight is complaining, whether it’s in his home country, or in the United States and England, the two countries that have been treated to a dose of the man his fans have dubbed “Sexyama.”

“I’m very grateful to have such fans,” said Akiyama. But is it still worth it to put up with all the rigors of the fight game after all these years?

“Yes, I enjoy it, but the bout is always tense.”

Saturday night’s meeting with Belfort will be no different, but tense drama and excitement is what we’ve come to expect from Akiyama, and this time, there’s even more meaning, as he’s fighting not just for himself, but for Japan.

“I hope that the people in Japan will be brave during these difficulties, that they will see a good fight from me and hopefully a victory on August 6th.”